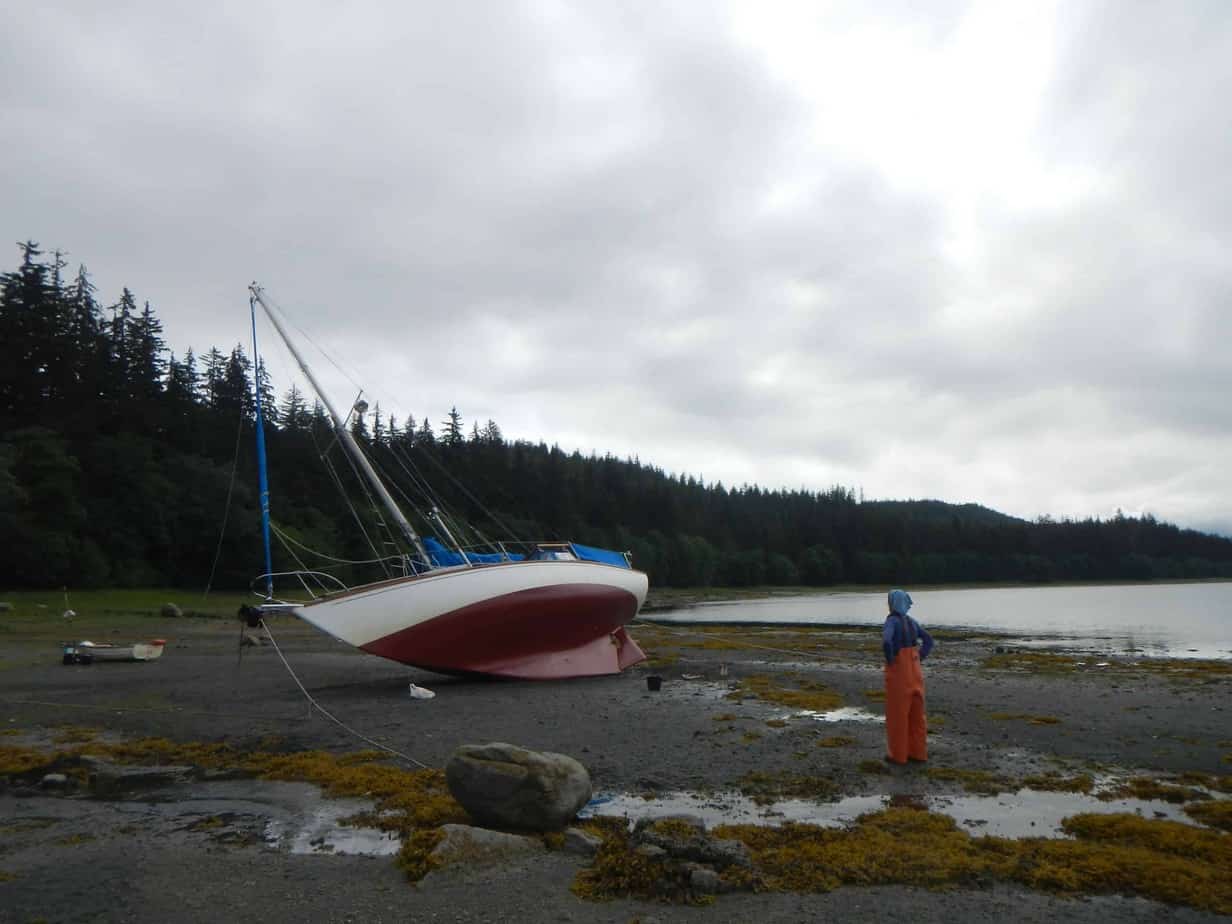 At 24, John Pennington and his wife Kara Potter set out to circumnavigate in their Cape Dory 30. Over the following 4 years they occassionally found themselves in far-flung places where haulouts were either unavailable or prohibitively expensive. In the guest post below, John explains how they beached, cleaned, and painted their boat over two-days while overwintering in Alaska.
John and Kara completed their circumnavigation at 28 (they are now 32 with a 7 month old baby boy) and wrote a very entertaining book about their adventures that you can find on Amazon (rated 4.7/5 with 49 reviews).

How to careen a sailboat

Usually, I can talk my wife, Kara, into a refreshing swim to defoliate the fouled hull.  And was it ever foul; over the winter some sort of orange slime infestation had coated Orca’s sleek hull in what looked like melted cheese.

Kara is usually an avid snorkler, but I was getting nowhere in this quest for a spring hull cleaning.  Obviously, her bikini was unsuitable.  I admitted that even her wetsuit would be insufficient, but I’d hatched a brilliant plan for Kara to wear my larger wetsuit over hers.  How else were we going to get a winter’s growth cleared off in this tiny corner of Alaska?

With an eye roll, Kara set off down the dock to talk to someone who wasn’t an idiot.  We’d made lots of friends, mostly because kind locals had been stopping by all winter to donate clothes.  When the two California kids sailed into town from Hawai’i, in October, wearing cotton tee-shirts and boardshorts, the community decided they’d have to take action.  We were a great source of winter entertainment.

We talked to Blaine and Monique, permanent liveaboards and professional sailing charter captains with Sound Sailing.  They were clear on two things: first, in Alaska, it’s considered bad form to go overboard under any circumstances–even the harbors often have significant tidal currents.  Secondly, those same tides obviate the need for Travelifts.

Sure, Orca had been aground before.  Embarrassingly often, actually, and sometimes quite traumatically.  But it hadn’t really occurred to me to do it on purpose.  And on a falling tide, no less?  The price tag on this approach, however, was intriguing.

We chose a tiny tide pool of an anchorage fringed by dense, presumably bear-infested woods.  The shoreline was hard sand and flat, though there were a few glacial erratics littered about.  Leaving the boat anchored, we walked the area at low tide and had several days of “lively discussion.”  Finally, I pounded a tall cedar stake into the agreed patch of shoreline.  We tied a handkerchief exactly 4’3” above the sand, marking Orca’s draft.  We looped line around a nearby boulder and left the end to float on a fender. 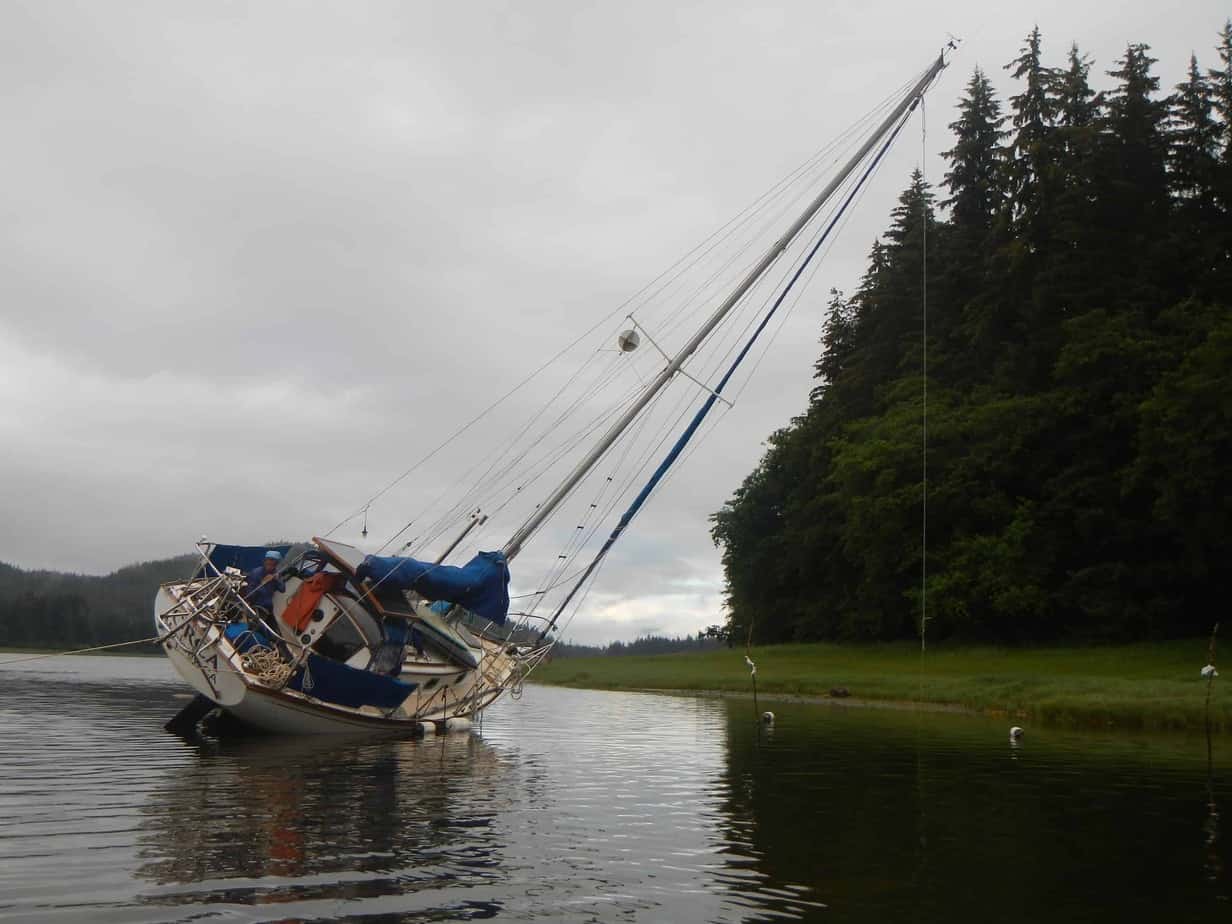 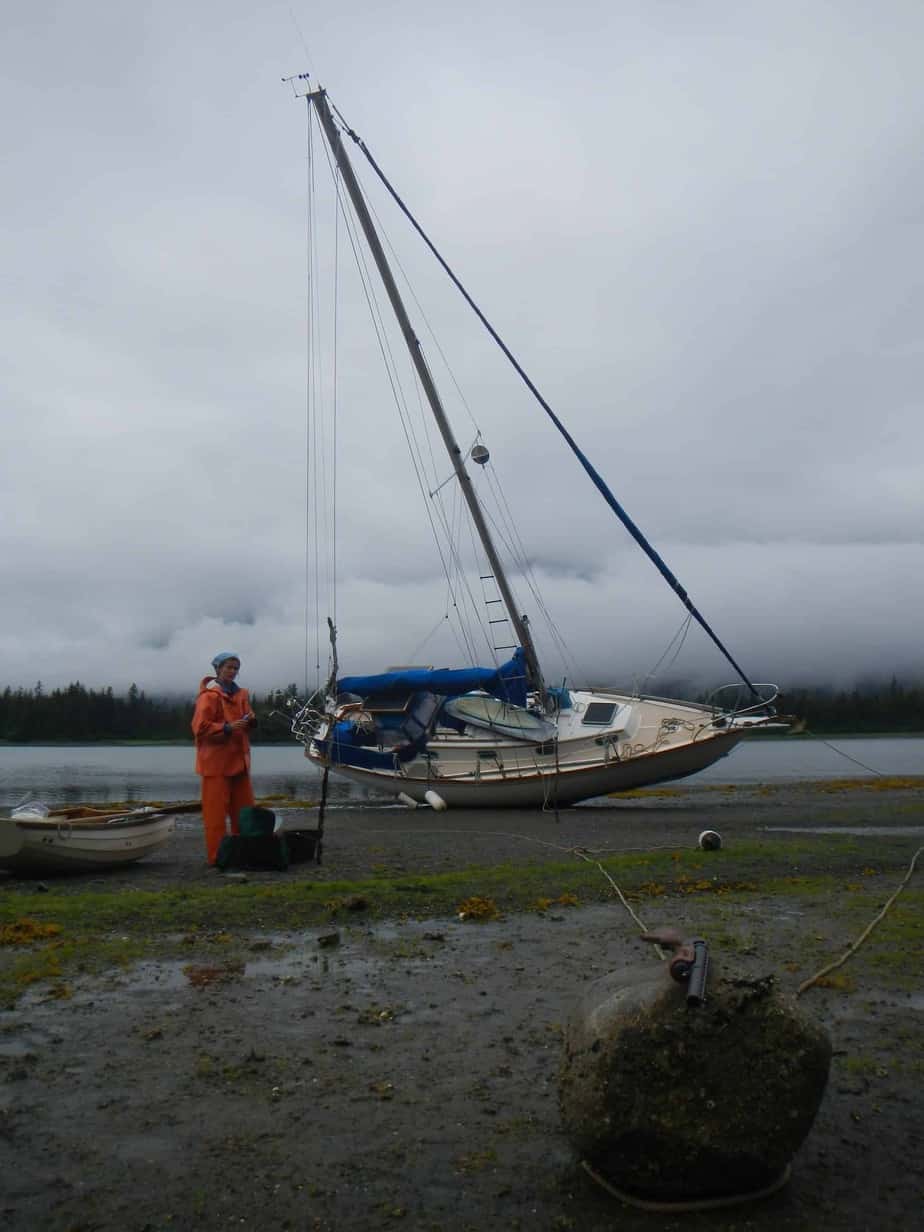 On the next falling tide, when the handkerchief peeked above water, we pointed Orca at the stake and motored ahead until the keel hissed aground.  Kara fished out the fender, tied the boulder-line to the spinnaker halyard and winched it tight until we were heeling towards the woods.  The hull settled over remarkably fast; in this area, the tide drops an inch a minute.  After that, it was simply a matter of scraping off growth from Orca’s exposed port side, a quick roughing up and a rinse in freshwater from the nearby stream before painting. 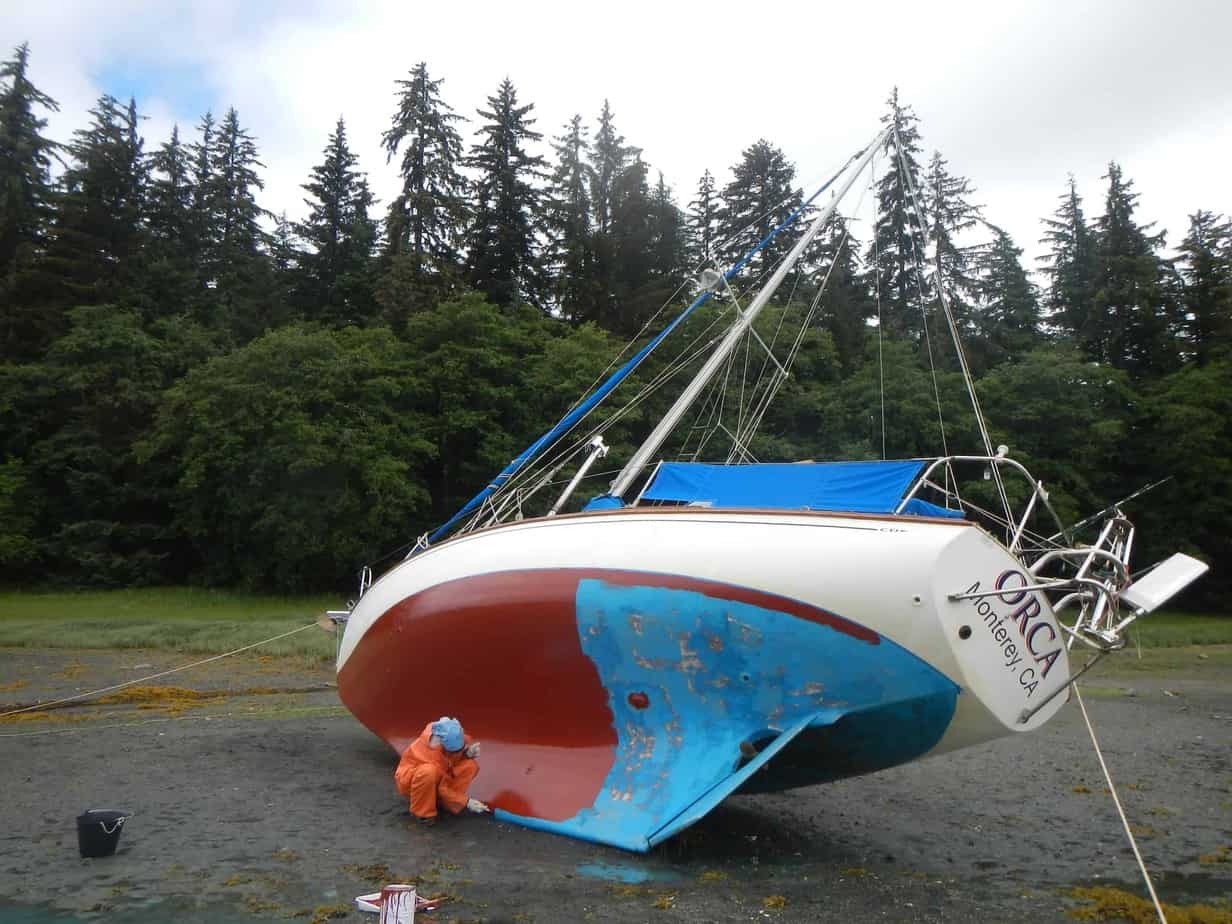 Orca floated off easily, the rising water briefly reaching the toerail before she came upright.  We puttered back out to the anchorage more than a little tickled to be spending the night comfortably afloat rather than perched on blocks and stands.  The next day, with more confidence, we laid her over on the opposite side and finished the job.

The other common approach to antifouling without a lift is the tidal grid–usually spaced railroad ties adjacent to piles or a pier.  The boat is carefully secured fore-and-aft, athwartships, and a slight heel induced so that when the tide drops, the keel settles on the blocks and the boat balances upright, leaning lightly against the piles. 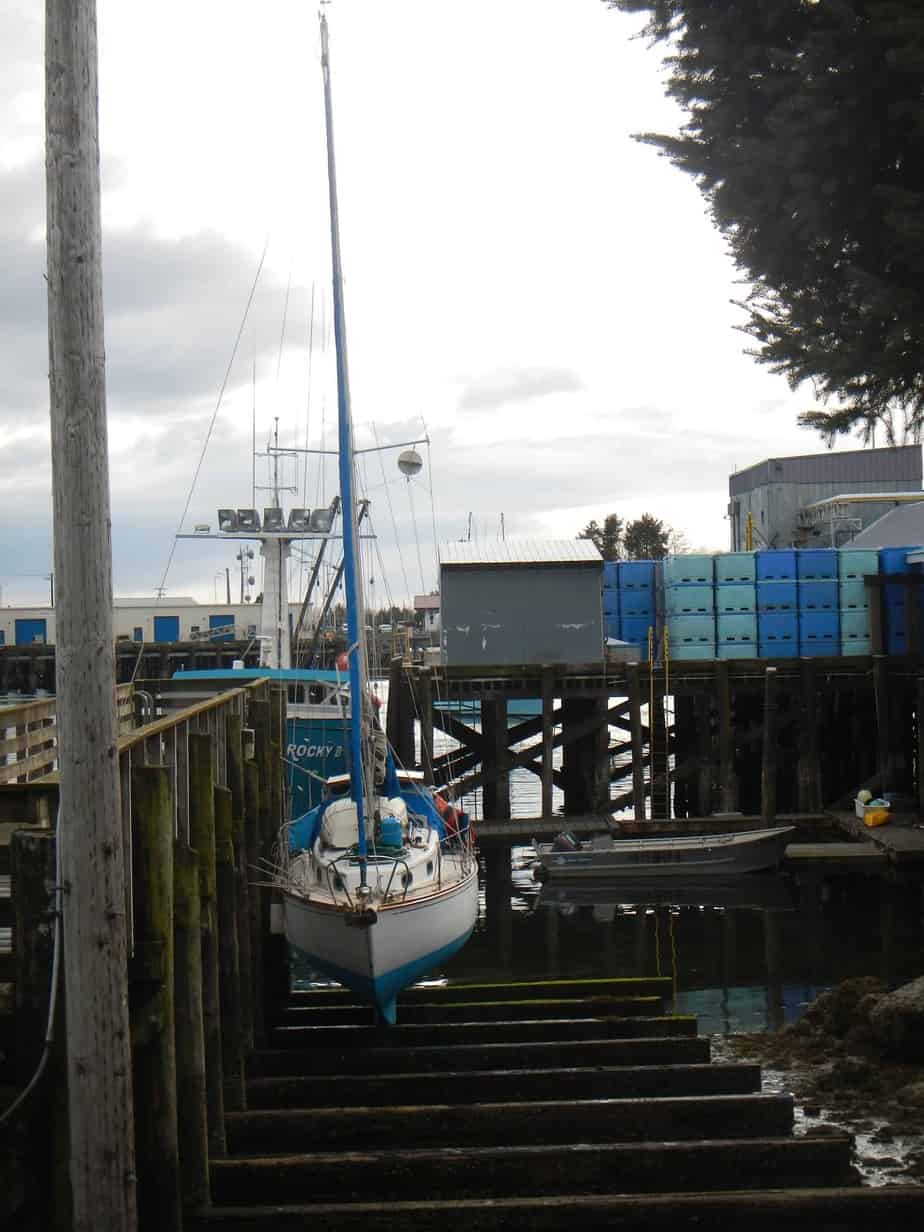 We’ve used this method as well, and while it has certain advantages–access to both sides of the hull in one tide, for example–I found it more technically challenging and, quite frankly, frightening as a novice; the cost for a misstep can be high (check this blog post by Kris on Taipan–only very quick action averted disaster).  Although it takes longer, we prefer beaching for the low risk, unfettered access to the whole bottom of the keel, beautiful scenery, and the confidence to use the technique in a real emergency. 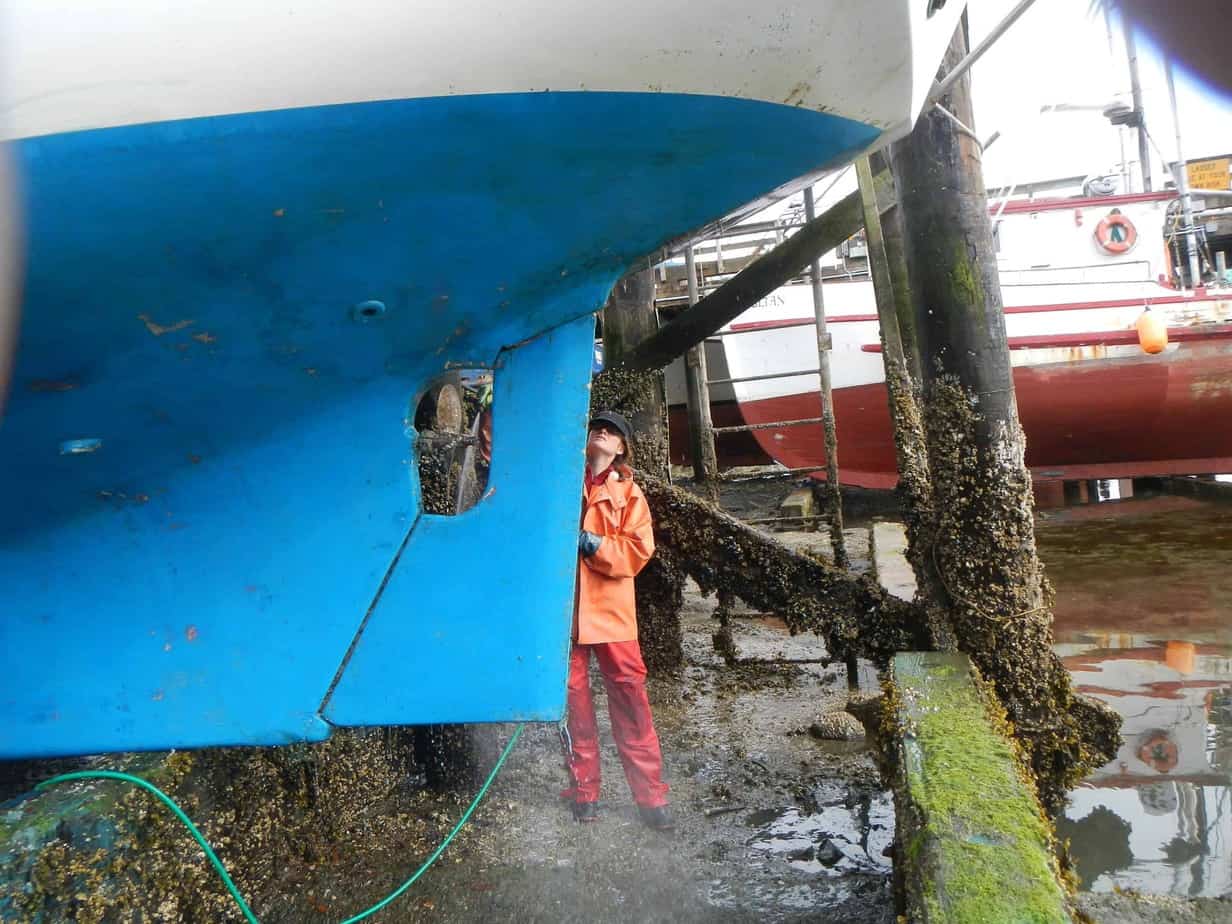 Regardless, the success of either approach depends almost entirely on preparation–the grounding takes just seconds and the opportunity to make subsequent adjustments to the boat’s position sometimes lasts only minutes.

My checklist (expanded, legible, and without the beer stains) looks like this:

Done with plenty of forethought, I believe a gentle beaching can be easier, faster, and less stressful on boat and crew than the usual arrangement of machinery, straps, cradles, props, and blocks found at most yards.  And after the glow of satisfied self sufficiency and the clean-bottom boatspeed excitement wears off, I still enjoy the extra heft in my back pocket: a thicker wallet and an ace-in-the-hole if we’re ever holed when gunkholing far from the boatyard.

Our marina is not hurricane/typhoon safe. It does not have a travel lift, but it does have a really big tractor converted to pull boats out. We have a 41 foot, 18 ton sailboat that is hauled out on a custom built trailer. The typhoons here range all the way up to cat 5 and we are guaranteed to have at least 2 or more each season., so we haul out a lot.

Yes, very clever - I recall seeing this on the movie "Master and Commander". But what do we do in the Great Lakes?

Hmmm good question! Would love to hear about the cheap work arounds Great Lake sailors use. When we sailed on Lake Ontario, we had a trailerable boat so never ran into that issue.