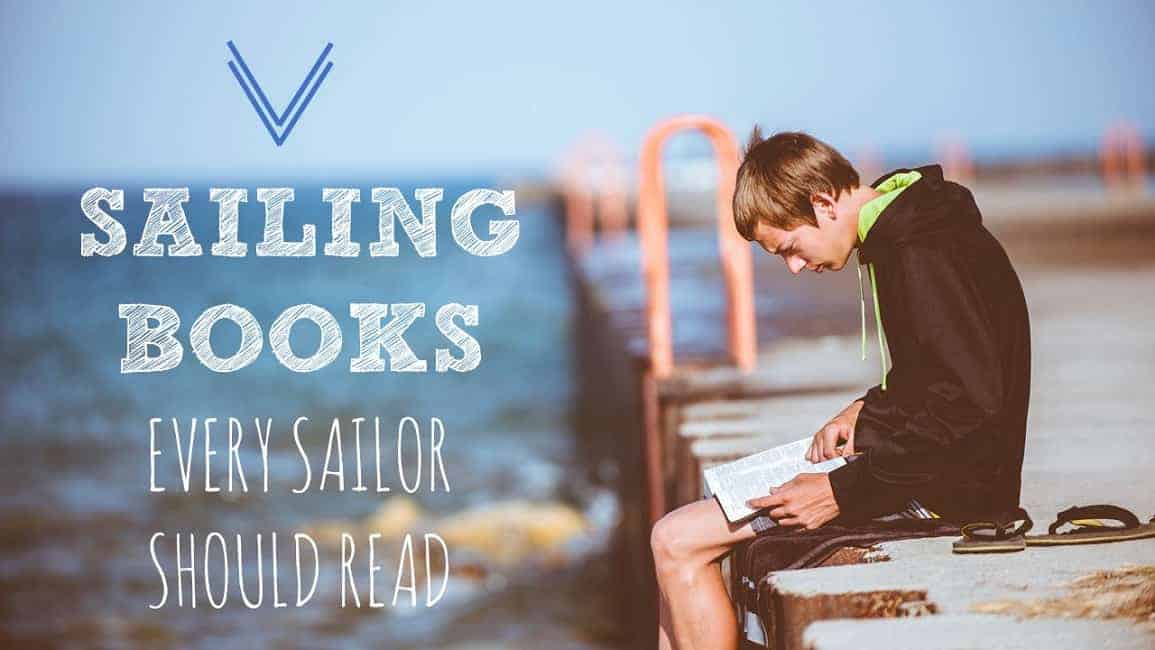 THE BEST SAILING BOOKS INSPIRE YOU TO GET OUT THERE

Whether you’re looking to do some armchair sailing during the off-season or stock up your floating library with sailing stories for summer cruising, these are the best sailing books for adventure and inspiration.

In this list, you’ll find books about sailing around the world, first-hand accounts of daring Antarctic adventures, true crime nautical thrillers, and meditative musings about life at sea. Be sure to let us know your favorite sailing books in the comments below.

A quick note that this post contains affiliate links (so if you purchase through a link we’ll earn a small commission). All the opinions are our own.

Best books about sailing around the world

This is the book that inspired us to buy a boat and go sailing! Bernard Moitessier was a French sailor who raced in the 1968 Golden Globe, the first single-handed around the world race.

He sails from England alone for several months and when it seems he is just about to win…(well, I won’t spoil it for you!). His account is a great adventure story and also a deep meditation on zen philosophy.

Joshua Slocum’s Sailing Alone Around the World is a really interesting account of the first solo-circumnavigation. It would be an interesting account even if it were written today but is especially so due to the fact that the events he recounts take place prior to the 20th century.

In many ways, Slocum was the first cruiser and the trouble he gets himself into, the people he meets, and the places he goes are things to which we can all relate.

A World of My Own – Robin Knox-Johnston

Robin Knox-Johnston’s account of his non-stop solo-circumnavigation of the world. He presents a vivid and  vulnerable portrait of a sailor attempting to accomplish what most thought impossible.

It’s a testament to the ability of the human mind to overcome seemingly insurmountable obstacles and heartening for fellow sailors who will encounter situations that put their own courage to the test. It’s a great read and details one of the most incredible feats of the modern era.

Dove is a book for those who dream of sailing around the world.

In 1965, 16-year-old Robin Lee Graham set off from California in 24-footer on a solo round-the-world voyage. After 5 years and 33,000 miles, he returns with a wife and daughter. His adventures in between are recounted in this best-selling book.

In August 1966, Francis Chichester set out from Plymouth on his 53-foot ketch “Gypsy Moth VI”. He would become the first person to make a one-stop round the world circumnavigation.

Chichester’s journey set records, earned him a knighthood, and fueled the ambition of the next generation of sailors, to become the first to sail around the world non-stop in the 1968 Golden Globe Race.

At 18 years old, Tania Aebi was going nowhere, until her father presented her with an ultimatum: she could go to college or get a boat. She chose the latter and for the next two and a half years and 27,000 miles, she sailed the world with only her cat as a companion.

7. An Island to Oneself – Tom Neale

Considered one of the greatest adventurers of our time, Tilman has sailed and climbed in some of the world’s most remote and environments. His sailing books are must-reads for those who dream of straying from the beaten path and sailing in high-latitudes.

9. Kon-Tiki: Across the Pacific in a Raft – Thor Heyerdahl

Kon-Tiki was the first book about sailing that I ever read.  And really it is more about adventuring than sailing. The sheer foolhardiness of building a balsa wood raft and sailing it 4000 miles from Peru to Tahiti is enough to pique the interest of any adventurous soul.

It’s fascinating to read the various ways that the four men on the raft handled the, at times, boring, stressful, exciting, and survival situations in which they were placed.

And The Sea Will Tell – Vincent Bugliosi

In this terrifying true story, two couples sail to a remote Pacific atoll, but only one couple makes it off the Island alive. As told by the defense lawyer, Vincent Bugliosi (who also prosecuted Charles Manson), the investigation that follows is a riveting true-crime murder mystery.

And the Sea Will Tell reconstructs the events and recounts the trial that follows. The first half of the book is a real page-turner. The second half delves into technical aspects of the court case which makes for a less compelling read (unless perhaps you’re a lawyer!).

A real-life thriller, this book is likely to scare you out of ever leaving land, but it will also give you an appreciation of the sheer power of weather in the Atlantic Ocean.

Junger tells the story of the Perfect Storm, a record topping storm that hit the east coast of North America in the fall of 1991. It follows the accounts of the crews of the fishing boat, a sailboat, and the U.S. Coast Guard as they battle to survive the severe conditions.

A staggering survival story written by Steven Callahan about 76 days spent in a life raft in the Atlantic Ocean.

Only six days out, Callahan’s small sloop capsizes and he’s left battling for survival in an inflatable raft. “Adrift” was on the New York Times bestseller list for more than thirty-six weeks when it first came out.

Godforsaken Sea recounts the running of the 1996-97 Vendée Globe. On 3 November 1996, sixteen sailors set out to race around the world single-handed. Only six completed the course. The book explores what compels a sailor to go to sea why the Vendée Globe racers were willing to risk everything.

The story of a single mother in the 1920s with 3 children and a dog, exploring Vancouver Island’s inside passage.

In 1926 Muriel “Capi” Wylie Blanchet, a Vancouver Island resident, tragically lost her husband Geoffrey when he took their 25 ft cabin cruiser “Caprice” out on a solo camping trip and never returned. Rather than sell the boat, she took her three young children and dog on summer sojourns, exploring the pristine BC coast with nothing but her wits to rely on.

She documents her many adventures: piloting through whirlpools, run-ins with bears and cougars, climbing thousand-foot cliffs, and exploring abandoned First Nations villages. Her account is both inspiring and a reminder to slow down, appreciate the beauty of nature, and be present with those you love.

One of the few books to make our list of best sailing books that doesn’t take place on a sailboat!

Lin and Larry Pardey are living proof that you don’t need to be wealthy to see the world. They traveled for 26 years (covering the equivalent of 5 circumnavigations) in their home-built cutters, Seraffyn and Taleisin.

In Seraffyn’s European Adventure the young couple journey in their 24ft boat to the Baltic, Denmark, Sweden, Finland, Germany. Without engine, electronics, or gadgetry these scrappy sailors accomplish remarkable things through sheer endurance and resourcefulness.

Their stories are as salty as it gets and their message is freedom: “Go small, go simple, go now.”

16. The Log from the Sea of Cortez – John Steinbeck

An account of the six-week scientific expedition made by John Steinbeck in 1940 with marine biologist Ed Ricketts, collecting marine specimens as they travel through the Sea of Cortez.

If you’ve ever cursed your boat, you’ll sympathize with the exasperated (but ever hopeful) Mowat in “The Boat Who Wouldn’t Float”.

Seeking adventure, Mowat hopes to buy a boat, a proud and seaworthy vessel, and roam the seven seas. Instead, he gets the worst boat ever and nearly goes mad trying to keep it from sinking.

The book is a humorous and heartfelt account of fixing up a boat in a small Newfoundland community.

Raban sails from Seattle to Juneau in a small boat, deftly describing the history of First Nations, Captain Vancouver, and life at sea as he travels up the coast.

More than just a travelogue, Raban recounts personal challenges: his relationship with his father, and being a good dad to his young daughter Julia. The Pacific Northwest history is absolutely fascinating and Raban is a deep and thoughtful soul who you can’t help but empathize with.

With wit and style, Tristan Jones tells the story of his 6-year voyage where he sailed a distance equal to twice the circumference of the world. His adventures include capsizing off the Cape of Good Hope, starving in the Amazon, and dodging snipers on the Red Sea.

John McPhee, considered one of the pioneers of creative nonfiction, recounts a 42-day journey from Charleston down the Pacific coast of South America on one of the last American merchant ships, the S.S. Stella Lykes.

An account of an ambitious father-son project: build a boat and take on Cape Horn. With nothing more than a compass, sextant, and pet cat, the father and son duo are tested on an incredible voyage. Told in alternating sections by father and son.

No list of classic sailing novels would be complete without Moby Dick.

The story follows a whaler captain’s quest for revenge against the giant sperm whale, Moby Dick. Written by Herman Melville in 1851, it’s considered one of the “Great American Novels”.

23. The Old Man and the Sea – Ernest Hemingway

Written in 1951, The Old Man and the Sea was Ernest Hemingway’s last major work of fiction. It follows the story of a Cuban fisherman who struggles with a giant marlin off the coast of Cuba. The classic nautical novel was awarded a Pulitzer Prize for Fiction in 1953 and is one of the author’s most famous works.

Published in 1969, this nautical novel was the start of a 20-book series. Set at the turn of the 19th century, the story follows a young Jack Aubrey, who has recently been promoted to the rank of Master and Commander.

The best sailing stories are the ones you create!  Pick up one of these hardcover logbooks to record your nautical travels.

Looking for more great sailing stories? Check out our posts on sailing vlogs and sailing podcasts.

Do you have any suggestions for other inspirational sailing books? We’d love to get your recommendations – please leave them in the comment box below. 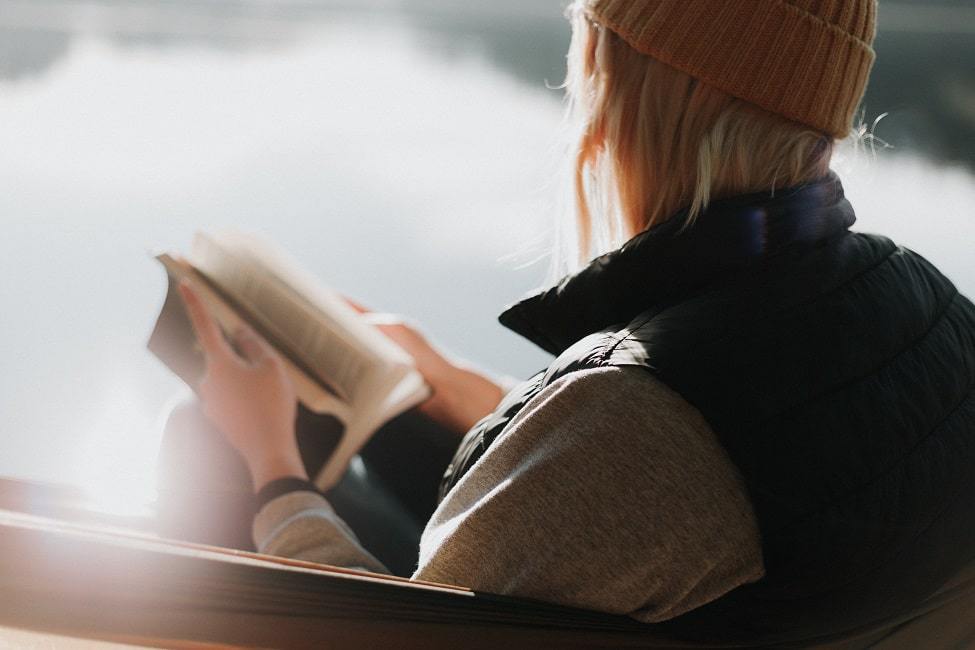 Hi there! Great post, but my all time favorite is “South Sea Vagabonds” by John Wray!

The Loneliest Race by Paul Gelder. Is a must read.

Thanks Niah. I've been thinking about writing a post on sailing race books - there are some many good ones!

Overlooked on this list and many others is the great "The Water in Between" by Kevin Patterson.

Hi Fiona n Robin, Hope you’re not missing the heat of the SP too too much. If I may suggest a few more books for your great list.

Anything by Moitessier of course, specially «Vagabond des mers du Sud» (telling of his learning to sail in Vietnam as a young man), and «Tamata et l’Alliance», (his last book written during his years living in French Polynesia) Quick english titles list here: https://www.amazon.com/s?k=moitessier+bernard&crid=DQW3GY4NSYPS&sprefix=Moitessier%2Caps%2C446&ref=nb_sb_ss_i_1_10

Anything about Éric Tabarly, there are one or two bios and he wrote one account of his winning the BOAC. https://www.amazon.com/s?k=tabarly&crid=C9Q57RE444SF&sprefix=Tabarly%2Caps%2C872&ref=nb_sb_ss_i_5_5

And my welsh mother in law would be very disappointed in me if I did not recommend Tristan Jones’ books. His are tall tales that sometimes strech believability, but they sure a great read. Typical welsh storyteller with a knack for spinning a good yarn with priceless tongue in cheek humour. Also of interest to handicapped sailors, Jones lost a leg to diabetes on one of his crossings, but kept sailing for many years afterwards. https://www.amazon.com/s?k=tristan+jones+books&crid=11M2GS14E6MD4&sprefix=tristan+jones%2Caps%2C1327&ref=nb_sb_ss_i_4_13

These are great! Thank you Jean. Hope you're finding lots of time for reading on the boat in paradise :)

You did miss a riveting true story, which won the National Outdoor Book Award for best book of the year! Journey of A Hope Merchant - from Apartheid to the Elite World of Solo Yacht Racing. by Neal Petersen

Wow this sounds fascinating! We'll check it out. Thanks Darlene.