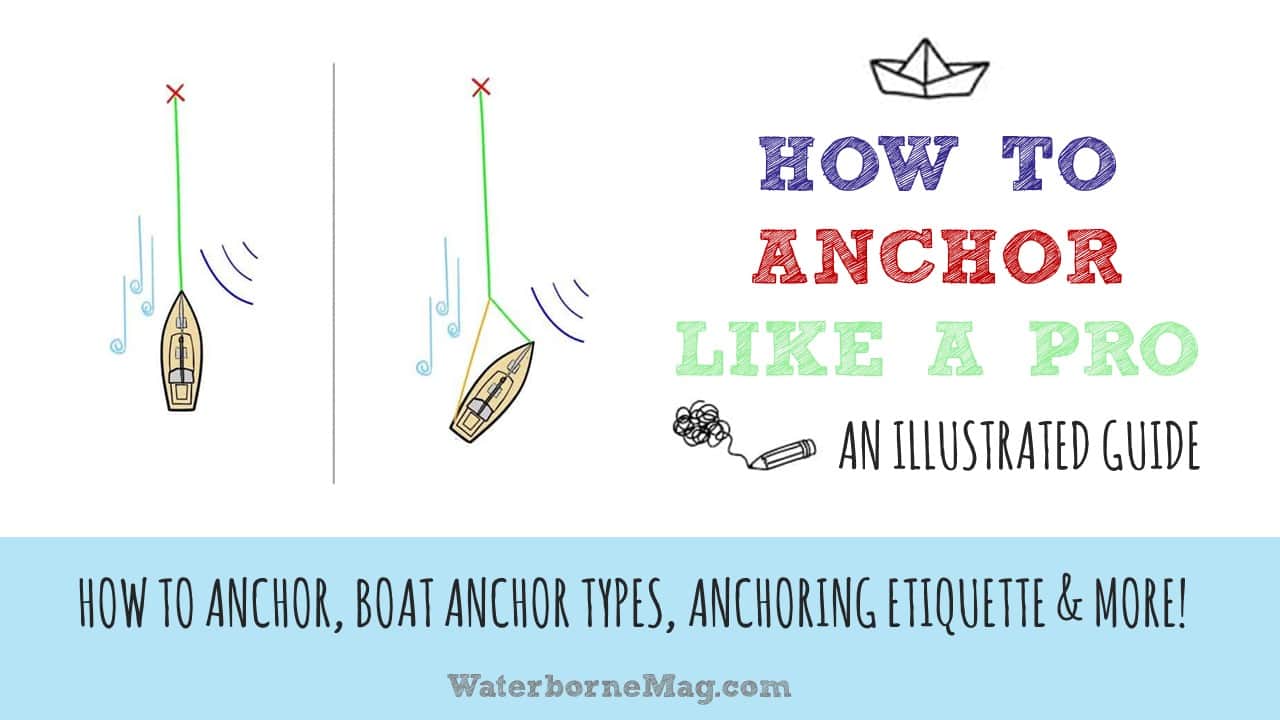 Anchoring a boat can be intimidating, but with the right anchor and some simple techniques it can be very easy and safe.  Learn how to anchor a boat in a variety of conditions below.

The size and type of anchor you will need is primarily based on three elements: boat weight, windage and bottom condition.  Each anchor manufacturer has a sizing guide based on your boat type and displacement, so it’s best too look them up individually. Here are the anchor sizing guides for Rocna, Manson, Lewmar (CQR, Delta), Danforth, and Fortress.

There is a new generation of modern anchors that are taking hold and are typified by Rocna and Manson. These new generation style anchors perform well in a variety of bottom conditions and often feature roll bars. But you’ll also find many sailors who swear by their older generation Bruce anchors and CQRs. Many of these anchors are available in galvanized steel or a (more expensive) stainless steel option. However, the stainless steel is more for looks and has no impact on anchor holding performance.

The following chart is a general guideline for how various boat anchors perform in different bottom conditions[1]:

Now that you know what anchor you want, here are a few tips on buying a boat anchor.

Where to find cheap boat anchors for sale

One of the great things about boat anchors is that they last forever! So there are tons of second-hand anchors for sale that work just as well and cost less than buying new. Of course, due to their weight, they’re expensive to ship so your best bet is to buy an anchor from a marine consignment store or boat junk yard near you. 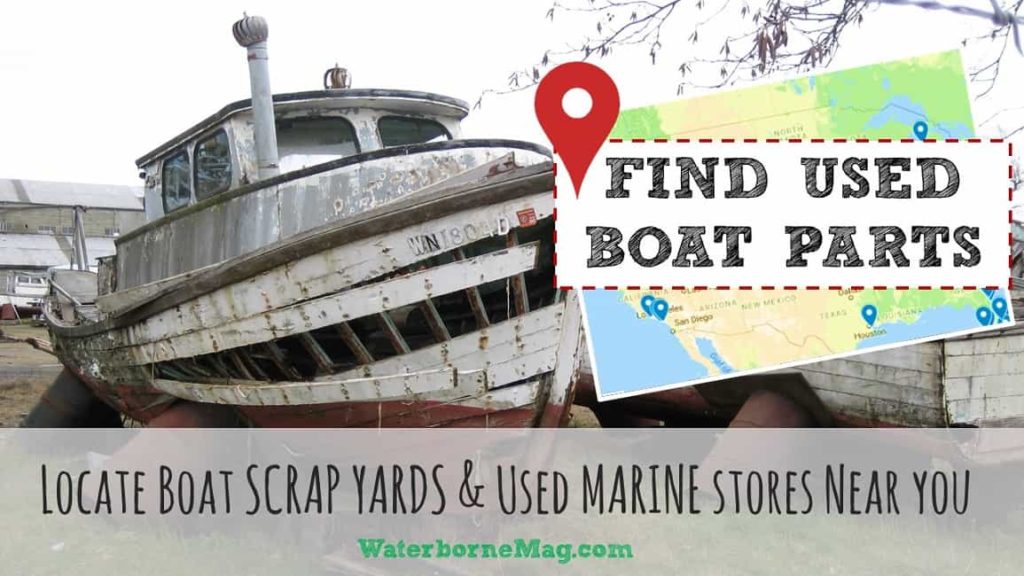 Budgeting for a complete anchor kit

There will be three major components to your ground tackle (your complete anchoring system) so be sure to leave room in your budget for anchoring accessories.

The larger the anchor, the more expensive. The anchor itself will cost more if you have a big boat. For example, a small boat anchor, say for a 22 ft boat, might only cost you $200 but for a 50 ft boat you could pay $1,000 or more.

At a certain size the anchor will become too heavy to retrieve by hand and you will need a manual or electric boat anchor winch. At the top of the line you can buy a wireless remote to conveniently raise and lower your anchor from anywhere on the boat. Anchor winches can be expensive (likely will cost more than the anchor itself) and time-consuming to install. Whether you can get away without a boat anchor winch, will depend on the size of your anchor and your physical strength.

You will also have to purchase anchor line, chain, or a combination of both. High-test anchor chain is the more expensive option ($4-11 per foot). Some cruisers choose all chain rodes for improved catenary and resistance to abrasion, but the general rule is to have at least 20′ of chain. See paragraph on “How Much Scope” below for how much line or chain you will need.

Anchoring systems can quickly become expensive but they’re also usually worth the investment. Even the most budget conscious cruisers we know tend to invest in this area, some even deeming it an “insurance policy” for their boat. With all that money dangling at the end of your anchor line, many cruisers set up tripping lines. This is essentially a float tied to the anchor that marks its position and can assist in retrieving the anchor if it becomes fouled.

How a boat anchor works

A boat anchor is a simple device. It is designed such that the more pull force applied in line with the shank; the more the anchor seeks to embed itself in the seabed. However, it is impossible to pull an anchor laterally due to the height or depth of the water between the boat and the anchor.  That’s where catenary and scope come into play.

Catenary is the name of the curve that is formed by the anchor rode (anchor line) between the boat and the anchor.  Scope is a ratio between the depth of the anchor plus the freeboard of the vessel and how much rode is deployed. Catenary and scope are both important in determining the angle at which the anchor is pulled.  The lower the angle, the better the anchor will perform. 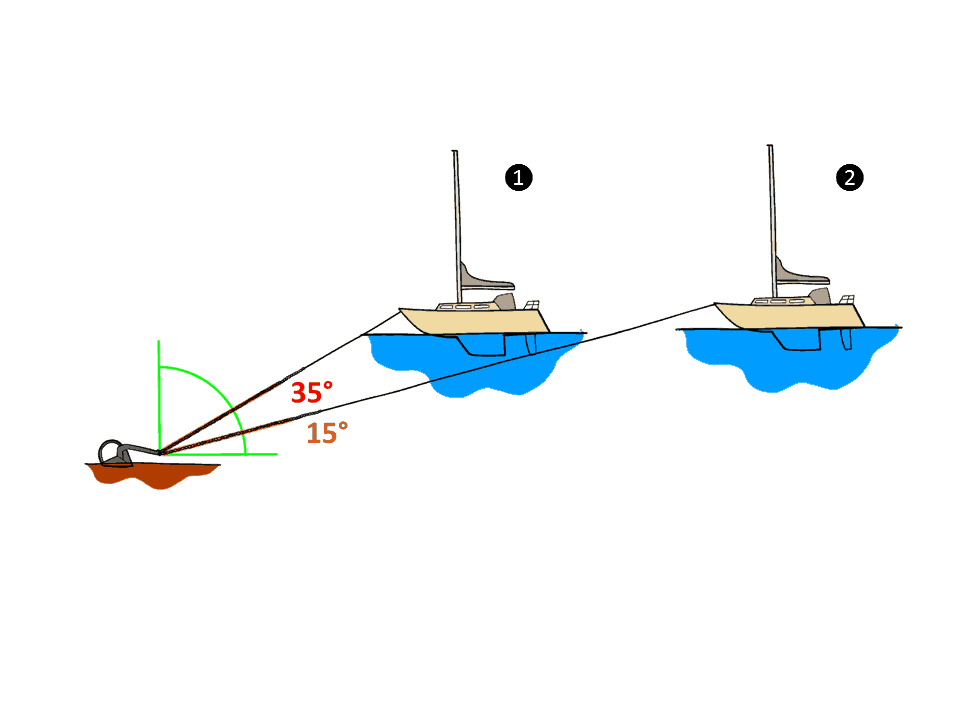 The more scope that is deployed, the deeper the catenary curve will be.  This is important because it determines the angle of pull on the anchor and acts as extra weight and friction on the seafloor. As wind or current increase the boat will move further from the anchor, decreasing the catenary and increasing the angle of pull.  In a strong windstorm, when the rode is tight and there is little to no catenary, the amount of rode deployed will determine directly the angle at which the anchor is being pulled.

Common recommendations for how much scope to let out are as follows:

5:1 for mild to moderate winds

7:1 for moderate to strong winds or frequent direction changes

10+:1 for very strong winds and/or current

How to anchor a boat

Successfully setting an anchor has a lot to do with communication between the person steering and the person deploying the anchor at the bow. Because of the noise of the engine and wind, we use a system of hand signals to communicate as we set the anchor. Some crews like to use walkie-talkies. Our anchoring system for setting a boat anchor is:

Of course if you plan on sailing onto your anchor (not using a motor) there are a few extra steps.

How to anchor a boat in various conditions

Learning how to anchor a boat in swell can be challenging if the wind is coming from another direction.  Depending on the conditions we use two techniques for anchoring in swell.  Primarily we set a stern anchor to keep our bow pointed roughly 15 degrees off the swell; as we have found this to be the most comfortable position.  Sometimes in less challenging conditions we will set a winch bridle. 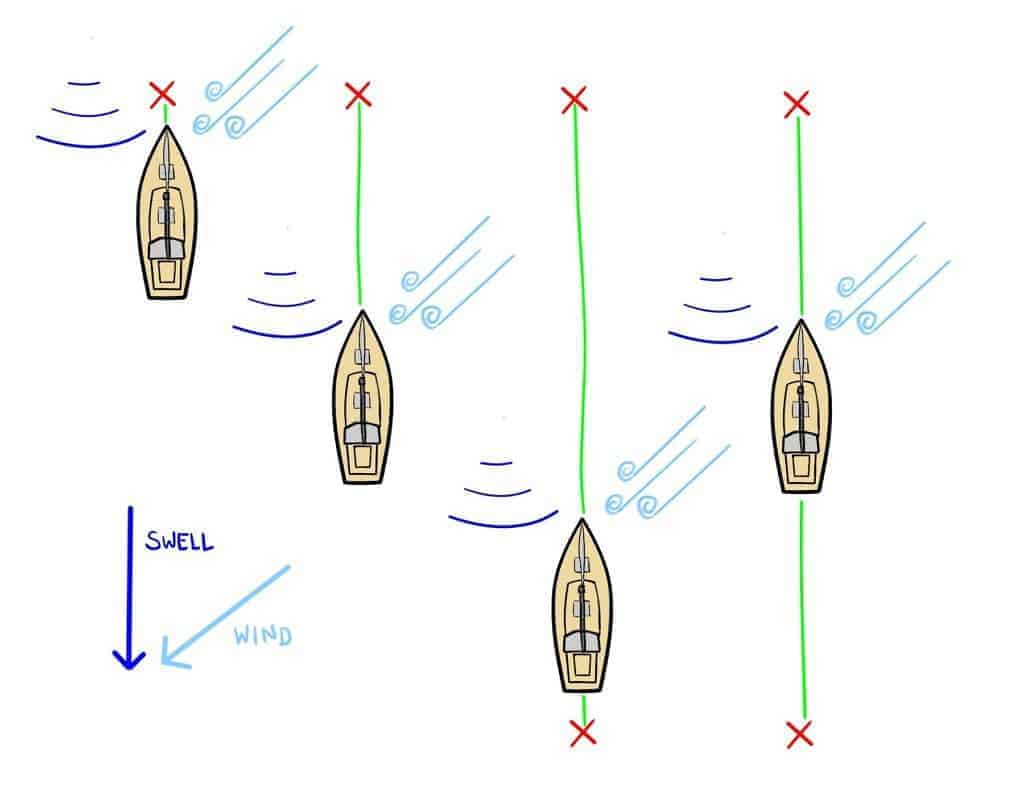 An alternative is to take the stern anchor in the dinghy to where out 5:1 scope and then winch it taut. 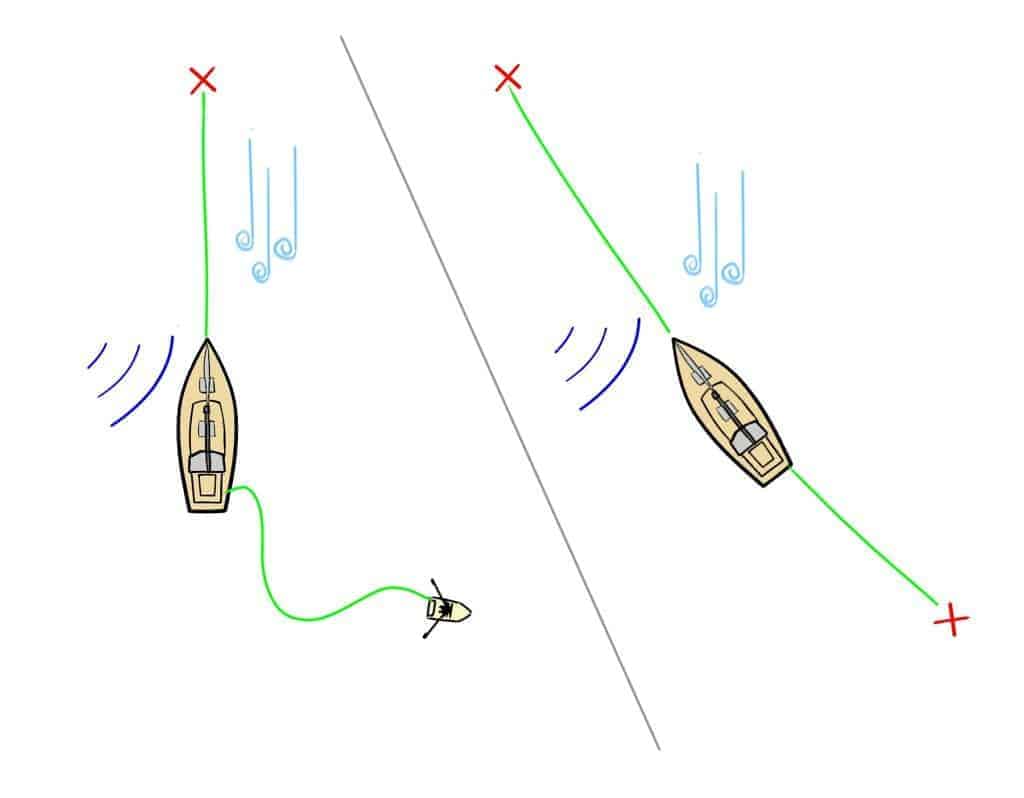 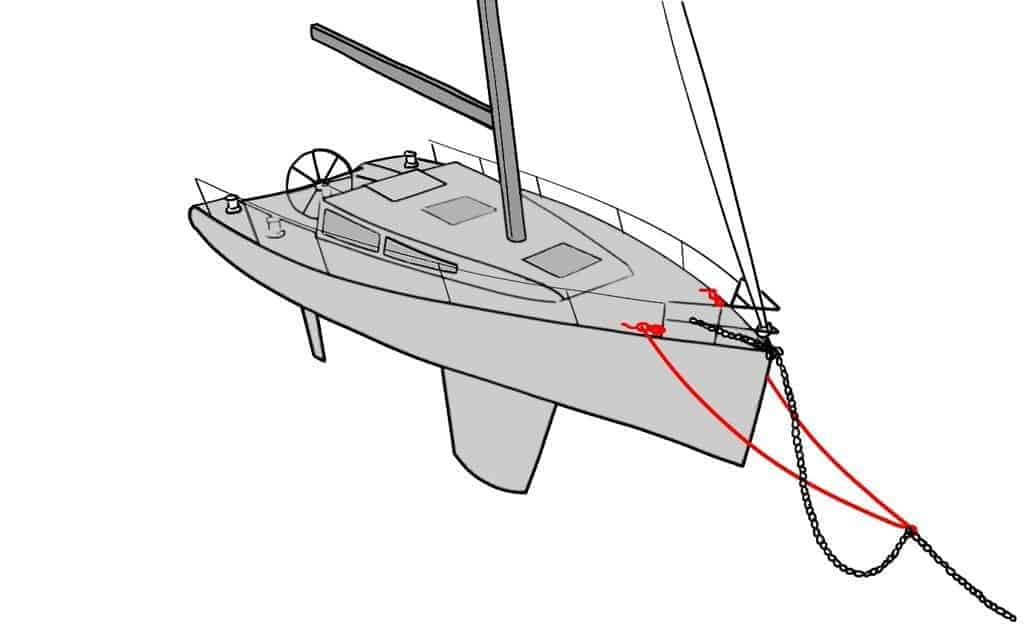 Another option for anchoring in swell is to set up a winch bridle.  This is accomplished by fixing a line onto the rode, using a rolling hitch, and bringing that line back to a cockpit winch.  By winching in on the line, it creates a bridle that is no longer directly off the bow of the boat.  This option works if the wind direction is constant, though the winch line can be adjusted as the wind shifts to keep the bow in a comfortable direction. 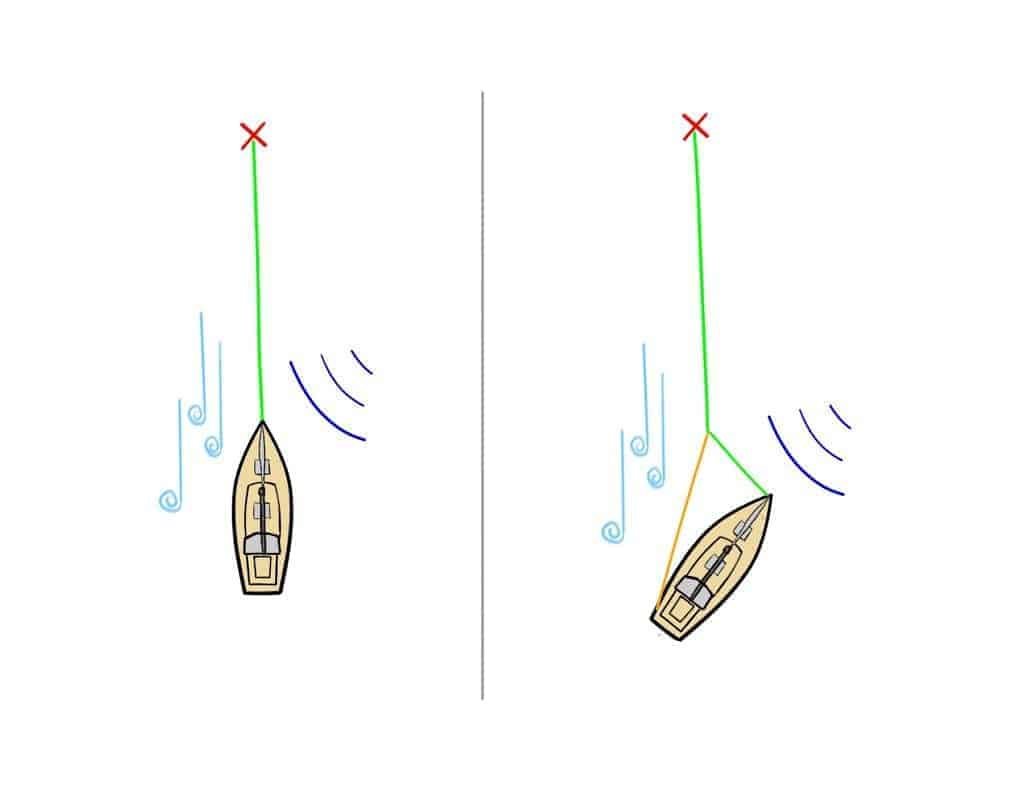 In areas where the wind is shifting a lot you may want to set two bow anchors.  Two anchors are set to windward approximately 22-30 degrees to either side of the bow.  Setting two bow anchors is similar to setting a stern anchor, except that after setting the first anchor instead of backing up you motor upwind at a 45-60 degree angle.  When you are even with the first anchor, drop the second anchor and fall back between the two, adjusting the rodes as necessary. 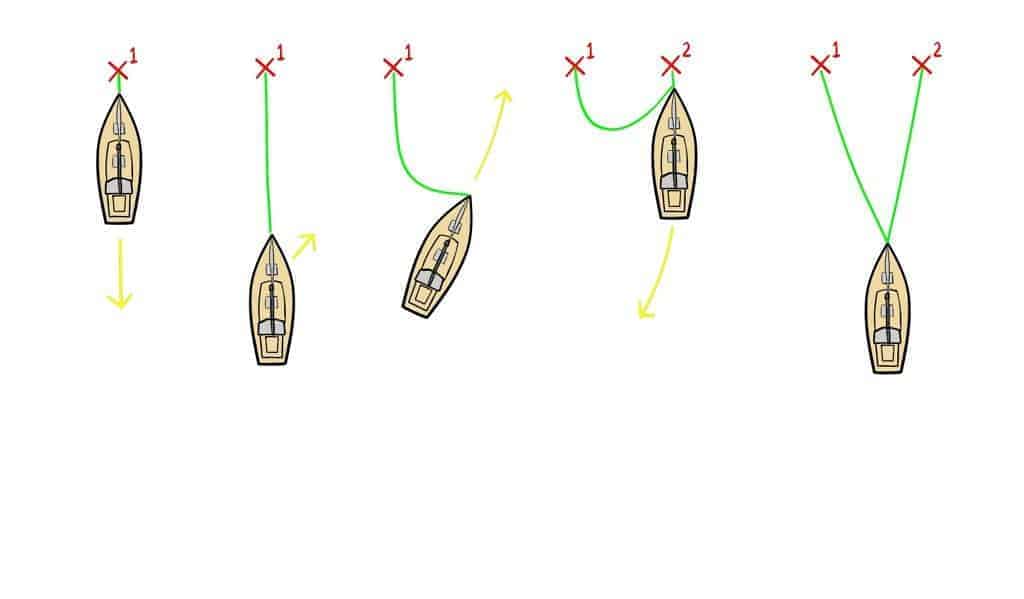 In areas that experience fast currents and 180 degree shifts, a common anchoring technique is called the Bahamian moor.  This is more common on the east coast, but is also useful in the river bar anchorages frequent along the California, Washington and Oregon coastlines.  It is the same technique as setting the stern anchor, except that instead of fixing the second anchor to a clean at the stern, both anchors are run off the bow.

Sometimes wind and current will work against each other, causing no end of concern.   In such conditions, boats, especially modern hull designs with fin keels, can move around the anchorage almost at random as they are influenced alternatively by the wind and current.  In such a scenario, turning the wheel hard over to one side and locking it usually keeps the boat in a relatively stable position.  It is same principle as heaving-to; the forward motion of the boat causes it to turn thereby changing the wind angle and dissipating the force.

The three simple rules of anchoring etiquette, which will also increase safety in the anchorage, are:

In the unlikely and unfortunate event that the anchor drags there are a number of alarms that will let you know.  Some GPS chartplotters have built-in anchor alarms, drift alarms or depth alarms.  These are handy, but the GPS is often in the cockpit and unless you have a receiver, you may not hear it from the V-berth.  Another option is to download an anchor watch alarm app. Apps often have more functions than the GPS alarm and we can keep the Ipad near us at all times. 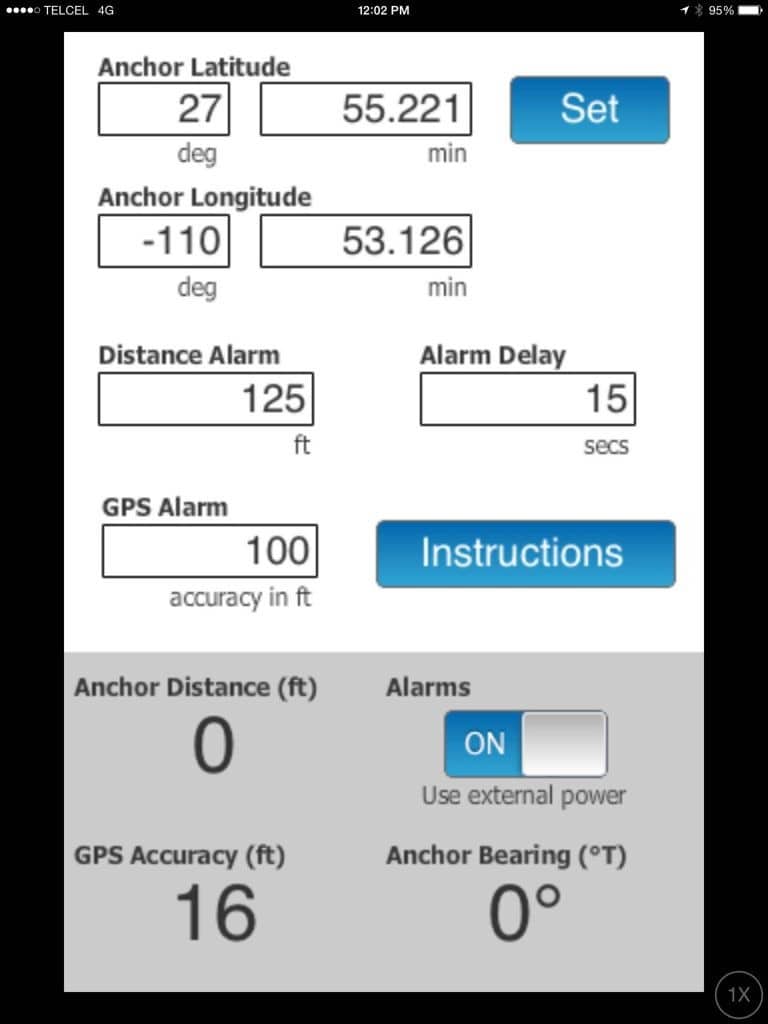 Set it and forget it

Whether you are headed out for the day, weekend or season, the basic techniques for anchoring do not change much. The vast majority of the time you will be relying on only one or two of the techniques outlined above. Anchoring is an individualistic activity and everybody has their own personal preferences that have been refined over time. But at its heart anchoring is pretty routine and doesn’t have to be overly complicated.

So now that you know how to anchor a boat it’s time to set the anchor, grab a drink and enjoy life on the hook!

Interesting that you fail to mention anchor bearings taken with a hand bearing compass. These are not totally fool proof, but they are a low tech method of checking your anchored position. Three bearings taken at approximately 120 degree angles on objects that should be visible at night and you are set. Check them periodically to insure you are in the same position. Chapman's has a nice section describing how to do them.

Just because it is old and low tech does not mean that it is worth ignoring.

We enter them in the log as well as when we hoist, or turn on, the anchor light in the event there may be a legal question about these things.

You also fail to mention getting up at regular intervals to look things over.....many unforeseen problems occur that are not even on your boat, such as another boat coming in and anchoring on top of you after you go to sleep.

I like and use the electronic anchor alarms, but I won't bet my life on them.

Such excellently points. Thank you Jim. I'm looking forward to trying your hand-bearing compass suggestion. Thanks so much for sharing.

Great information Robin. Don't forget to include Mantus anchors in your consideration. They are awesome and excel in most anchor tests.

I would love some ideas for anchoring on Rivers with current and wind. If using rope road you can get lazy anchor syndrome. That's when wind can over come current, your boat drifts lazy on the water and eventually your rode wraps around your keel. Not fun!! Aside from a stern anchors, chain or a Kellett I am at wits end, LOL!!

Thanks Mark, you're right, Mantus are great anchors. We know lots of boats sporting them. One of the best features is being able to break them down to flat for storage and transport. We included Mantus in the chart in the article and in the mention of new generation anchors. As for anchoring in rivers with a lot of wind we don't have a lot of experience, but we've heard a lot of people like the Bahamian moor. I actually originally included a diagram in the article but removed it for brevity's sake. I'll add it back in again and republish, but there is a lot of good information on how to set up a Bahamian moor. Sometimes difficult to set, but overall works very well in rivers with shifting currents. Thanks for the feedback and suggestions.