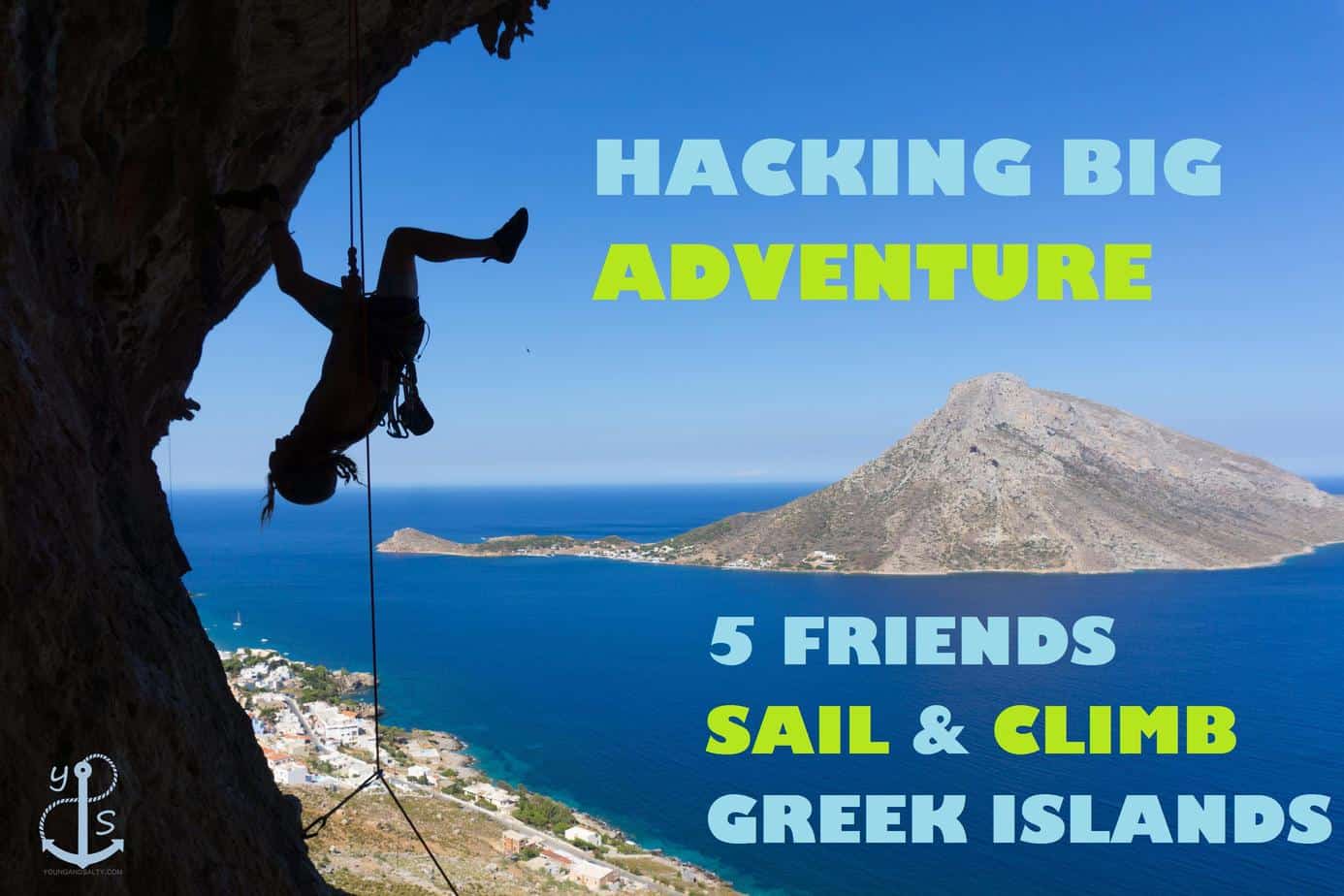 I called Ian Drogin on Skype to interview him about his recent expedition: a 6-week sailing and climbing adventure throughout the Aegean Sea where he and his crew tackled several limestone crags in the Greek Islands. I was half-expecting to meet some burly hybrid sea-dog/mountain-man. After all, the trip sounded like the kind of thing you do with years of sailing experience, a few seasons of dirtbagging in Yosemite’s Camp Four, and a vegan energy-bar sponsorship.

I reached Ian (28) in a Santa Cruz Starbucks, which was for that afternoon serving as HQ for his online cell phone accessories business. Dressed in a casual charcoal button down with a mop of sandy sun-streaked hair, he typified the millennial entrepreneur – one foot in the office, one foot in the surf.

As Ian described their trip preparations I was surprised to learn that he and his crew had scant sailing experience (though Ian had co-owned a 22 foot Catalina for two years in San Francisco Bay). “None of us had climbing experience either,” Ian laughed, “We all sat down around kitchen table and figured out the sailing courses we needed to charter a sail boat.” The team, which included Ian’s brother,Tyler Drogin (27), as well as Anna Adamski (22), Spencer Montgomery (27), and Aaron Adamski (27), set out researching sailing courses, chartering a boat, hiring a climbing guide, and assembling gear. Four months later they were loading provisions onto Hellenic Sky, the Bavaria 44 that would serve as base-camp for their 6-week mission. 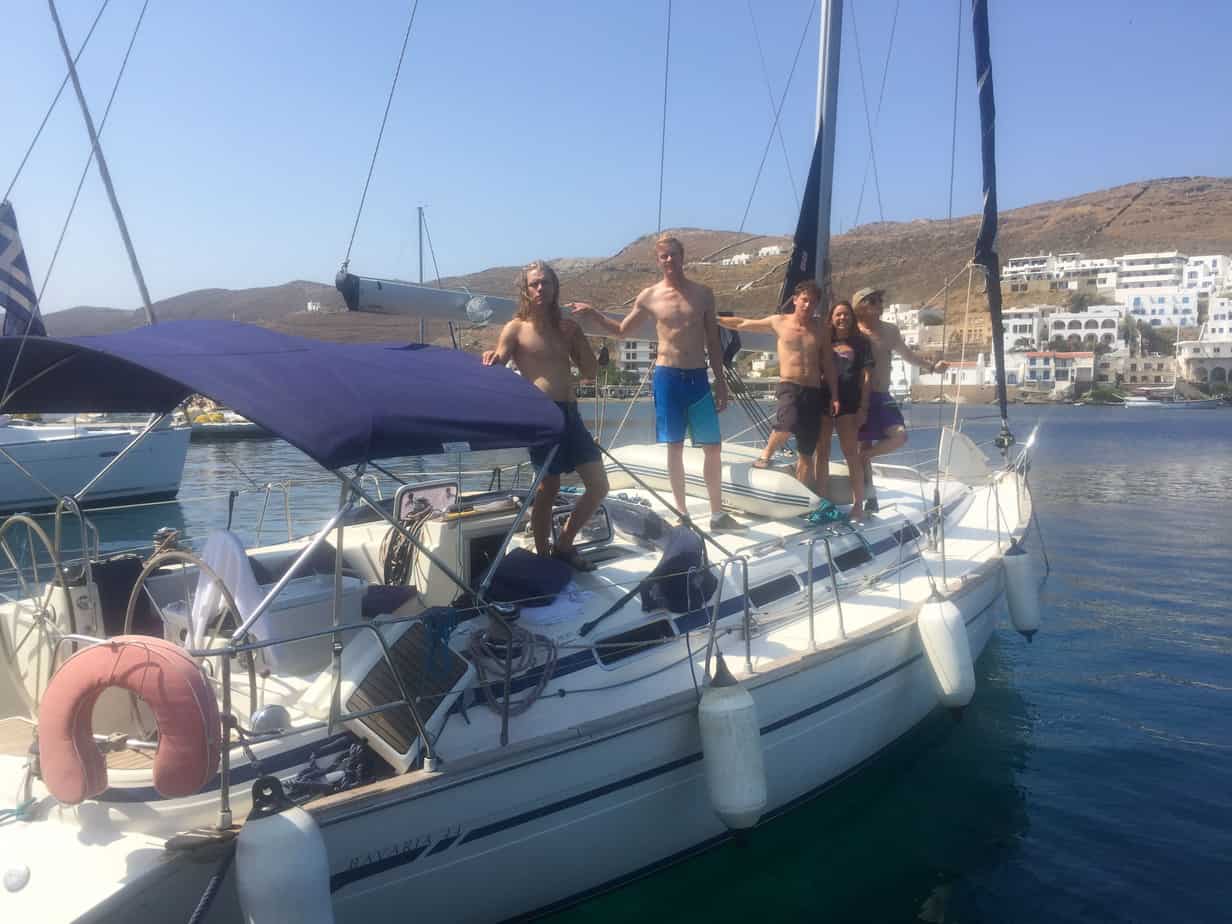 “It’s the feeling that you can do what ever you want. You have this boundless freedom to go from one island to the other. Islands have a feeling of limitlessness.”

While you can learn a lot from basic sailing courses and YouTube, I had troubling imagining how they’d prepared themselves for managing the morass of systems on a 42-foot boat not to mention sailing it in a region where none of them spoke the local language. There are so many things to know: how to run the engine, how to generate and manage electricity, where to find a reliable source of weather information, where to obtain water and fuel, learning about the cruising grounds – logistical requirements that a cruiser might spend years preparing for.

It turned out that they had a clever hack to circumvent these problems: they hired a local expert to get them up to speed. Fiori, was a captain with the charter company, Sail Ways, and accompanied them for the first few days of cruising. After that he was available by phone to answer questions about the boat, advise on passage planning, provide local knowledge, send weather updates, and translate. The ultimate cruising concierge service. The crew employed a similar strategy when it came to climbing: hiring local experts to get them started and then setting off on their own. 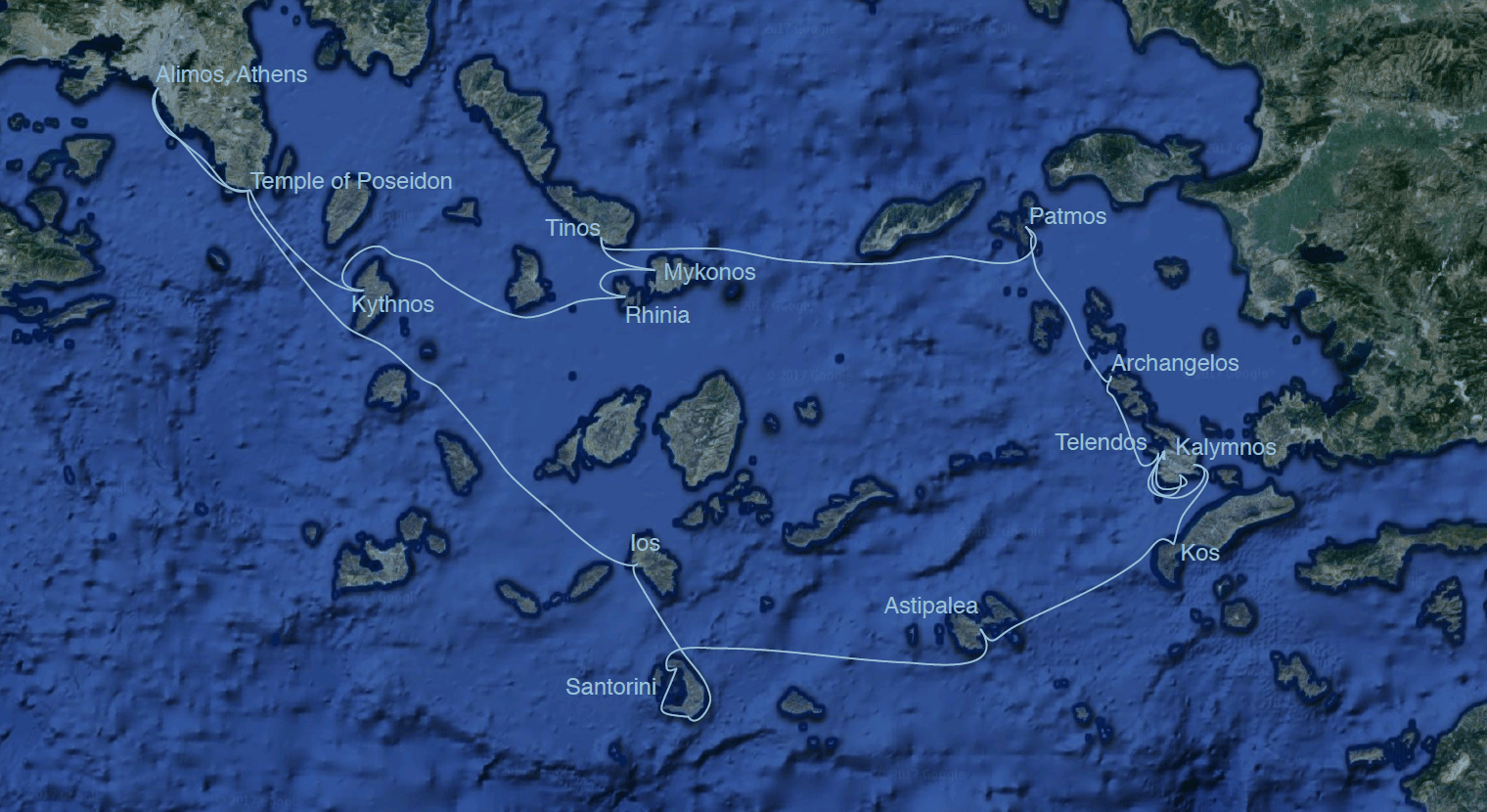 The plan for the 6-week sailing and climbing expedition was to visit 15 islands. Their days began to unfold in a steady rhythm of sailing and climbing. They spent their land-days scoping out routes, climbing, and riding their scooters to the local eateries to refuel on fresh fish, zucchini fritters, and tzatziki. This would sometimes be followed by cross-training: a beach bar dance party or a midnight swim. Sailing-days were more mellow, “We’d getting up around dawn, make a quick breakfast and get on the water. We’d hang out on the boat and talk, play guitar, do our little art projects.”

“I think a lot of people have this idea of sailing being a luxury sport for the rich – but the way we did it seemed very financially manageable.” 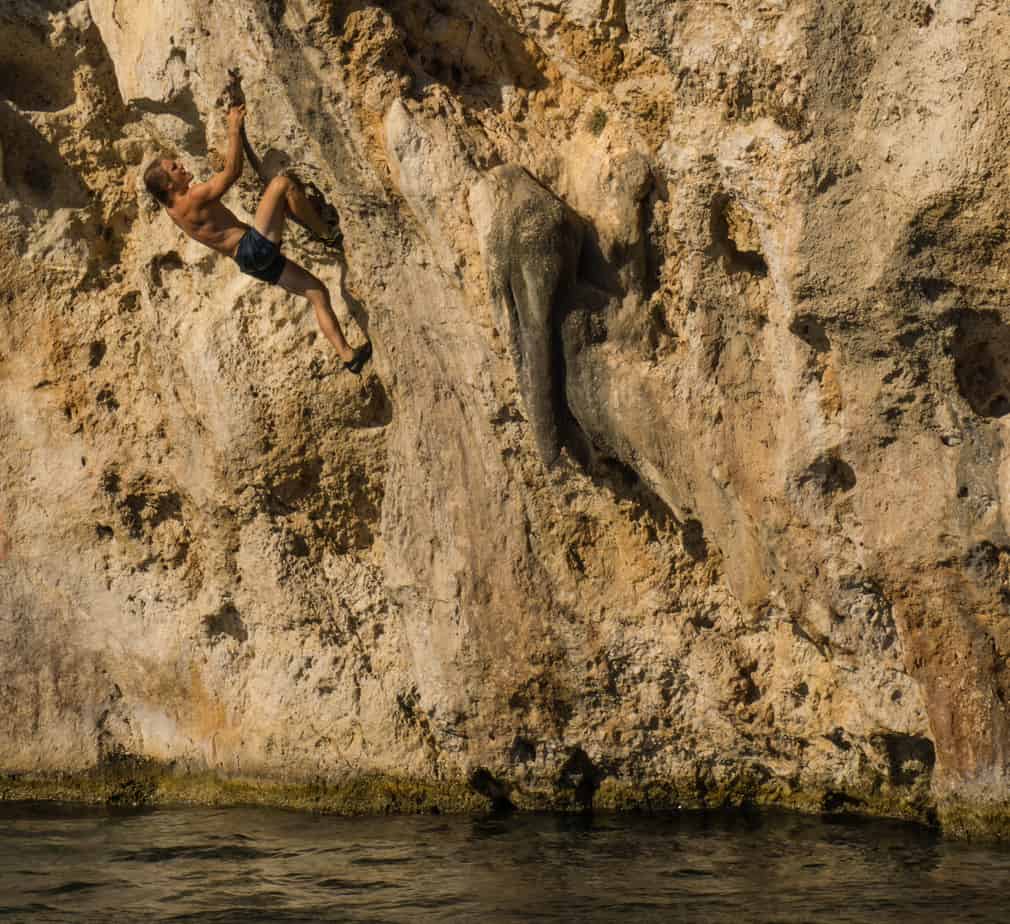 Of course, the universal laws of cruising still applied, and things on the boat inevitably broke. “I probably can’t communicate what our day was like without adding that there was always something that would come up that we didn’t readily have a solution for.  Like our engine or water tank would stop working.” Though at times frustrated they were never defeated, “We’d have to go find someone to help us, read, look online, or problem solve amongst ourselves. That was probably a daily occurrence.”

In one instance, they lost their engine and with no wind, were left bobbing off the coast of Kalymnos. “We got on a video call with Fiori, our original captain. When we couldn’t trouble shoot the engine they organized a tow and got a mechanic out there. It alleviated the burden of looking online and finding a mechanic in a language we didn’t know, in a place we didn’t know.”

There was of course the challenge of the sailing itself.  They set out early one morning on a sail from Tinos to Patmos. “Often before a crossing we’d call and consult with Fiori. What do you think of the weather forecast? How is the holding in this anchorage?” They were eager to move on and climb, but this day Fiori told them not to go due to bad sea conditions. They decided to push on anyways. As they rounded Tinos the conditions deteriorated. “We were slammed by 8 foot waves, got sea sick, puked. All of us miserably sea sick.”

Despite the obstacles, there was always a sense of excitement and possibility that kept everyone going. “It’s the feeling that you can do what ever you want. You have this boundless freedom to go from one island to the other. Islands have a feeling of limitlessness.” 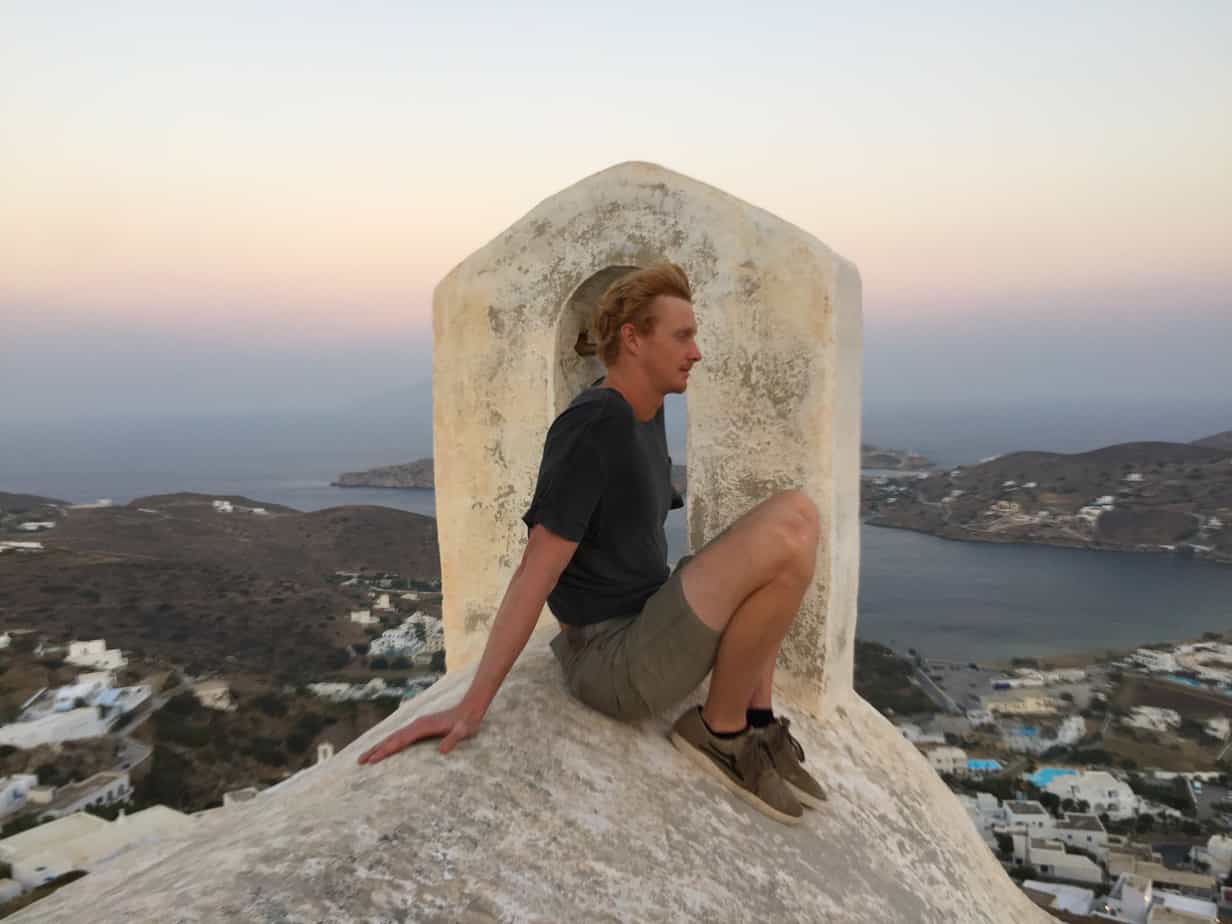 “Adventures are not as hard as you think. They’re actually pretty accessible.”

I began to do some mental math. The cost of a 6-week charter, private captain, climbing guides, bottomless tzatziki…. it’s all got to add up. What did it cost them? “We spent $8,000 US total ($1,600 per crew member) on the charter. We got better rates because of how long we chartered for. The way we viewed it is that it was all our rent and transportation expense for a month and a half.” Ian’s strategy of using a charter boat as a platform for a climbing adventure, seemed to me, another clever hack. Whereas equipping your own vessel for an equivalent trip might take tens of thousands of dollars and months of preparation, this seemed like a much more expedient option.

Ian told me that including everything, the trip worked out to between $2,500-4,000 per person – depending on how much each person ate out. “We had a kitchen to cook in, we didn’t have to worry about transportation. Climbing is free. I think a lot of people have this idea of sailing being a luxury sport for the rich – but the way we did it seemed very financially manageable.”

After the trip, Ian returned to Santa Cruz determined to make these kinds of adventures a yearly occurrence. “Right now, we’re all kind of settled and working on other parts of our lives: school, work, and what we call our adventure skills, like surfing and climbing.” As Ian waxed lyrical on future trips including a scooter-surfing trip in Bali and a sailing/climbing adventure through the fjords of Norway, I must have looked somewhat quizzical. “Adventures are not as hard as you think,” he reassured me, “They’re actually pretty accessible.”

To read more about Ian and the crew’s adventure check out www.windandrock.com. 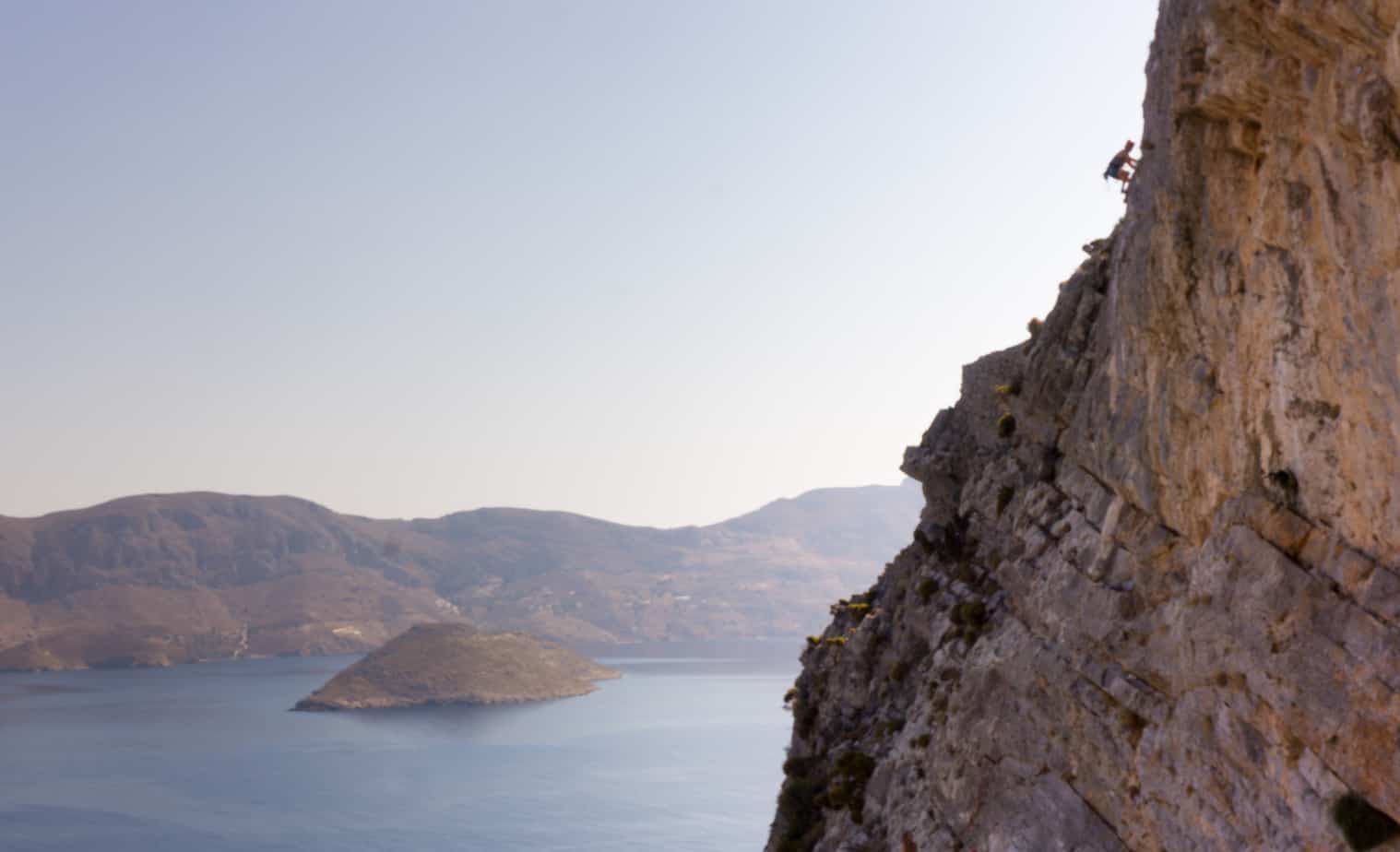 If you enjoyed this story, you might also like James Baldwin’s sailing and climbing Oddyssey, “Across Islands and Oceans”, available on audiobook at Good Old Boat’s Audio Sea Stories store.

Are you familiar with Rev. Bob Shepton of the UK and his frequent voyages with "The Wild Bunch"? Bob is a legend of the sailing world, the climbing world, and the Arctic world - he's in his 80s and still leading sail-to-climb voyages to Greenland in the style of Bill Tilman and the s/v Mischief voyages. "The Wild Bunch" are his crew of young, Patagonia-sponsored climbers-turned-sailors - wonderful energy and incredible adventures - their videos Vertical Sailing Greenland are really worth seeing!

Those guys are wild! So cool to see more climbers getting into sailg and vice versa.

Kimberly (Australia) Rock Art Video.... Here's a look at some rock climbing in Australia to visit ancient rock paintings by a cruising crew. The lead is a bit old and salty, but his companions are of the slightly younger variety. Getting to interesting places, like this by sail and small craft lets cruisers visit locations otherwise unavailable.

Thanks for the great recommendation!