I’d grown up the stories of the first Golden Globe, a race so arduous that one in nine boats finished. Robin Knox-Johnston became the first person to sail around the world solo non-stop (it took him 312 days). But the stories of the skippers who didn’t finish, nearly eclipsed that of the one man who did. French sailor, Bernard Moitessier was on cusp of winning the prize for fastest time when he mysteriously quit the race to “save [his] soul” and continued on a near second circumnavigation. British amateur, Donald Crowhurst, went to sea in an unsound boat and, upon realizing he wouldn’t survive, sent out strange (and false) position reports. As the world prepared a winner’s welcome, the news broke that he would not be returning. Realizing his deception would be uncovered, he’d committed suicide.

To mark the 50th anniversary of the original Golden Globe, 16 sailors (at the time of writing) are racing around the world, solo non-stop, using only technology that would have existed on Robin Knox-Johnston’s boat in 1968. Meaning no GPS, AIS, radar, satellite phones, modern weather products or routing. Even digital cameras are prohibited, meaning it’s back to the days of 35mm film.

While covering the start of the Golden Globe 2018 sailing race in France, I heard a woman describe the competitors as “romanesque”. At first I thought she meant “romantic” but she explained that “romanesque” means to be like a character in a novel. The 2018 Golden Globe racers are certainly as “romanesque” as the likes of Knox-Johnston, Moitessier, and Crowhurst. They include both professional sailors and amateurs: a mountaineer, foreign exchange-trade, an oceanographic surveyor…Also, perhaps a testament to just how important the original Golden Globe is to sailing history, of the 16 competitors that remain in the race, 6 of them are under 50. Meaning, the 1968 Golden Globe happened years before they were born. 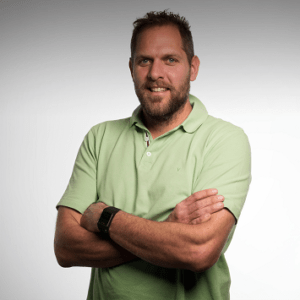 Mark Slats  rowed across the Atlantic earlier this year and set a new speed record. He averaged 17.5 hours of rowing a day, slept in 20-minute increments, and capsized over 30 times. Slats has also circumnavigated by sailboat. One day I found him walking on the docks with a large rowing oar. I joked, “You going to row your way around the world with that, Mark!?” To my surprise, he nodded and explained that his plan was to row his Rustler 36 when there was no wind and that he can average 2 knots an hour. Incredibly, he’s done it. In the first week of the race he pulled ahead, rowing while everyone else bobbed in light air. 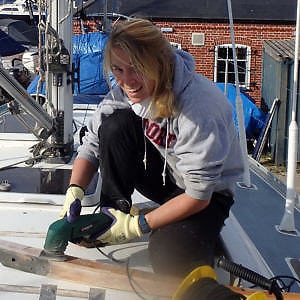 Goodall is the youngest and only female competitor. She’s also tired of people asking why she wants to sail solo non-stop around the world using 1960’s equipment. “Why not?” she recently told Forbes Magazine. Goodall is an accomplished sailor and offshore sailing instructor. She loves high latitude sailing and is partial to fruit cakes. Her dad baked her 24 fruit cakes for her journey, which works out to a slice a day for 250-days. 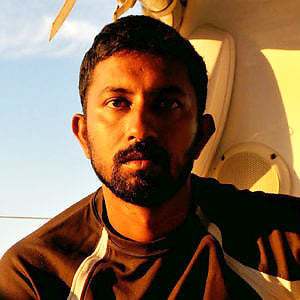 Commander Tomy, of the Indian Navy, comes to this race having already circumnavigated solo non-stop from Mumbai in 2012/2013. His boat, Thuriya, is a custom-built replica of Sir Robin Knox-Johnston’s iconic Suhaili.

I first met Tomy after a 3-day warm-up race across the English Channel (the busiest waterway in the world). The competitors arrived in France sleep-deprived, having had to keep a careful watch for ships in the night. Tomy however seemed to be brimming with energy. “Aren’t you tired?” I asked. Apparently not. He’d slept well every night (despite having no crew). He told me he found the traffic very organized compared to India. There, he told me, no one follows the rules and the vessels often don’t have navigation lights. For Tomy, the English Channel was a breeze. 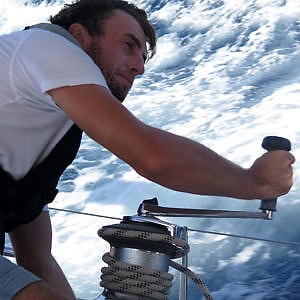 Having worked as a  delivery skipper McGuckin has logged over 45,000 sea miles and is deeply concerned with the state of the world’s oceans. He’s using his Golden Globe sail to raise awareness, having organized a environmental program for Irish school children. His goal:  to create an army of ‘Ocean literate’ young people.

I also learned that McGuckin was carrying a giant barrel of whisky aboard. He plans to bottle and sell it once he’s been all the way round. 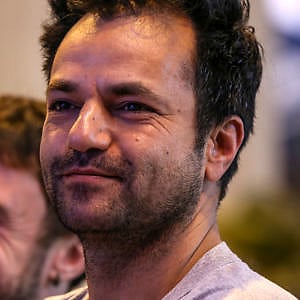 Amra is an American-Palestinian foreign exchange trader from Chicago. When he read about the GGR 2018 in a magazine over his lunch break, he immediately walked back to the office and submitted his entry fee (despite having little ocean sailing experience). “I’m preparing to start a new chapter in my life that has more to do with adventure,” he explained, “The Golden Globe Race came along at just the right time to turn an incessant daydream into reality.” 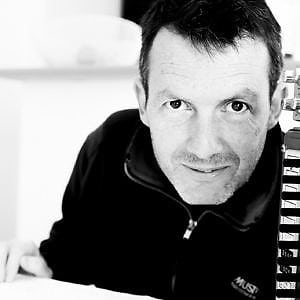 Cousot is a professional mariner and has done the equivalent of 3 circumnavigations, including 15 ocean crossings. He, like many of the skippers, has made considerable sacrifices to enter the Golden Globe 2018,” I have had to give up an international career, a comfortable living and sell my house and boat.” So why do it?  “It is a unique opportunity to take this relationship with the sea even further. It is a challenge to accomplish what few sailors have done before; it is a quest with cosmic dimensions.”

You can read more about the competitors and track their progress on the Golden Globe website.