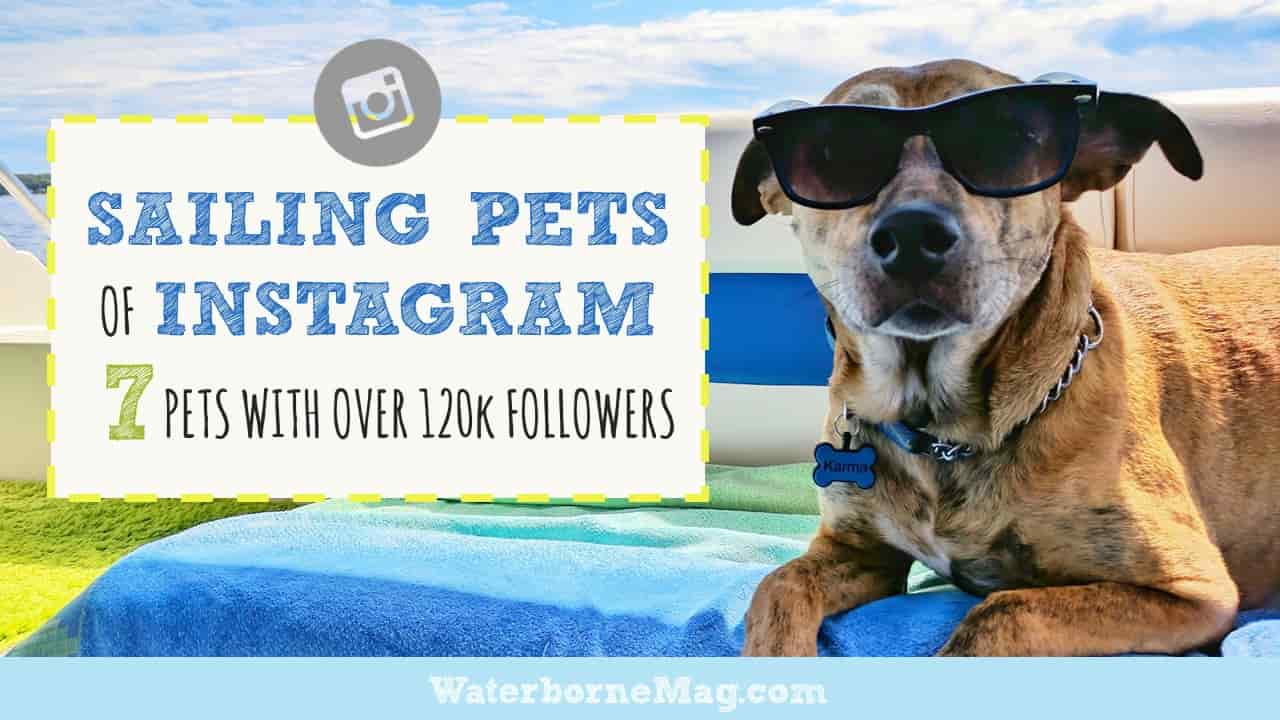 For as long as humans have been going to sea, they’ve been bringing their furry companions with them. Parrots, cats, and dogs have long been valued crew members.

For example, Captain Cook had dogs and cats aboard HMS Endeavour in 1768. They were even subject to the equator line crossing ceremony along with the rest of the crew.

Joshua Slocum, who sailed around the world solo from 1893 to 1894, was gifted a goat in Jamestown by a friend who suggested that the goat would be as “companionable as a dog.” The goat proceeded wreak havoc aboard Spray, eating a chart of the West Indies and Slocum’s straw hat before being disembarked at the next port.

Today, sailors continue to bring their pets to sea, and some of these seafaring pets have their own followings on social media. Here are 7 sailing pets with a presence on Instagram. Combined they have over 120K followers!

Jack the poodle sails the Caribbean aboard Angelsea with his humans Deb and Gary. He sails, snorkels and lets his fabulous golden locks blow in the breeze.

Salty the cat lives aboard a Bruce Roberts sailboat in Scotland, along with a Springer Spaniel and a Goldfish.

Monique the chicken has spent the last 5 years sailing around the world with 26-year old Guirec Soudée, The two have had plenty of adventures together: becoming trapped in Arctic ice for 130 days, surviving 15 m waves, and being briefly imprisoned by the Canadian coastguard. Soudée recently became the youngest person to navigate the Northwest passage solo. Meanwhile, Monique is making waves with her first book!

🇫🇷Depuis la sortie de nos 2 livres mercredi dernier nous sommes inondés de messages positifs, mille mercis à vous tous🙏🏽 ! On est tellement heureux d’avoir pu retranscrire en détail toute notre aventure, hâte que vous la lisiez 📖 Pour la commander le lien est dans la bio 🔝 . . 🇺🇸 We received so much positive and kind messages from all of you guys, thank you so much 🙏🏽 ! We are so happy to have been able to transcribe in detail all our adventure, look forward to you reading it 📖 To order it, the link is in the bio 🔝

Shackleton is helping two architects renovate and outfit a 100-man survival lifeboat into a self-sufficient home. Their plan: to make a 3500km voyage to Arctic Norway.

Peanut the boat cat claims he was adopted under false pretenses but judging by his feed he seems to be enjoying the sailing life aboard his Valiant 42.

New marina, who dis? 😹 We are at Downtown Hampton Public Piers and I have already gone for a walk and “met” a doggo. I wasn’t impressed 😼 #boatkitty #boatcat #boatpet #turkishvanmix #adventurecat

Meet LeeLoo and Atti, aboard SV Avalon. Unlike their pirate parrot ancestors, these two seem more interested in playing dress-up than pillaging and marauding.

Bambi is canine crew aboard SV Alvor. This sweet rescue pup is now living the dream with beach days and boat life.

After so long in Albufeira it feels great to be back out on the water and have that sea air blowing in your face. Cádiz here we come!

This is new… I’m not used to getting my own pillow in the cockpit but I like it! #sailinglife #boatdog #dogswhosail #dogsofinstagram

Tips for conserving water on a boat

Why sailing is fun (even when it isn’t)

The 30hp marinized Kubota engine on our 1979 Dufour 35 had always run a bit hot.  The previous owner

What makes a bluewater boat?

The SECRET to removing a rusted screw