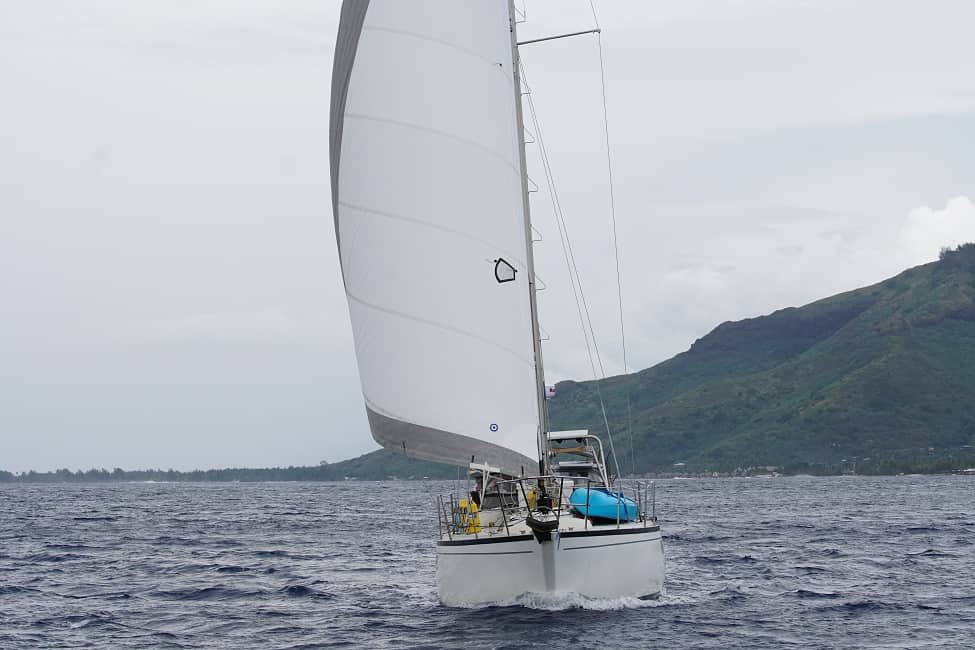 WHAT ARE THE ESSENTIAL FEATURES OF A BLUEWATER SAILBOAT?

One of the oldest debates in the sailing community surrounds the essential features of a bluewater boat. After buying a boat and crossing the Pacific we began to seriously question our definition of a bluewater sailboat and surveyed 56 boats that crossed the Pacific in 2016-2017 to find out what they had, what they didn’t, and whether it made a difference in their passage.

Note: This post was adapted from my April 2018 article in Ocean Navigator

6 CHARACTERISTICS OF A BLUEWATER YACHT

The traditional consensus seems to be that the “bluewaterness” of an offshore yacht boils down to six main elements. A full discussion on each feature is included below. According to many, the best bluewater sailboats have:

This legitimacy of this list was bolstered by John Neal’s Boats to Consider for Offshore Cruising.  We paid attention because John Neal has sailed over 350 000 miles (including six Cape Horn roundings) and is considered a leading expert in offshore sailboat preparation.

When we set ourselves the goal of bluewater cruising from Vancouver to Australia, we asked as many people as we could about what we should be looking for in a good ocean-going boat. As we looked around for a suitable sailboat we were dismayed to find that very few had all the characteristics we were recommended and almost none in our price range. The ones that did felt so old and clunky that we couldn’t imagine enjoying sailing them. As one enthusiastic seller said to us, “Takes her 20 knots of wind to start moving, but when she does, she’s a freight-train.” See this post for the best places to find bluewater boats for sale.

A MATTER OF COMPROMISE

We began to ask questions, “Do we really need a full keel?” “Can we get by with a spade rudder?”  In the end we compromised. We went with a boat that met some of the requirements, but not all.

We settled on a Dufour 35, built in 1979. It had a solid fibreglass hull and skeg-hung rudder, but was billed as a racer-cruiser when it came off the assembly line. As such, the tankage was minimal, she doesn’t have a fin keel and isn’t a cutter. She also has a balsa-core deck to save on weight. We were emboldened by the report that many others had sailed around the world in this model of boat and she did appear in John Neal’s list of acceptable offshore boats, although without glowing remarks.

We were never fully confident in our little Dufour as an offshore sailer until we got to the Marquesas. It wasn’t only that she got us there in one piece, but more that upon arriving we saw boats of all ranges and shapes. We saw new Beneteaus and Jeaneaus and even Hunters; all light displacement, fin keel, spade rudder, no bilge, fractional rigged sloops. “What’s going on?” I asked myself, “How did all these non-offshore boats get here?” 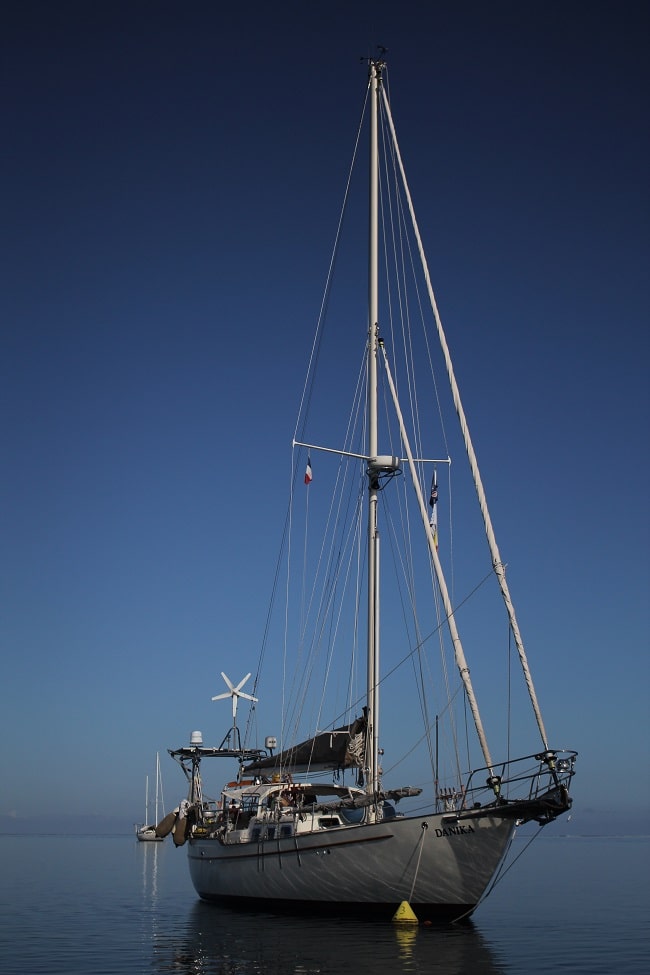 Intrigued by this surprising revelation I decided to learn more about what kind of boats cross the ocean. I gathered data from 56 boats that crossed the Pacific between 2016-2017 and researched their features to see how many checked the boxes on the bluewater list. The results called into question the traditional definition of a bluewater sailboat and reflect advances in weather forecasting and navigation. A full list of the boats is provided below. 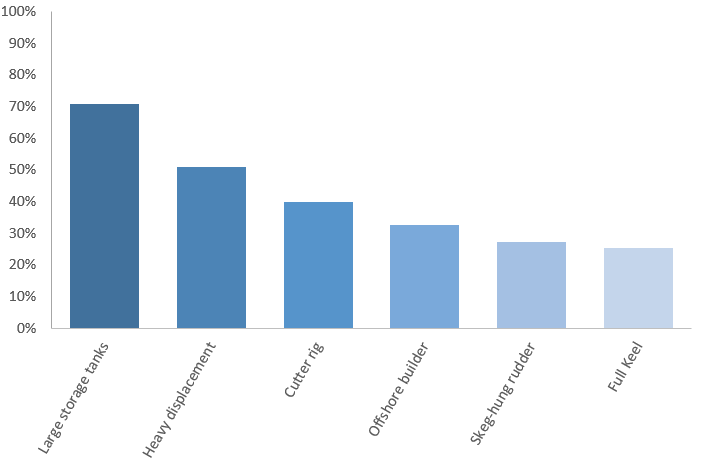 Of the 56 boats examined in this study 9 (16%) met all the above criteria for a bluewater cruiser. On average the boats met less than half (41%) of the criteria. The two most often met criteria were large storage capacity and heavy displacement, which are usually linked.  Cutter rigs were popular designs, while ketches were few and far between.  A full discussion of each feature is included below.

The most common rig type turned out to be a cutter rig (40%), followed by fractional sloop rigs (27%) and closely thereafter by masthead sloops (26%).  The more modern designed, light-displacement boats usually feature fractional rigs.  Ketches (7%) filled out the rest of the fleet. 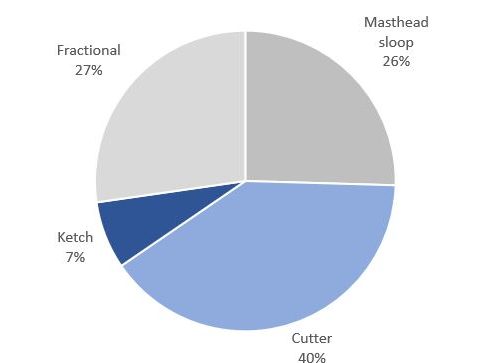 The main advantage of a cutter rig is the ability to fly a stay sail or storm jib from the inner forestay, which provides more options for both light wind and heavy weather.  Keeping the centre of effort close to the centre of the boat is more efficient and more comfortable in heavy weather. The secondary advantage of a cutter is having a backup forestay already installed should the main forestay fail.  Owners of masthead sloops often install Solent stays to provide some of the same benefits of a cutter.  We did this, but in the end it only gets in the way and we never use it.

The main advantage of a fractional sloop is easier sailing handling. The jib is smaller on a fractional rig than a masthead rig and makes gybing and tacking easier. Also the spinnakers tend to be smaller on fractional rigs and easier to fly for most cruising couples or shorthanded crews. As wind speeds pick up the main is reefed while the can jib remain full up to certain wind speeds. This makes reefing easier and improves efficiency as reefed headsails have notoriously poor shape and move away from the centre of effort as they are reefed.

For the purposes of my survey, keel shapes weren’t defined beyond long keel or fin keel. I grouped cutaway forefoot and full keels under long keels, and winged keels or bulbed keels under fin keels. Only a quarter of the boats had long keels.  As seen with the fractional rigs, modern designs overwhelmingly use a fin keel to provide lateral resistance.  Over 13% of the boats were catamarans and don’t really fit into either category. 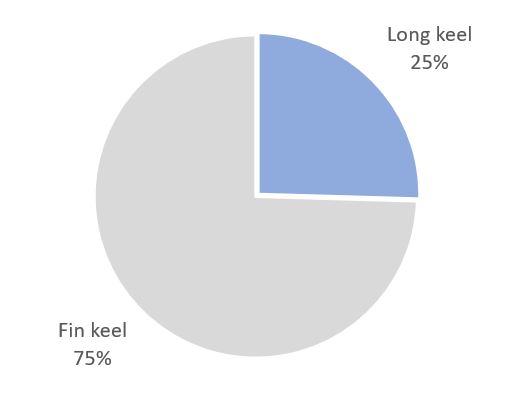 A long keel has many advantages and many detractors. 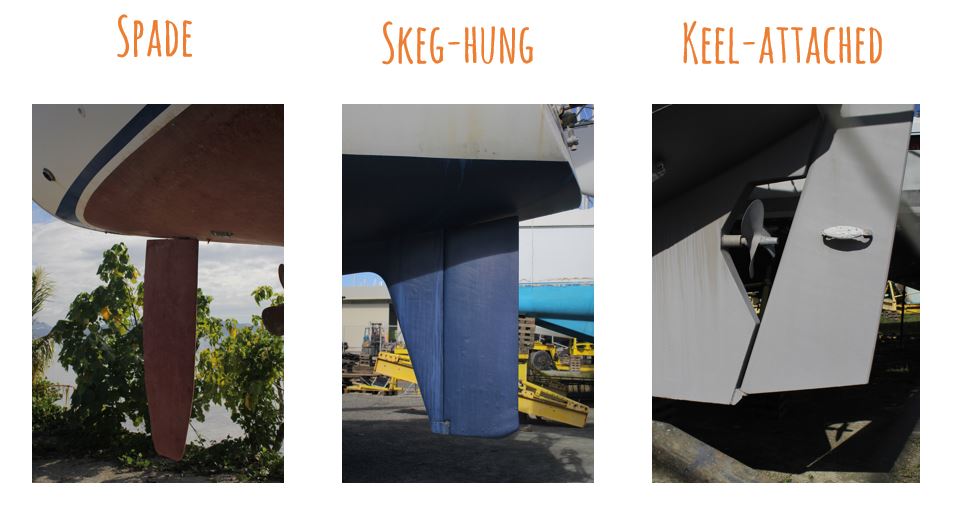 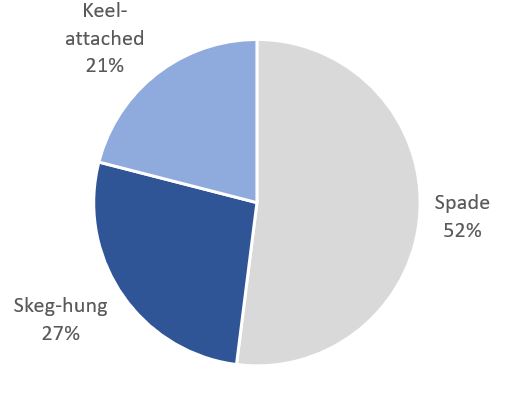 Skeg-hung and attached rudders have an obvious advantage in that they are protected from direct impact. The pressure on the leading edge of the rudder is also greatly reduced, putting less strain on the rudder post.  An added advantage is that fishing lines and other marine debris can’t get caught in between the rudder and the hull. As with a full keel the main detractor is diminished sailing performance.

A spade rudder acts like a wing under water. It’s ability to cant with the turn, and fine leading edge make it much more efficient than a skeg-hung rudder. The rudder design makes the boat more responsive to changes in course as well as enhancing overall speed. 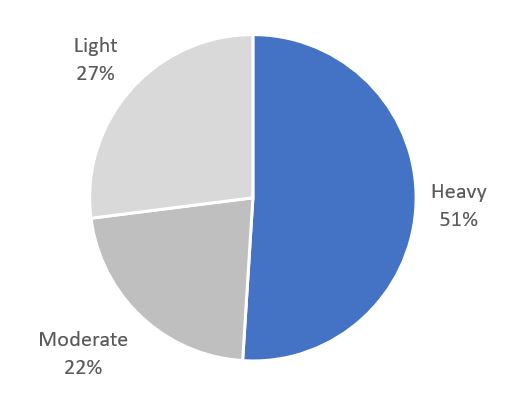 A heavier boat will be more comfortable in heavy weather and is usually more robust all around.  One of the Dufour 35s (moderate to heavy displacement) that crossed in 2017 had just completed the Northwest Passage where they collided with an iceberg at 7 knots and suffered absolutely no damage. Similarly a CT 41 (heavy displacement) this year hit a coral head at 6 knots and received minimal fibreglass damage at the front of the keel.

But heavy also means slow, especially in light air.  A fast boat can sail through conditions in which a heavier design would languish or be forced to motor.  It can also move more quickly and often avoid weather systems.  While you might not want to get caught in a storm in a light displacement boat, the view is you might not have to.

Defining a boatyard as a reputable offshore boatyard is a dangerous and ultimately futile exercise.  Beneteaus, Jeanneaus and Lagoons make up 20% of the boats in the survey group.  They are reputable production boats, but are not known for making offshore boats.  The rest make up the gamut of other builders, including: Deerfoot, Dufour, Fontaine Pajot, Hans Christian, Hunter, Island Packet, Lapworth, Morgan, Ovni, Pacific Seacraft, Tartan, Valiant , etc.  Some are known as offshore builders, while others are not.  Only 33% are on John Neal’s list of recommended cruising boats.

This is one criterion that seems to be consistent across the board. 71% of the boats were listed as having relatively large, factory built, water and fuel storage capacity.  Boats that don’t have factory-built large tankage are often augmented for long distance cruising.  Our own Dufour has had a diesel tank added and two water tanks to make it more comfortable on long passages as well as extra cabinetry installed.  Friends of ours on a newer Dufour make up the difference with umpteen jerry jugs to hold diesel and water.

SO, WHY ARE ALL THESE NON-BLUEWATER BOATS ABLE TO CROSS AN OCEAN?

The list of boats that successfully made it across the Pacific in the last couple of years does challenge the traditionalist perspective about essential offshore elements.  What explains the difference between what we think should be able to cross an ocean and what is actually crossing?  The most likely explanations are: weather forecasting and preventative maintenance.

The difference might be explained by technological advances, specifically access to better weather forecasting and the advent of GPS.  These combined mean that, for the most part, heavy weather and rough seas can be avoided, especially big lower pressure systems. It is rare for a boat that has access to daily weather forecasts to get caught by a large storm. For heavy weather avoidance, the big slow boats are at a disadvantage because they can’t use light winds to sail through large areas and might not be able to move fast enough to avoid an approaching system. The longer a passage takes, the more exposed the boat and crew are to inclement weather.

Based on data gathered from over 150 boats that crossed the Pacific in the last 6 years (2012-2017), the average maximum reported windspeed was 32 knots, with 82% of boats reporting maximum windspeeds below 40 knots.  The high windspeeds were almost always due to squalls around the equator and lasted less than 40 minutes.  Almost any ocean-going sailboat can handle this windspeed and the accompanying sea state. 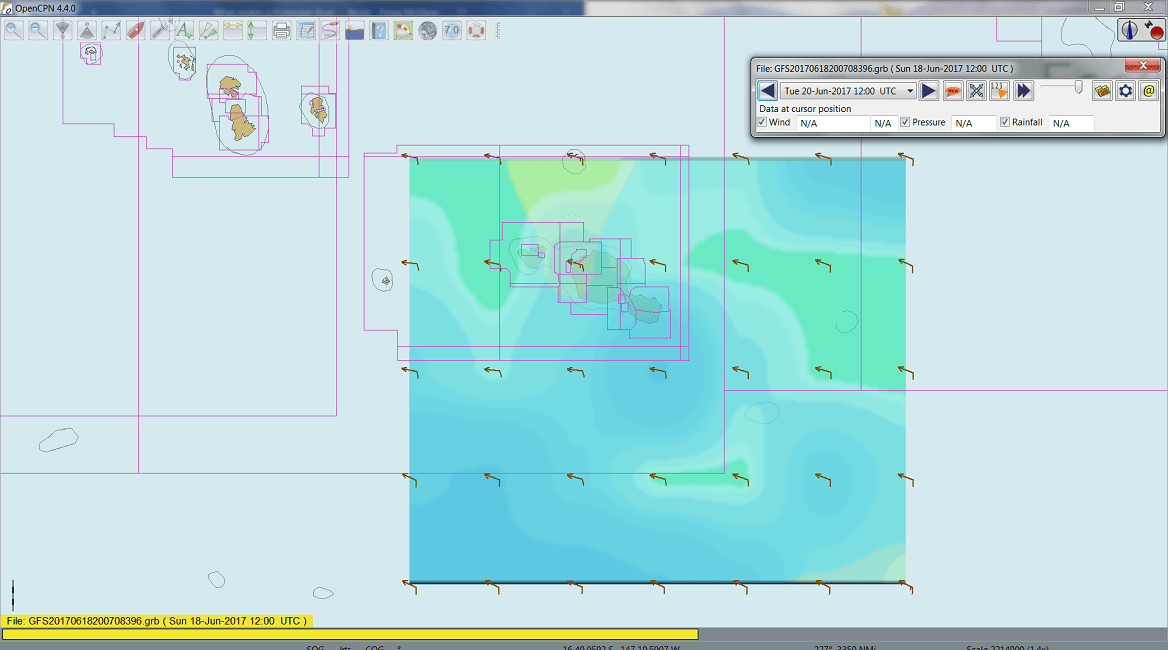 So many of the problems associated with any boat can be avoided through regular maintenance and checkups. Small issues can often be easily managed with the right spares and tools before they become larger catastrophic problems. this rule applies to all boats whether they are going offshore or not.

Of the 150+ boats that crossed in the last 6 years, only 16 reported no significant breakages during the crossing and the overwhelming reason touted by these sailors was preventative maintenance. The rest who had significant gear failures were almost always able to manage a repair at sea with the right spares and tools onboard.  Only a few required being towed into port and none were abandoned. 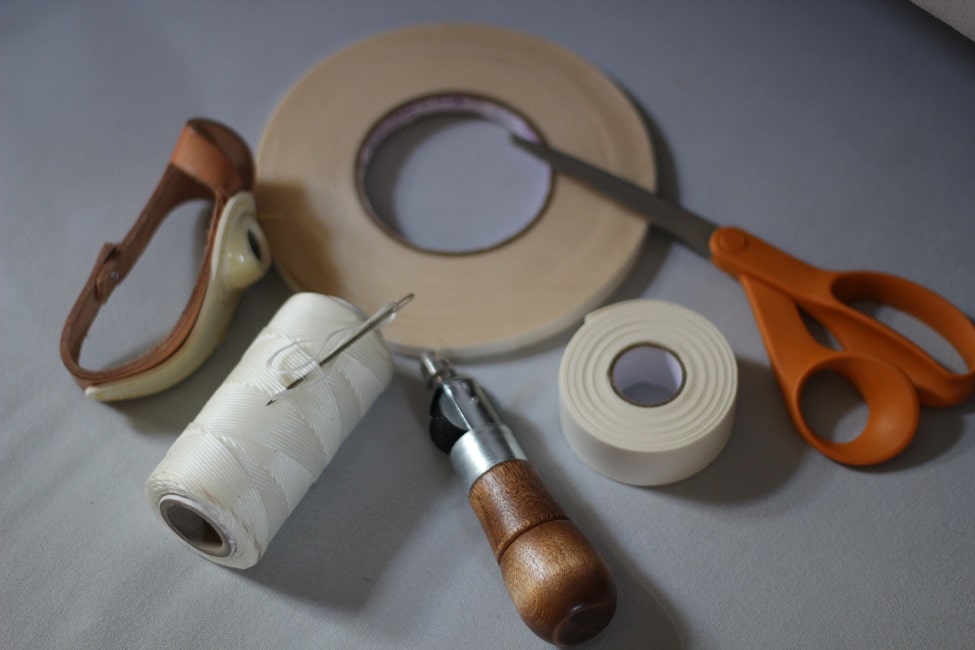 SO, WHAT EXACTLY MAKES A BLUEWATER BOAT?

You do. It is neither my intention to end the bluewater boat debate, not to recommend one style over another. Windspeed and sea state are not the only factors to consider when offshore cruising. There are also fishing lines and nets, coral heads and other obstructions, constant wear and tear on gear, comfort below decks, galley design, sea berths, and many other factors. Picking the right boat for offshore cruising is a personal experience. The most important thing is that you know the boat and feel comfortable sailing her in a variety of conditions.

Missing on the list but in the top 10: Hallberg Rassy and Rustler.

I think where sailors get hung up is the difference between the words 'best' and 'capable'. Everyone wants 'best'. But how many can afford it??

I was once told our 28' Hunter wasn't 'capable' of going to the Bahamas. That is not true, it is very 'capable' of traveling from southern Florida to the Bahamas. Is it 'capable' to live on, have enough water, etc for a long stay while there?? Probably not. At least, I wouldn't want to do it. But I would do a week trip if I had the time and weather window available.

A boat is 'capable' depending on the needs and abilities of the sailors crewing and the adventure planned for her. I wouldn't dream of crossing the Atlantic on her.

But I know of a few captains that would enjoy the challenge!

Thanks for providing such a detailed discussion.