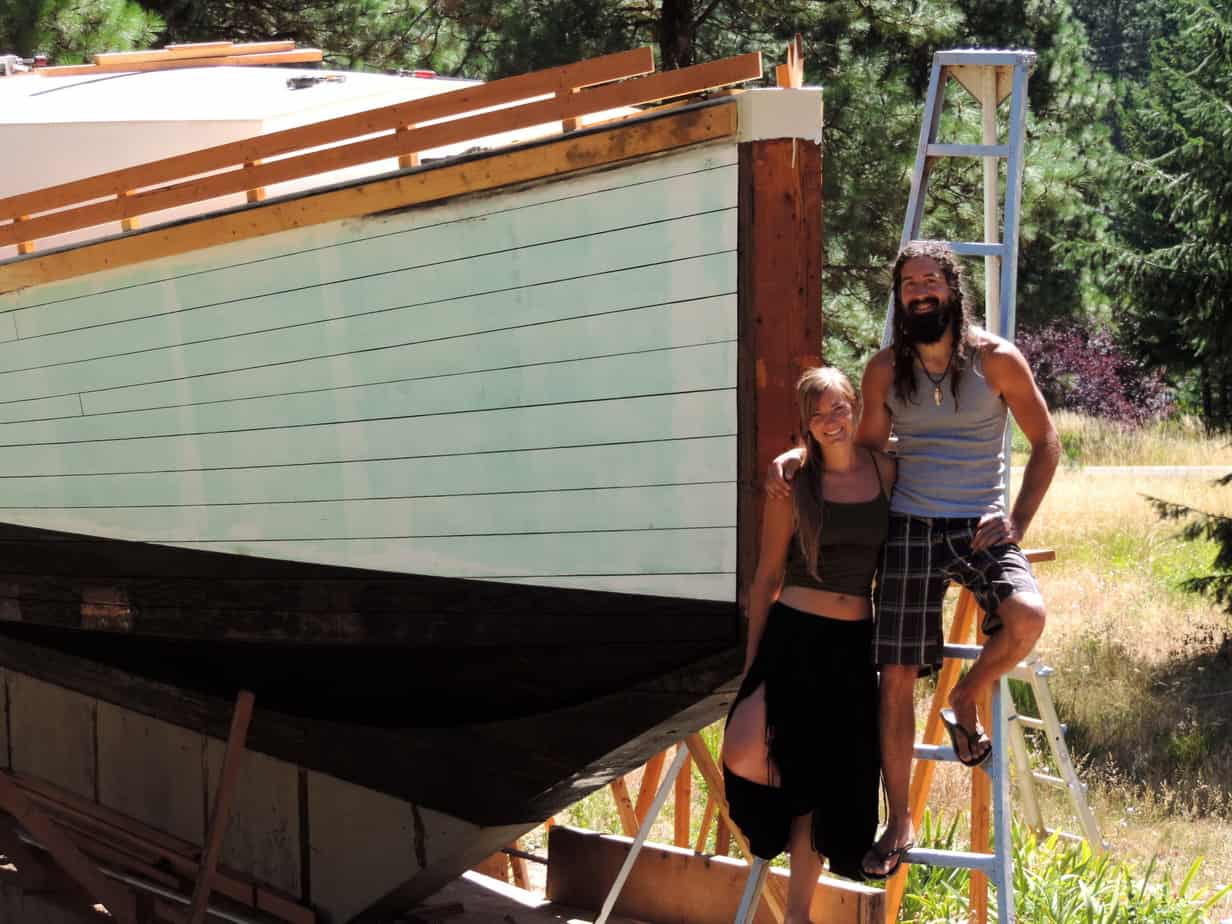 Most sailors, myself included, are die-hard romantics, suckers for the idea of sea spray, free-living, and adventures just over the horizon. Perhaps one of the ultimate sailing fantasies however is boat building. Felling a carefully chosen tree, shaping timbre with your hands, the smell of sawdust in the morning… If you’ve ever had the thought, “Maybe I’ll build a boat one day,” then you’ll appreciate Ruth and Garrett Jolly’s story, building a 35 ft. wooden boat, in the depths of the Washington wilderness.

A short drive from the small community of Snowden, Washington about 2,320 miles above sea level, are the workings of a soon to be launched 35 ft. wooden gaff rigged ketch. Ruth and Garrett Jolly have spent the last two years employing age-old techniques, in crafting their dream vessel. They live on-site in a toy travel trailer with no electricity or running water, battling the harsh Washington winters to bear their project to fruition.

I learned about Ruth and Garrett after coming across an episode in their popular vlog, “Salt & Tar” in which they walk into the woods to select and fell a tree for the mast of their boat. I was curious to know their story. In this age of power and plastic, what motivates two 24 year olds to build a wooden boat in the dark woods of Washington? My curiosity piqued, I had a video call with Ruth and Garrett and we talked about what had propelled them on this boat building adventure.

Garrett grew up on the central coast of California. As a kid he remembers him and his brother being inspired by the film “Water World” and shortly thereafter fashioning a vessel out of two abandoned kayaks, plywood, PVC, and poly-tarp; proudly dubbing it the “Crackermaran”.  “We launched it into the bay,” Garrett explained, “Of course that didn’t work very well but it was still pretty cool. That was the beginning.” Garrett went on to fix up several orphaned boats: an 8 ft. Sabot that he found with a tree growing out of it, a 14 ft. Lido, and a crippled 23 footer with a 4 x 3 ft gouge at the deck-hull joint.  At the age of 12 or 13 he built his first boat, a 21 foot dory style gaff cutter.

Garrett and Ruth met when they were 15. “Our families took vacations at the same time to Aruba, though they’d never met each other before,” Ruth told me, “Our mums met and said oh you have a 15 year old son, I have a 15 year old daughter. So really our mom’s set us up!”

After the trip, the two stayed in touch, writing letters and taking the train to visit each other on school breaks. Then right before finishing school and turning 17, Ruth and Garrett bought their first boat together. Garrett described taking Ruth out for her first sailing experience, “The very first trip I took Ruth out sailing was on this engineless 30 ft. boat, bashing north through point conception in 40 knot winds. It took us 3 days to get around the point! It was the ultimate test.”

When they turned 18, they sailed to Mexico. “We really liked the life and we really liked living aboard,” Ruth explained, “But our boat was just such a piece of junk. We got it for 4,000 bucks. It didn’t have an engine, didn’t have an ice-box, didn’t have a toilet, running water, sails from 1964, and we kind of just fumbled our way down the coast.”

Over the following years Ruth and Garrett owned 6 boats together. “We kept buying boats trying to find something that was right,” said Garrett, “A big part of it was that I love wooden boats, I love the history of wooden boats and they’re dying.  There’s no interest in them anymore and so many of them are being crushed. And every time a wooden boat is crushed that history is lost for ever. So a lot of it was that we’d find these old wooden boats on the chopping block for free or a couple of thousand bucks and it wouldn’t necessarily be the boat that we wanted but I couldn’t stand to see it destroyed. “

They soon realized they’d stumbled upon an unlikely enterprise, “We could buy these old wooden boats for nothing and just put in labour and reclaimed lumber. Not really spend any money, and turn them around for a huge profit.”

In a last ditch effort, the couple bought a fibreglass boat. “We started sailing and it became very quickly apparent that it just wasn’t going to work,” explained Garrett, “The boat had no soul. It was so sterile. Everything was so pretty and shiny and white, it was like a dentist’s office.”

Shortly after they met a solo sailor cruising in San Francisco bay that became a friend and offered them the use of his family property up in Washington. Ruth and Garrett sold their boat, bought a truck and tools, and went north. “We’d never seen the property before or anything, “ Ruth told me, “We didn’t even know what design boat we were going to build yet. But that’s kind of how it started. We went through so many boats trying to decide what was right and just couldn’t find one, so it made sense to build one.”

Ruth explained they had limited resources, “We’re not trust fund babies, we don’t have a whole lot of money to be pouring into this but we have the passion.” They initially funded the project with the proceeds from selling their last boat. It was enough to buy a truck, tools, and a toy travel trailer. They lived simply with no electricity and no house. In the beginning Ruth worked 3 days a week in town serving a little pizza joint. “That was my one rule,” said Garrett, “That Ruth was not allowed to work more than 3 days a week. Because we don’t need a lot of money, we just need enough to get by.” They soon began filming their experience and posting on YouTube, quickly developing a following, which has helped them fund their project.

Garrett said they were also able to save cost by using salvaged and reclaimed materials. “We’ve tried to use as much salvaged and reclaimed wood as possible. We got so much wood out of this old school building that they demoed from the ’40s and the guy saved all the rafters and stuff. We just got it for pennies on the dollar and it’s the best quality wood that you can get.”

As you might imagine building a boat has its challenges. “I’ve definitely had a few points where I’ve asked myself, “What the hell did I do?”” Garrett explained. This one time, I’d just built the big keelson (the main backbone timber of that boat). The wood that we got was supposed to be dry but apparently it wasn’t as dry as advertised. So as it dried in the hot sun it kind of bowed a little bit. I’d worked so hard (this timber is like 32 ft. long 12 ft. by 9 inches) and I come out one day and it’s bowed. It was probably like the first time I thought let’s chain saw this thing up, burn it and go buy another boat.” Fortunately this feeling was fleeting, “When it comes down to it, building a boat is one of my biggest dreams in life. That’s what pushes us past those moments.”

There were also exhilarating moments, like laying the first planks and, “Pouring the ballast, pushing your hands in the cement of what’s going to be underneath you.”  In the lows of winter they enjoyed putting the deck on, and building the cabins and interior. “Being able to start to picture the layout is a huge boost in moral,” Garrett told me, “I’m finding a new motivation after this very gnarly winter.”

What advice do they have for other young people looking to build a boat or get into sailing?

Garrett: “I think it’s not really about skill or money, it’s all about attitude and how bad you want to do it. Yeah I worked with wood growing up so I had a bit of a head start but I’m not a shipwright, I’m just a wood butcher. You can find ways around the financial and the skill. Buy some cheap tools and some cheap lumber and start cutting stuff. Some naval architects see themselves as wizards and speak about talking to the wood, and its all bull crap, it’s not rocket science it’s totally doable.”

Ruth: “Immerse yourself in sailing. Crew on someone else’s boat. You can even fly somewhere else already tropical and get going immediately!  Garrett’s mom got inspired and found this site called Love Sail, an online community for finding crew. There are so many avenues and it just takes that initiative to go for it. If you think you’re interested in the ocean, the best way to find out for sure is to get out on the ocean. It doesn’t need to be scary because you start hanging out with the people and you get pumped.”

Ruth and Garrett will soon be trading in saw dust for sea spray, when they launch Rediviva and set off on their cruising dreams. To follow their adventures go to https://saltandtar.org/.