“Should I buy a boat?” you may be wondering. The days are getting warmer, you’re already dreaming of summer cruising… but what about the cost, maintenance, and responsibility? “Buy the Boat!” says 27-year-old Julia Kane (@sailingdazz). In this guest post she shares the trials she faced becoming a first time boat owner and why it was all worth it!

If you’re buying a boat, check out our Ultimate Guide to Buying a Boat, which walks you through everything from where to find a great deal, to understanding boat valuations and pricing, to a free boat inspection checklist.

Drip. Drip. Drip. Drip. Drip. Not an ideal noise to hear on your liveaboard sailboat at midnight the night before you’re leaving for a week-long work trip. “Shit shit shit shit shit shit SHIT!” I said, peering into the back of the engine compartment with a headlamp. My boat was sinking, albeit at a very slow rate. Three drops a second, to be precise. Cursing all the while, I began the laborious process of emptying out the starboard lazarette to access the back of the engine and shaft. Out came the ditch kit with flares of dubious efficacy, the emergency generator that had only run once before giving up the ghost, the mold-spotted orange life vests. Despite the fact that it was past midnight, the South Florida heat was stifling and I was covered in sweat when I climbed down into the laz. Upside-down and sticky, I confirmed that, yup, there was definitely salt water on the wrong side of the hull.

A year earlier I had moved to Key West, Florida for a job and had the brilliant idea that I would live aboard a sailboat. I researched boats for months before finally finding a viable option – in decent condition, within my price range (plus or minus a few thousand), and only a weekend’s sail away. I bought the boat, but not without some serious hemming and hawing. A week before making my offer I had split up with my boyfriend of two years. Between the two of us, Ben was the sailor. He’d raced for years, made the Newport to Bermuda run through a tropical depression, and could fix just about anything. I, on the other hand, wasn’t particularly comfortable sailing anything larger than a dinghy, thought fifteen knots of wind qualified as “heavy weather,” and literally couldn’t even change a tire. I had no business buying a sailboat.

Upside-side down in the laz, I saw that there was a steady drip coming from what I can now positively identify as the shaft seal, corroded to the point that the entire thing was Statue of Liberty green. At the time, I wasn’t sure what was leaking or why, and I went through all the stages of boat grief… cursing loudly, wondering if I could fix it with duct tape, contemplating whether my insurance policy was up-to-date, crying on the floor of the cabin. In hindsight these were somewhat ridiculous reactions (aside from cursing loudly, which everyone knows is de rigueur for serious and aspiring sailors alike). But at 2 am by myself, the incessant drip, drip, drip was a major concern.

At 3 am I picked up the phone and called my friend Reid, who was sleeping in the cab of his 18-wheeler truck somewhere in the middle of the country. A veteran of the Baja Bash and a life-long sailor, Reid calmly walked me through how to identify and then tighten my shaft seal. “Do you have a pipe wrench? No? OK, I’m going to teach you some hobo engineering.” I will be eternally grateful to him for answering his phone at that ungodly hour and calmly walking me through some basic boat maintenance that I probably should have learned a lot earlier. Thanks to his help, I emerged from the engine compartment covered in sweat, bilge muck, and salt, but ultimately victorious. DAZZLER was no longer sinking. Crisis averted! 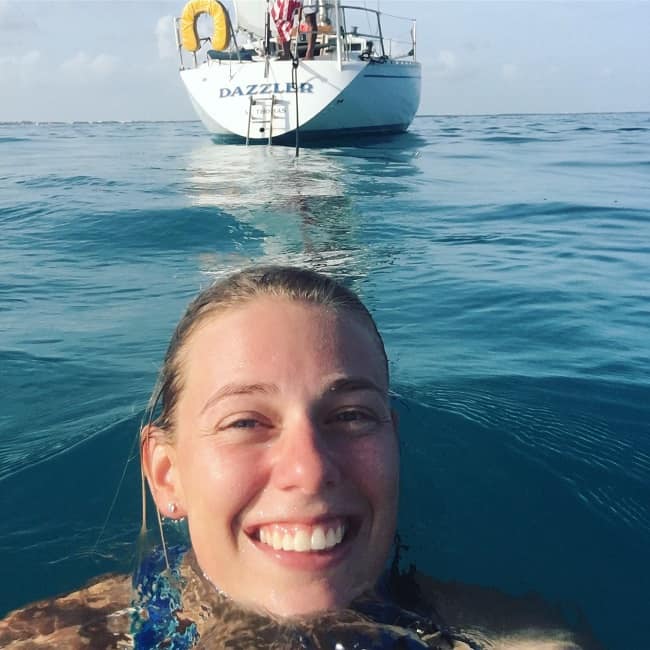 “As a single woman in my early twenties, buying a sailboat was a daunting undertaking.”

There are a lot of badass women out there who are great mechanics, carpenters, and electricians, but unfortunately, I’m not one of them. I’m a competent sailor and navigator, but I’ve had to make a serious effort to learn how to maintain and repair my boat to keep everything in good working order.

Here’s one thing that I’ve figured out, though: no one is 100% sure of what they’re doing. Joshua Slocum left Boston Harbor for a round-the-world voyage without any cold weather gear. Before she was even launched, John Wray’s newly-built Ngataki took a flying nosedive off her over-greased skids and went through a stone wall. Bernard Moitessier ran both Marie-Therese and Marie-Therese II aground, sinking them, before he wised up and got himself a steel-hulled ketch. All three went on to become sailing greats – they crossed vast oceans, survived ferocious storms, and visited parts of the world their peers couldn’t even dream of.

But how can you become an old salt if you’re afraid to dip your toe in the water as an amateur? I’m not saying that you shouldn’t do your research or that you should skimp on training or safety equipment. What I am saying is don’t let the fact that you’re not wholly comfortable sailing prevent you from doing it! How many people, especially women, have felt the sailing itch but never actually untied the lines and headed out?

I wasn’t sure what I was getting into that day when I handed a Fort Lauderdale Yacht Broker with greased back hair a check worth more than my life savings. He assured me that in about a week I’d get a title in the mail. Just like that, DAZZLER was mine. When I stepped onboard, by myself, for the first time, I breathed in the salt air, the trace of diesel, and the familiar musty smell that inhabits old boats like the smell of aging books inhabits libraries. I was elated, but also terrified. 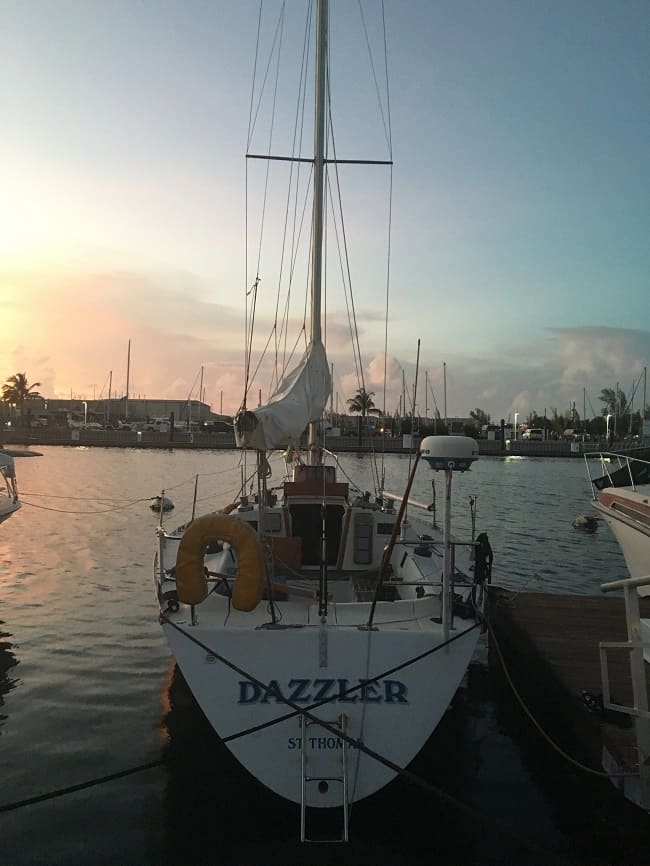 “I’ve made a lot of mistakes and learned a lot of lessons the hard way.”

While sailing from Fort Lauderdale to Key West on my inaugural voyage aboard the DAZZLER, the delivery captain who I assumed knew better than me ran my boat aground on a charted four-foot reef. (Fun fact: a 1984 Beneteau First 32’ drafts six feet.) In another classic blunder, while sailing out of my Mediterranean mooring on a first date with a guy who was new to line-handling, I inadvertently sucked a mooring line up into the prop and had to dive under to un-foul it. (There was no second date.) In yet another stroke of genius, I used a curling iron to melt the heat shrinks on the bilge pump float switch I had just re-wired, resulting in a particularly nasty burn on my finger. (Although the curling iron worked, I’d highly recommend investing in a heat gun.) The list goes on and on… Thanks to a healthy dose of pigheaded perseverance, as well as the patience, good will, and generosity of many friends and boat neighbors who have helped me along the way, DAZZLER is still afloat.

I’ve had a lot of fun sailing with friends, enjoying sunsets, sundowners, and the occasional bit of “sporty” weather, but the experiences that will really stick with me are the times when I wanted to give up, but couldn’t. There is absolutely nothing as empowering as doing something that you genuinely didn’t think you were capable of, whether that’s getting an uncooperative exhaust hose over a waterlock muffler or single-handedly backing the boat into a tight slip with 20 knots of wind off the beam. Even if you have the most wonderfully helpful friends and neighbors, when you are just one person on a sailboat, there are certain things you just have to do yourself. When those times arise, you’ll find that you are capable of much more than you originally thought.

Despite the sleepless nights, the not-so-brief moments of panic, and the occasional second-degree burn, I’m glad that I bought DAZZLER. I’m glad that I didn’t wait until I felt 100% ready to make the leap. In the words of Bernard Moitessier:

“…for a sailing boat is never really ready, as any cruising man well knows. But he also knows that by trying to prepare things too well does, in fact, do nothing more than continue to polish what is already bright, while losing sight of what really matters: to go to sea with everything fair and square, not to be a maniac for perfection.” 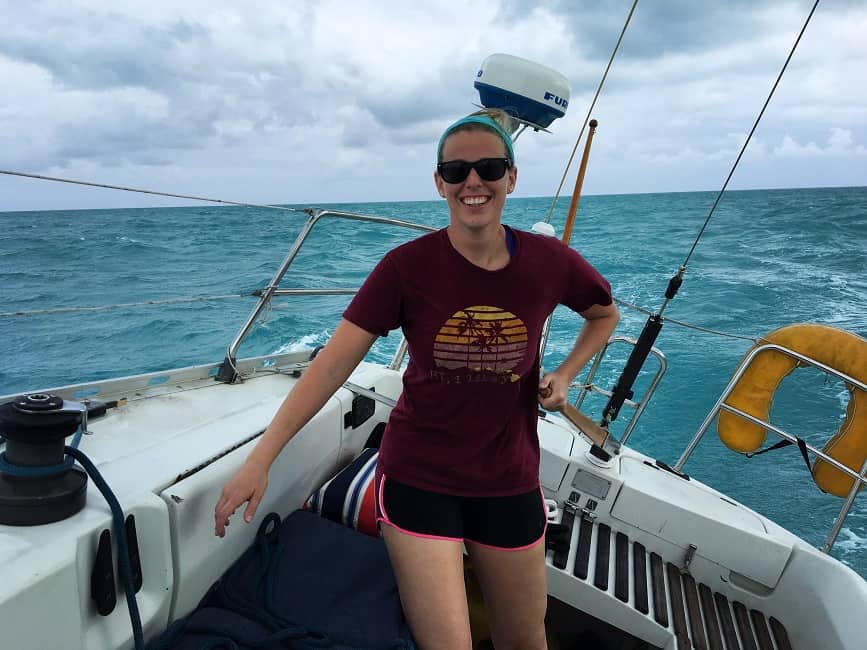 Julia (@sailingdazz) first learned how to sail Tech Dinghies as a kid on the coast of Maine. In 2013, she bought her own boat, a 1984 Beneteau First 32′. After sailing from Fort Lauderdale to Key West, FL, she lived aboard for two years. Julia currently lives and sails in the San Francisco Bay Area.

Still thinking, “Should I buy a boat?”. Get expert-researched answers to your questions in Good Old Boat Magazines 50+ page article collection on boat buying, FREE when you subscribe for one year.

I do wish anyone wanting to live onboard a boat and possibly sail it off around the world would spend more time researching which type of boat is best suited to that purpose. I see far too many first time dreamers get it wrong.

This article could not have come at a more perfect time. I am in my late 50's and recently widowed. Although I have always had a love for sailing and the ocean (I grew up sailing), I never had the time for it after college. But fast forward over three decades later...and now I do! I am so glad I came across this story. You have a way with words that pulls on my heart strings, and I can feel your contagious excitement through my computer screen! My late husband also had a love for boats (especially the forgotten ones). He had an old boat that he would enjoy fixing up on the weekends until we moved to Utah. It was definitely a learn as you go process, that was also never ending. But I think that is why people fall in love with boats. You learn about them, while also unknowingly learning about yourself. So thank you Julia, for sharing your bumpy story and making me consider dusting off an old dream of mine. Best of luck :) Juniper