When guest poster Jamille Austrial’s long term career dream came to an abrupt end, she set out on what was meant to be a two-week sailing vacation. Instead she found herself on a 6 month adventure, working as a dock-hand, and immersed in a plan to save a quaint little marina from a logging operation.

Falling in love wasn’t part of the plan

“I’m so sorry but you are not continuing on for the next practicum,” my nursing instructor said to me on a cold day in February, 2016. I was devastated. My longtime dream had been to become an emergency room nurse and I’d gone so far as being sponsored by my health authority to complete a nursing specialty at BCIT. It would seem my dream had hit a dead-end. I came home to Sea Fiesta emotionally shattered and crying in front of my captain, Dave.

Poor Dave, at times he has seen the worst of me. In a bid to take my mind off it, he suggested we take a two week sailing trip to Hornby Island. Our friend Mateo was moving there and needed a way to move his belongings. “It will be good for you and good for the boat,” Dave insisted. It had been only six months since we’d bought Sea Fiesta, our 59 ft Samson C Strutter Ketch, and this would be our first chance to take her on a real trip, not just a quick weekender. 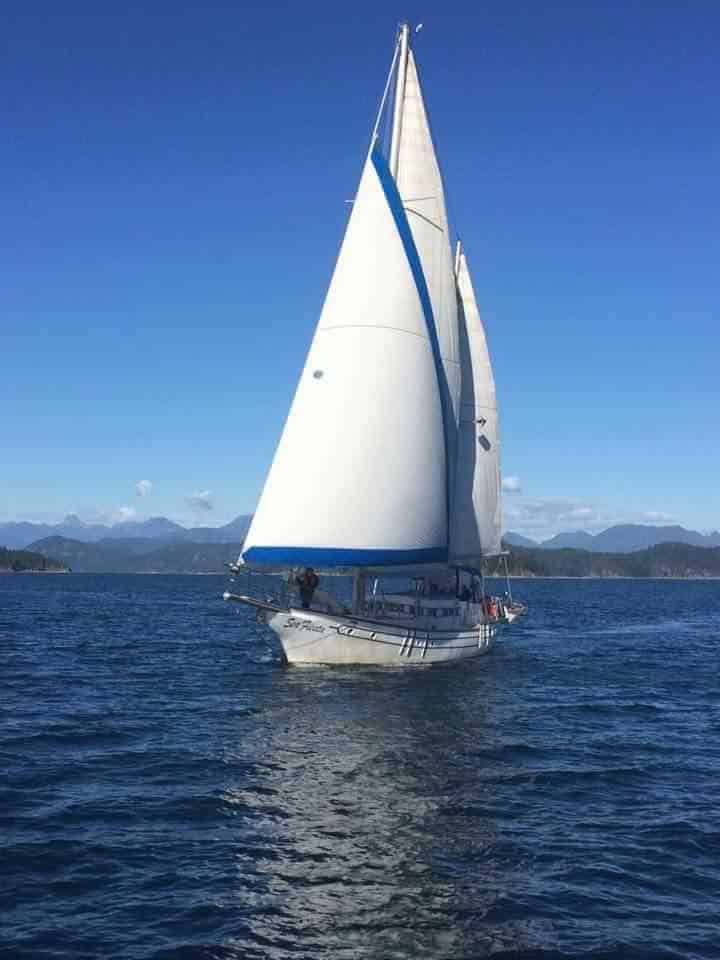 We left in March 2nd. It was an uneventful trip across the Georgia Straight (our first time), though we did end up waiting out a three-day storm at Secret Cove Marina. After successfully delivering Mateo and his worldly possessions to Hornby Island, we thought, “Why end the trip now, we’re having such a good time,” so we decided to keep heading north.

By Easter we’d reached Desolation sound, where we met the owner of a wooden trawler boat who enchanted us with tales of unlimited electricity at Ocean Falls and the amazing communities up at Bella Bella.  We were on no set schedule, so on we went. The days passed quickly; we sailed through surge narrows, caught huge Dungeness crabs and watched the porpoises play on our bow. As we made our way past Port Harvey, arriving at Minstrel Island, we noted a sign, “Lagoon Marina – free prawns at 5pm Happy Hour.” Intrigued, we decided to pull in.

Our first dock for more than a week, we couldn’t wait to charge our batteries and get a good night’s sleep before heading out early to Port McNeil the next day. The only boat docked at Lagoon Cove, we were met by the owner Jean Barber. Jean invited us up for hot chicken soup in her red and white house up the hill. Jean was a widow, and had run Lagoon Cove with her husband Bill for two decades before he passed away 3 years ago. At 80 years old, this tough Romanian lady, could still easily beat a 20 year olds in an arm wrestle. Over chicken soup, she asked us if we knew anything about water systems, explaining that there was no water at her house, and she had to carry 20 ltr jugs of water up to her house so she could cook , wash and clean. We decided we could spare a day and agreed to stay one more night to help with their water pipes. 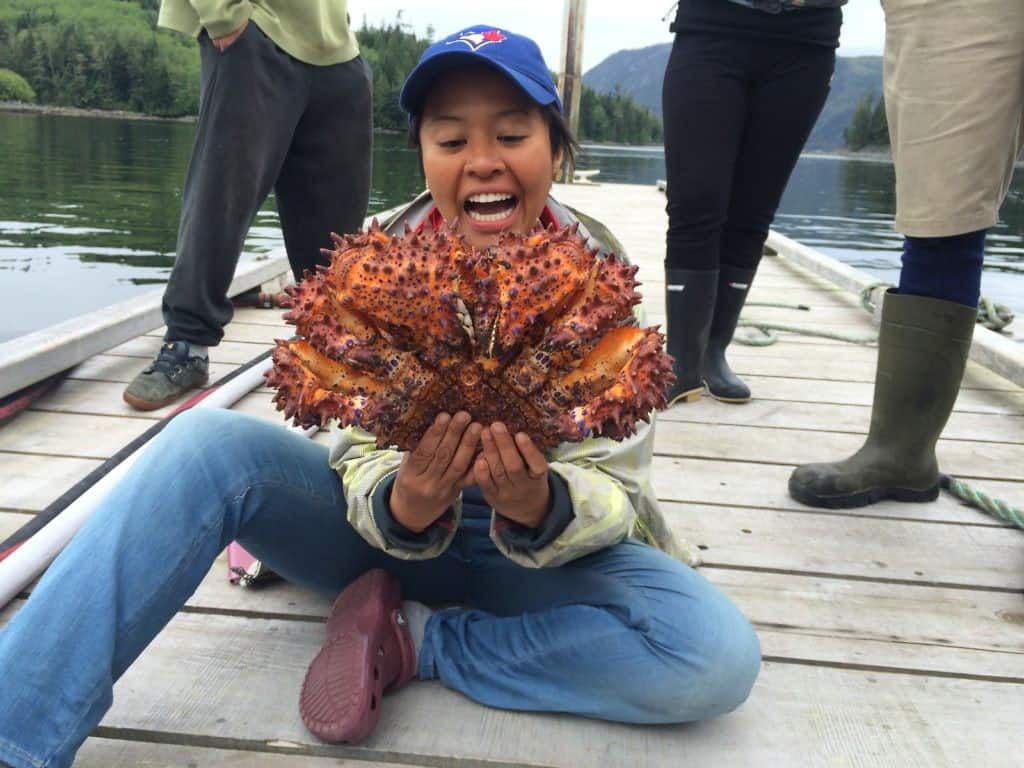 The next day, while we were climbing up and down the hill looking for leaks, Jean called over to us. Would we stay throughout the weekend to help her out until her new employee arrived next week?

That weekend, Jean taught us how to catch and cook “Lagoon Cove Style” prawns, which we served to guests who gathered by the ramp for potluck appies.

Soon after, Jean made us another offer, “Help me until the first week of May.” Jean was planning to sell Lagoon Cove Marina to a logging company, but the deal wouldn’t close until the end of the month and there were plenty of guests to care for, and projects to do before then.

Lagoon Cove is set in a small bay at the head of Clio channel across from Minstrel Island. The shoreline boasts several beautiful middens (piles of broken white shells) that glowed pink when there was a particularly fiery red sunset. We spent time exploring the network of hiking trails and met many of our new neighbors: black and grizzly bears, cougars, snakes, minks, eagles, crows, swallows, purple martins, and owls to name a few.

When May 6th arrived, the loggers decided to postpone the sell date. Jean asked us if we could stay another month. It was wash, rinse, repeat. We didn’t mind in the slightest, we were enjoying meeting new friends and docking boats.

As the spring turned to summer, we began to hear stories about the fates of other marinas being bought-out by resorts or logging operations. Shawl Bay marina had been purchased last year and closed to visiting boaters while construction was underway. Greenway Sound used to a bustling family run marina. It is now abandoned and the docks have been taken away due to safety. Other boaters told us how they miss these rustic family run destinations. Many of the cruisers we met had been returning to these marinas every summer for the last twenty years.

Lagoon Cove was also important to the local fishermen, boaters, and residents, the Broughton Archipelago community relied heavily on access to Lagoon Cove’s fuel dock. The next fuel stop south or north was a 2 hour boat ride away. A sense of sadness settled over us, would this colorful marina that we loved so dearly really end up marred by logging operations?

One day, Jim Ryan, visiting on his brother in law’s Grand Banks power boat, arrived on the dock.  Jim Ryan used to own a woodworking company of which he sold in 2015. While Jim was enjoying the sunset at the patio, we told him about the fate of the marina, and it was as if he instantly fell in love. He felt the magic at Lagoon Cove. He didn’t want to see the loggers take over the entire property and close off the destination to tourists. He was able to convince Jean to sell the marina to him instead. There were a few weeks of suspense until the sale with the logging company was cancelled, but ultimately Jim won his prize. We ended up staying for 5 months throughout the summer helping run the marina until Jim and his family took over.

Everyone was really happy that Lagoon Cove would be staying open. Though we hadn’t sailed as far north as we’d planned, we’d had an incredible summer. A two week trip had turned into a 6 month adventure, that had introduced us to a whole new way of life. Being up at Lagoon Cove, where resources are scarce, taught me how to be more in tune with nature. I’d learned that small actions can dramatically change one’s own fate or even that of a marina. That so much is possible with the support of the boating community. It was such an amazing feeling leaving Lagoon Cove knowing that it was not going to become a logging operation and that it would be lovingly cared for by the Ryan family. Travelers from all over the world would now be able to enjoy her beauty and bounty for years to come. 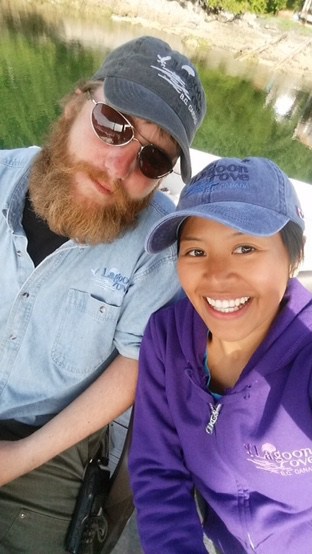 For now, Dave and myself (both 31) are slowly sailing Sea Fiesta up to Haida Gwaii for the summer of 2017, creating bonds with the locals of each little community we visit on our journey. Our adventures are posted on Facebook.

Do you have a story you’d like to see on Waterborne? Check out our submission guidelines.