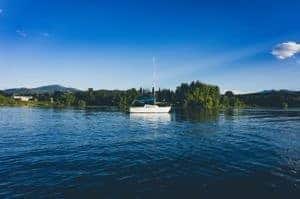 When Robin first came home with the idea of owning a boat I was somewhat skeptical. We were living in a beat-up apartment above a diner in Greek Town, Toronto. I was 25 and unemployed and he was a 29 and a student. Suffice to say we didn’t have tons of cash laying around for luxury items like boats.

In any case, we bought our first boat a CS 22 named “Hammerdown”, and then upgraded a year later to our current home “MonArk”, a Dufour 35. Along the way we’ve discovered different ways to finance our boats, none of which were apparent at the outset. If you’re thinking about owning a boat, here are 5 creative financing options.

If you live in a town or city where rent is expensive and liveaboard moorage is cheap, living aboard is a great way to finance your boat. For example, we bought our second boat for $9,000 Canadian dollars, and lived in Vancouver where renting a one bedroom apartment would cost us a minimum of $1,200 a month. Our marina fees were $550 a month, meaning that every month we lived aboard we saved $650 in rent. So in just 14 months, we’d saved enough in rent expense to cover the original $9,000 we paid for the boat. If living aboard full-time is not your thing, you could perhaps save cost by using a boat as your office space. How many lattes until you’ve paid off the cost of a boat?

2. Put your boat to work

If you’re willing to put in a bit of extra work, there are opportunities to generate side income from your boat. If you’re open to renting your boat out, you could list it with a peer to peer chartering company like Boatsetter. In San Francisco we met a sailor who was making a full time living by renting out his boat as a place to sleep on AirBnB. If you are passionate about writing, photography, or film making, there are also ways of earning money by sharing your story. Plenty of sailors have found ways to earn income from blogging and vlogging, though these ventures are definitely a longer game (minimum of 1 year before you see meaningful returns). We’ve found more near-term income by writing about our experiences for sailing magazines, earning $300-500 US for every article we sold. Every time something broke on the boat, we’d write about how we fixed it, the proceeds of which often covered the cost of the repair (see Michael Robertson’s, Selling Your Writing To The Boating Magazines for everything you need to know on getting paid to write).

If you plan on doing some ocean sailing, you can actually pay for a couple of years of travel, simply by buying and selling boats in the right markets. Potential for arbitrage exists when a sailboat can be bought or sold at different prices in two separate markets. So, for example, if you’ve set your sites on bluewater cruising, you could buy cheap in a place like Mexico, and sell high in a place like Australia, and have any amazing adventure along the way. If you are very savvy and lucky, you may be able to entirely recoup the cost of purchasing and upgrading your boat. Though it should be noted, this is no get rich quick scheme, and requires a good working knowledge of boats and boating markets.

While boat flipping is by no means common, I have met a few individuals who have managed to make it work for them. One example is Ruth and Garrett Jolly of Salt & Tar. Beginning as teens, they bought, refurbished and flipped wooden boats, eventually earning enough to buy the materials for a boat they’re building on the Columbia River. They now fund their boat building by vlogging about their experience.

A US Coast Guard study in 2012, showed that the average boat is taken out 11.3 days a year. For most of us, it’s a lot of time and money going into an asset that gets used so infrequently. Many of our friends have started buying shares in boats, rather than owning them outright. Boat sharing is a great option if you’re aim is to go sailing for a few weeks every season.

Saving the least creative, but probably most straightforward option for last… a boat loan is an option than many sailors aren’t even aware of. If you are a homeowner, you can tap into a home equity loan. There are also plenty of brokers that specialize in marine lending.

Do you have any other creative ideas for how to finance a boat? Let us know in the comment box below. Also, if you want to sail but don’t own a boat, check out our post on 10 ways to sail for under $100 a month.

You did not mention probably the most conventional way young people are buying boats these days...buying them cheap for cash or getting it free and then putting in the work to restore it. I bought my Tartan 34 for $3000 a few years ago...working on it little by little as I get time which has been scarce with family to tend to but should be launched next year...

Congrats on your Tartan Freddie, you must be excited to launch! Yes, lots of sweet deals to be had out there.