Sailing around the world solo is one of the greatest challenge you can take on in sailing. Fortunately, there are a few pieces of essential sailing gear that make things easier and a whole lot safer. I caught up with Thom D’Arcy, who is currently half-way through sailing alone around the world, and we chatted about some of the invaluable gear he’s used on Fathom, his 1991 Vancouver 28.

“When I bought her there were four main areas that I wanted to concentrate on   to make my life easier in solo sailing,” Thom told me.

“First was collision avoidance, it’s important to get sleep and not be tired so I installed a (1) radar, (2) AIS transponder, and also an (3) active radar transponder at the top of the mast.” Each system has its limitations, so even with all three systems working in conjunction, it was critical for Thom to keep watch.

If you’re not familiar with these systems, here’s a quick primer:

When I asked Thom how he used these tools with his watch schedule he said, “It all depends where I am, if I’m in a busy coastal area or close, within 100 miles of the coast. I pretty much sleep in 15 minute blocks, and that’s where it gets a little tiring and stressful. But away from the coast I just rely on the AIS alarm and have the radar going every so often doing a guard zone sweep. In the Pacific crossing, thousands of miles from land, the chances of hitting something are pretty slim, so I was sleeping most of the night when there weren’t squalls. I think I arrived in the Marquesas after 38 days feeling better than when I left.” In busier areas, Thom said, the AIS, radar, and active radar transponder allowed him to, “Sleep in short snatches and not be worried about being mowed down.”

Learn how to sail at night

The second thing on Thom’s “must-have” list was self-steering, “The boat didn’t have one when I bought her so I put an (4) Aries windvane on the back and various (5) electronic tiller pilots as well.” Windvanes, like the Aries, are a fantastic self-steering option because they’re robust, and unlike an autopilot, they don’t require power. However they’re limited in that they can only steer to a relative angle on the wind. That’s where tiller-pilots come in. Using a tiller pilot with your windvane, allows you to steer a compass course, hold course in light air, or steer directly to a waypoint.

Nothing helps you sleep at night like bomb-proof ground tackle. “I wanted to have confidence with was anchoring,” Thom told me, “So I completely redid the anchoring set up, bought a (6) Rocna anchor, a (7) new chain and an (8) electric windlass so I didn’t have to pull it up. Bit lazy maybe but I had to try and help myself here and there.” 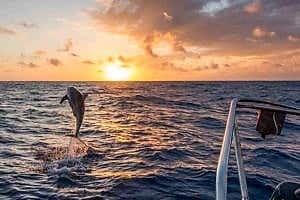 Reefing, or shortening sail, is not only a question of safety, but also comfort. “I wanted to make it easy to reef so I didn’t have to get on the deck all the time,” Thom said, “So I did (9) single line reefing all the way back to the cockpit so I didn’t have to go on deck to reef or shorten sail, so that’s another safety thing.”

Solo sailing around the world is not just preparing the boat, it’s also preparing yourself. “I guess until you do it, you really don’t know how to prepare yourself,” Thom told me, “I’ve been sailing a long time, so the sailing was OK but the sleep management was the hardest thing, because you make more mistakes when you’re tired.” While nothing can prepare you fully for the experience of sailing around the world alone, a few useful gadgets, certainly helps the solo sailor catch some much needed ZZZs.

Oh, and we did say 10 pieces of gear? Thom also has (10) a navigation app that relays information from his iPad so that he can check his course and position from his bunk. Now that’ pretty sweet! If you want to try sailing from bed, check out Navionics charts or Raymarine’s Rayview, which transforms your smartphone or tablet into a remote viewer.

For more great sailing apps, check out our post 5 best apps for sailing

For more on Thom D’Arcy’s voyage, check out The Voyage of Fathom’s Facebook page and blog. 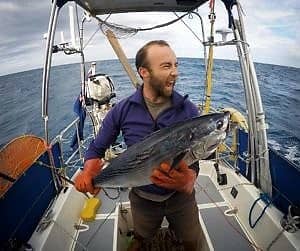