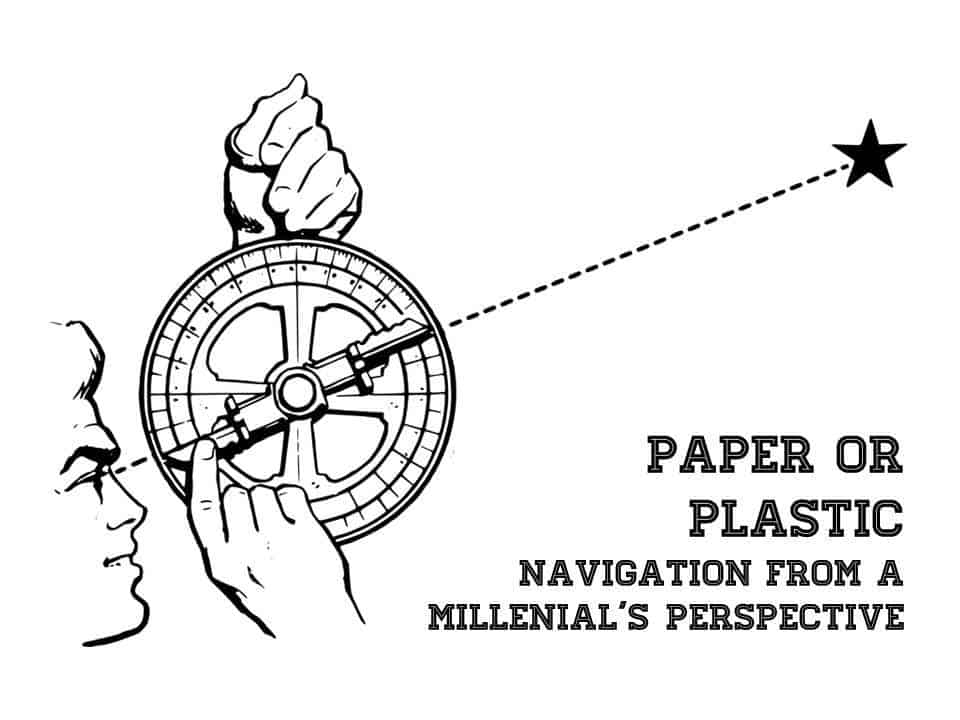 Frankly, I’m tired of some older dock hounds telling me I’m irresponsible or crazy for not having a complete set of paper charts on board.  It’s important that people go to sea feeling comfortable and confident and if you need paper charts to feel that way, then by all means take them.  This article isn’t me on a soapbox pushing for electronic charts. But things are changing and the younger generations, as they have been throughout human history, are the early adopters and as such catch most of the flak.

Navigation has changed a lot in the past couple of decades, thanks mostly to satellite and digital technologies. In February 2016, the USCG changed the requirement for paper charts in lieu of electronic ones.  The same rule applies in Canada. As a result, the equipment that sailors rely on has changed and new skills are coming to the forefront that take advantage of this technology.

An Homage to The Past

There is something to be said for the older skills.  There is an art to celestial navigation.  Understanding the rotation and oscillation of the Earth is understanding a piece of the natural world and our place within it.  Similarly, dead reckoning a position requires attention to currents, speed and prevailing conditions.  Getting a fix from three bearing points while underway requires a significant amount practice.

To misquote the Siphonaptera, old skills have older skills upon their backs to spite ‘em, and the older skills have even older skills and so ad infinitum.  Before the sextant there were variations of stellar measuring devices; octant, backstaff, astrolabe, kamal, etc.  Before them, there was only an outstretched arm and Polaris.  The unit for speed, knots, refers to counting the knots of rope over a given period that unspooled from the reel of a log that was deployed behind the boat.

Knowing one of these old skills is sort of like hipster curios; like wearing a monocle or flying a kite or using a quill and inkpot.  It’s cool and kitschy, and might come in handy in the right circumstances, but isn’t really relevant on a daily basis.

Technology changes and skills change with them.  Take Vlad for instance, he’s a sailor and software engineer and recently built an app to pull down public weather data from the US Navy and make it accessible to SSB radios and Sat. phones.  Previously, in order to view the Navy website required having a robust connection to the internet.  The app allows the user to send a request via SSB or Sat. phone to an automated handler (bot) that  in turn takes a screenshot of the requested webpage, highly compresses it and sends it back.  In the blink of an eye, you can have the world’s best and most up-to-date weather data at your fingertips.  As a sailor, that is a pretty useful skill.  To learn more about Vlad and his current adventure aboard his boat AllDay check out his website.

When I asked him if he had a backup GPS for his chartplotter, he replied, ‘actually I have eight.’  The younger generation usually have a cellphone, tablet or IPad and a computer on board, in addition to a GPS chartplotter and handheld GPS.  These devices have integral GPS units or $20 GPS dongles that plug and play into the device.  A host of proprietary and open source navigation software exist for these devices that are constantly updated and cross-referenced with satellite imagery and often with capacity for user-generated updates in real or near time.

To say that paper charts are safer than the electronic devices is to fundamentally misunderstand the functionality of these devices. 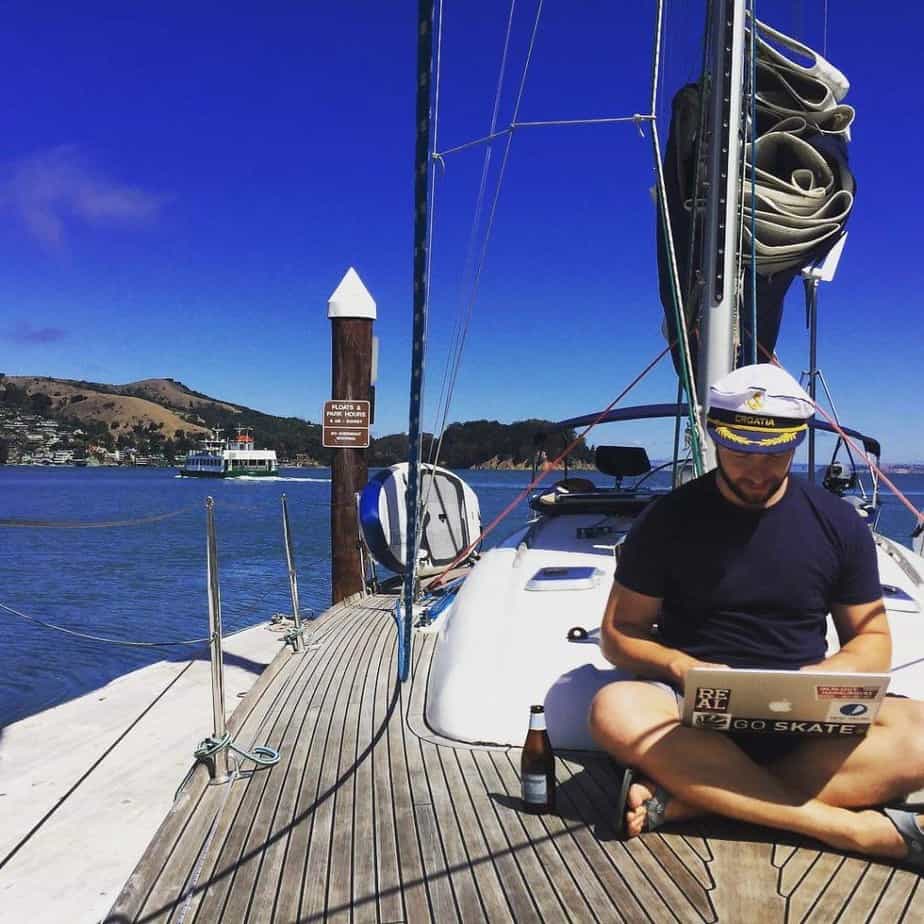 Vlad gets the best weather data in the world, sans barometer

But what if your batteries die?  What if you get hit by lightning?  What if the satellites all go down? It is a well-worn strain by the paper chart purists.  But redundancy is built into the system.  Spare, isolated battery packs, solar panels, ruggedized electronics, multiple copies, various platforms, etc.  There is even a sextant app that doesn’t rely on GPS!  The same apocalyptic questions could be leveled, and perhaps more appropriately so, at the paper-charters; what if your charts get soaked, or blow overboard, or they catch fire from your oil lamp, or they are eaten by a goat (this actually happened to Joshua Slocum enroute to the South China Sea)?

Navigation in the sailing world is changing and with it are some of the the skills useful to sailors.  It’s now more relevant to understand computer programming than how to use a sextant.  There will always be resistance to change, but embracing it opens up a new world of information and possibilities.

I've sailed with more people who bash nautical charts than those who bash GPS. You do not need a full set of paper charts. You do need approach charts and inland harbor charts. That's redundancy and requires little expenditure, space and can be lashed to a clipboard and thrown into an oversize plastic zip-up type bag to use in the cockpit. Yea, I got it with the electronics. There are always two sides of the tale and I have sailed with more people who absolutely refuse to use paper charts or plot a position once a day at sea.

The basics are there to use when you need them. I suggest a middle-ground, where electronics take precedence in today's world, but by all means, know the basics of navigation. They are easy to learn if taught the correct way. Which brings me to my final point. Most schools teach navigation like like it used to be taught for shipboard use. That's ludicrous. Practical navigation aboard small craft is often seat of the pants, but you still have to know it. I've taught how to use piloting methods without a chart in the cockpit. It's doable and it's easy.

Many folks setting sail to go coastal or offshore cruising today need a heck of a lot more training in navigation. I've sailed with many folks who ignore all except what they program into the GPS. They could not care less about pulling the "big picture" view provided by the nautical chart, even when passing near dangerous shoals or entering a harbor. That's poor seamanship in the extreme. Every GPS startup screen cautions you to use other resources.

As an old hound . . . . I love that GPS provides up to date information and makes navigation much easier than pulling out a sextant or working the parallel rule, etc. That said, having a paper chart, even if not the most recent, on board is invaluable as it provides the "big picture" view that often adds needed perspective that looking at an electronic plotter or smaller GPS screen lacks. Electronic data is a big improvement but both charts and GPS -- together -- still have an important place for a safe passage.

Personally, I love the electronic methods for navigation and use them the vast majority of the time but...I will always have a set of paper charts on board as well...better to have them and not need them than the reverse...

A very well written article that should be heeded by anyone not leaving sight of land. If you are going to blue water sea, then you would do well to stash a couple of sealed paper charts in your ditch bag, you do have a ditch bag don't you?.... or maybe the modern boat don't sink?

If you are sailing NZ waters you're lucky to see the stars to "shoot them". Maybe every couple of days you may get a chance to find out where you are. I have nav'd thru some very doubtful waters tiller in one hand and phone with Navionics in the other wending my way thru channel markers in marginal visibility and racing, turbulent tidal currents. Not because I chose to but the conditions were such that the other nav devices were out of reach, wind and torrential rain and I was ending a three day passage thru unknown waters into an unknown (to me) port in pitch darkness. Navionics told me where I was in relation to the various and many markers and shoals.Very stressful but mission achieved. Paper would have been useless given the circumstances, and yes I did have multiple back-up but not within easy reach given the conditions.

Good story. It's amazing to think what the sailors of old were able to accomplish with the aid of GPS and electronic devices. Much respect to them. Glad you made it in safe and sound and good recommendation for Navionics. Thanks for the comment.