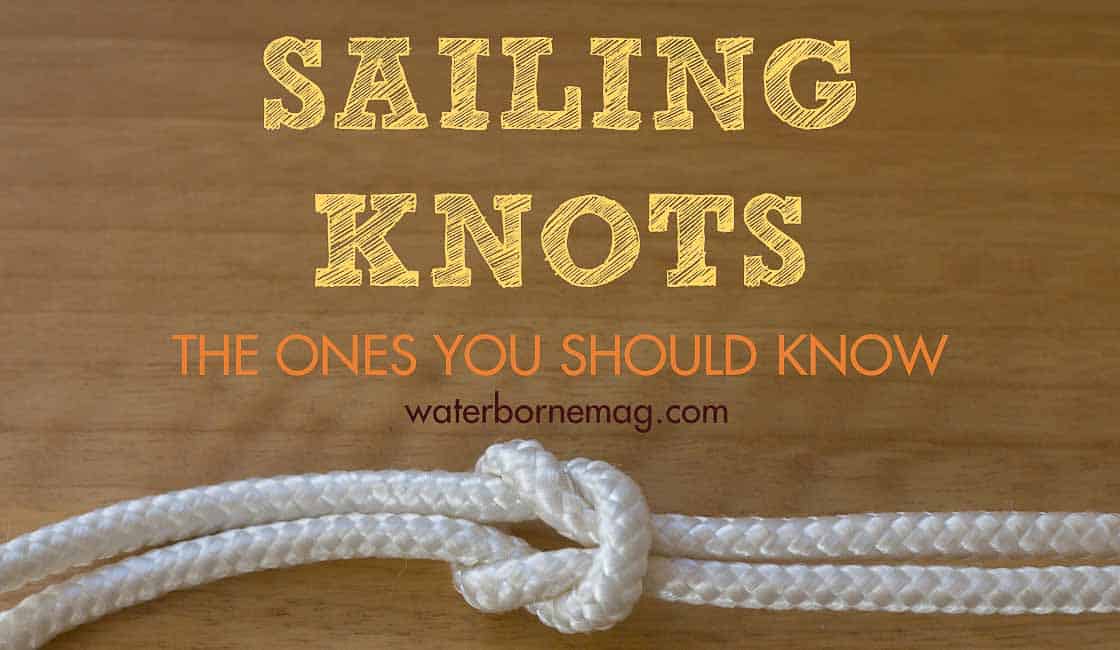 If you’ve ever found yourself fumbling over a basic sailing knot in the early season, you’re not alone. As the saying goes, “If you don’t use it, you lose it,” and it’s not unusual to be rusty after a landlocked winter (Floridians have no excuses). Fortunately, once a knot is committed to muscle memory, it should come back much more quickly than learning from scratch.

Staying practiced is key. I keep a piece of rope at my desk and use a knot-tying app to stay motivated and learn new rope work (decorative Carrick Bend rope coasters, anyone?). Read about my favorite knot-tying apps at the end of this post. If you prefer to learn on paper, check out the classic knot-tying tome, The Ashely Book of Knots.

If this is your first sailing season, don’t be overwhelmed by the thousands of knots you could possibly learn. You really only need to know a few of them.

Whether you’re new to sailing or just feeling a bit rusty, these are the essential sailing knots to know before stepping aboard.

WARNING: always verify your knot tying technique with a skilled instructor, especially when knot failure could cause property damage, injury, or death.

The most commonly used and versatile sailing knot is a bowline. It’s been used on ships for hundreds of years. A bowline knot creates a fixed loop at the end of a line. The great advantage of using this knot is that it can always be easily untied by turning the knot over and “breaking its back,” bending it downward

How to: I’ll spare you the story about rabbits running around trees and show you a video.

A clove hitch is a quick and flexible knot that allows you to speedily tie, untie, and adjust – perfect for shuffling fenders when you could have sworn the dockmaster said port-side tie!

The cleat hitch, as the name would suggest, is a sailing knot that really only has one purpose: tying a line to a cleat. Simple though it may seem, a quick walk down any marina dock would suggest that many boaters get it wrong.

Make your first turn on the opposite horn to which the line is coming in. When you go to make a locking hitch by flipping a loop away from the side of the entering line. Sound confusing? Watch this great video on how to tie the perfect cleat hitch.

It’s all in the name – one half hitch, followed by another. This is a great hitch for tying a line around a piling or some other object.

Uses: Secure a dinghy painter to a piling, secure a clove hitch and prevent fenders from slipping.

Uses: Free a jammed line, put a snubber on an anchor rode

The sheet bend is considered so essential that it’s the first of 4,000 knots listed in The Ashley Book of Knots! It’s used for tying two lines together. The lines can be the same or different diameter. It’s considered more secure than a reef knot but it can loosen without tension and should ideally be used on a load-bearing line.

The reef knot is a “need-to-know” sailing knot that you’ll rarely use. As the name suggests, it’s great for reefing, when you’re “binding” or tying down the slack sail to the boom.

However, it’s important to know their one great limitation: they will come loose when not under load. For this reason, a reef knot should NEVER be used to join two lines together because the knot can easily “capsize” and come undone. For joining two lines together, use a sheet bend.

Uses: Reefing, joining two ends of a single line to bind around an object

Figure eight or stopper knots are used to prevent a line from pulling through a block or clutch. They’re a good idea to tie in the end of your halyards (unless you relish the idea of spending an afternoon trying to fish the halyard out of your mast).

Uses: Tie in the end of jib sheets, main sheets, and halyards

What’s the old saying about idle hands? Keep a piece of rope handy and download one of these knot-tying apps.

The U.S.-based Grogono “Grog” family have a long history in Olympic sailing and their app will walk you through tying 196 different knots, everything from a basic bowline to a Brummel splice, using 3D animations and high-definition videos.

This has become my go-to app when I need a mental break between Zoom calls. Unlike watching knot-tying videos on YouTube, the app makes it possible to slowly toggle through each knot, step-by-step. I keep a list of my favorite knots, which makes it easy to quickly practice a series. Knot nerds will appreciate the informative and well-researched write-ups (in the “details” section) which describe the knot’s uses, variations, and alternatives. 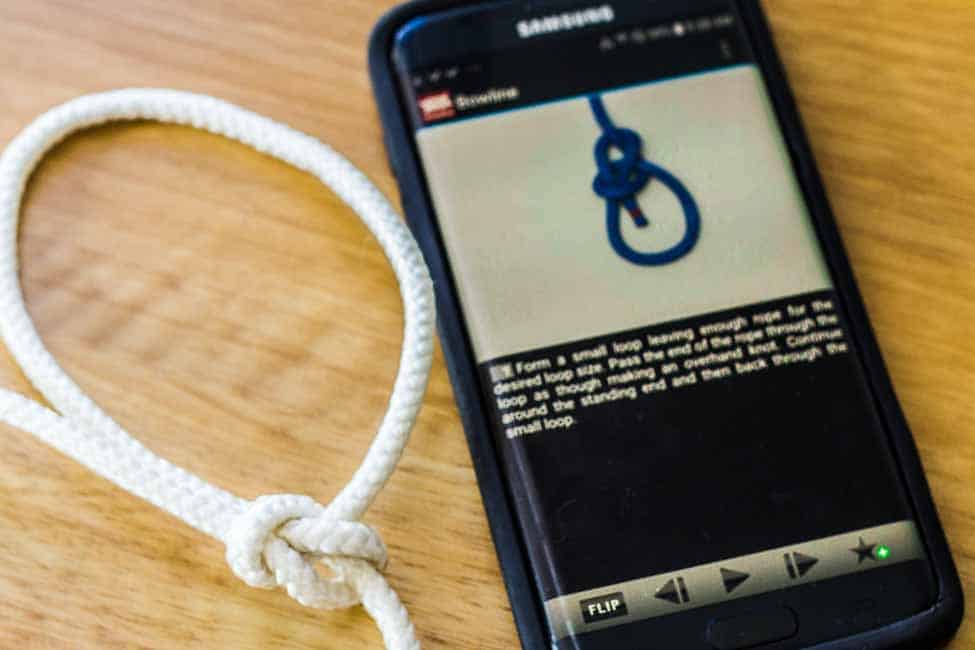 This app has instructional animations for tying 140+ knots, organized by activity (e.g., boating, fishing, camping) and type (e.g., bends, hitches, lashings). Brush up on your basic knots (or learn something more advanced) with knot tying animations that you can slow down or speed up to suit your learning pace.

Useful Knots is free but it isn’t as intuitive as the two apps above. The knots are organized by type (loops, hitches, bends) but not by activity. The app includes a series of photos for each knot along with text instructions.