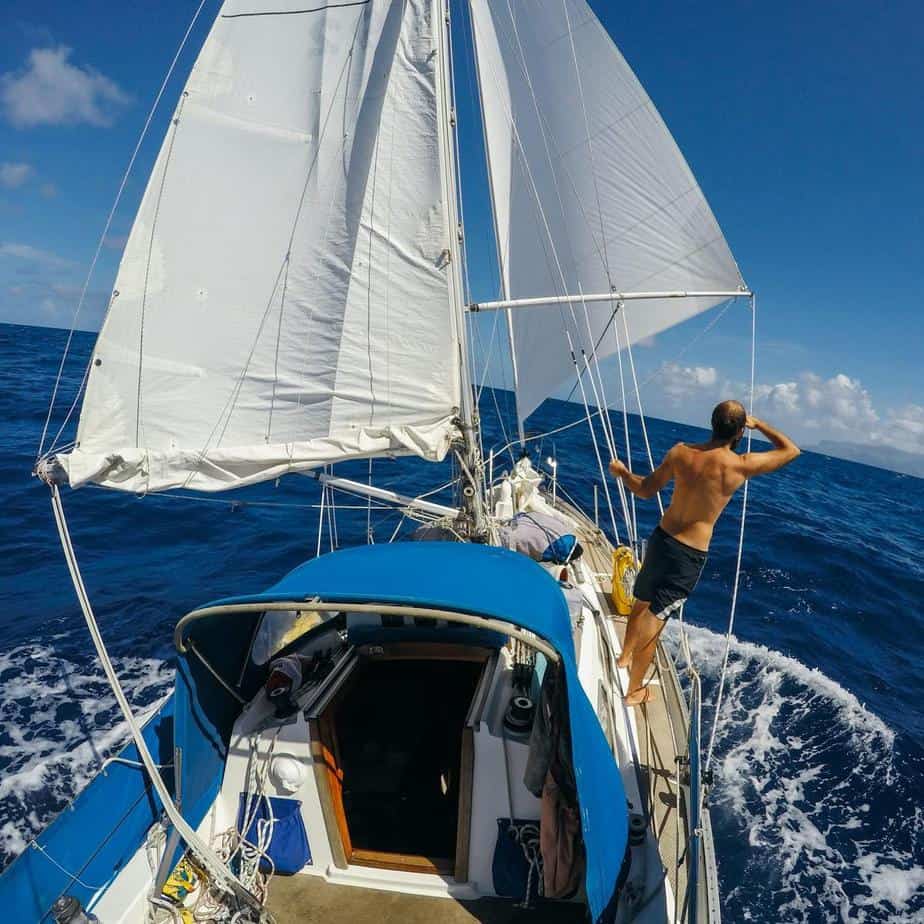 Thom D’Arcy sailing around the world in his Vancouver 28. Photo credit: YachtFathom.co.uk

A small sailboat can take you big places

Many sailors will tell you that small sailboats are the ticket to going cruising NOW.

They’re affordable, simple, and seaworthy…however, you’re unlikely to see many small sailboats in today’s cruising grounds. In three years and 13,000 nautical miles of bluewater cruising, I could count the number of under 30 ft sailboats I met on one hand (all of which were skippered by people in their 20s and 30s).

Today’s anchorages are full of 40, 50 and 60 foot plus ocean sailboats, but that’s not to say you can’t sail the world in a small sailboat. Just look at Alessandro di Benedetto who in 2010 broke the record for the smallest boat to sail around the world non-stop in his 21-foot Mini 6.5.

So long as you don’t mind forgoing a few comforts, you can have big dreams on a small budget. 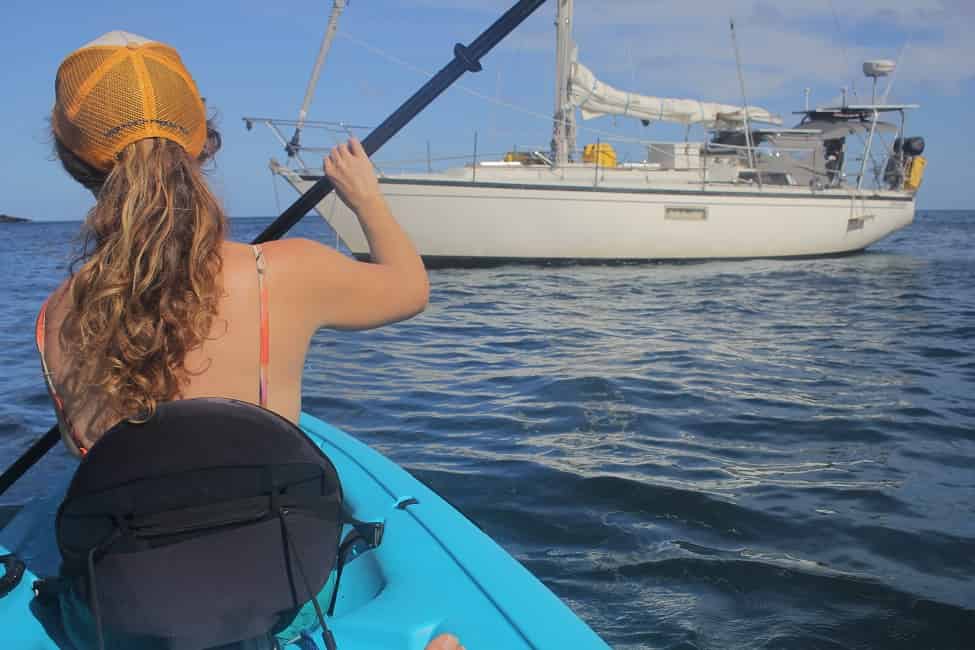 While you might not think a small sailboat is up to the task of going long distances, some of the best bluewater sailboats are under 40 feet. However if If you’re thinking about buying a boat for offshore cruising, there are a few things to know about what makes a small boat offshore capable.

A few feet can make a big difference over a week long passage. On the last leg of our Pacific Ocean crossing, our 35-foot sailboat narrowly avoid a storm that our buddy-boat, a 28-foot sailboat, couldn’t. Our friend was only a knot slower but it meant he had to heave-to for a miserable three days. 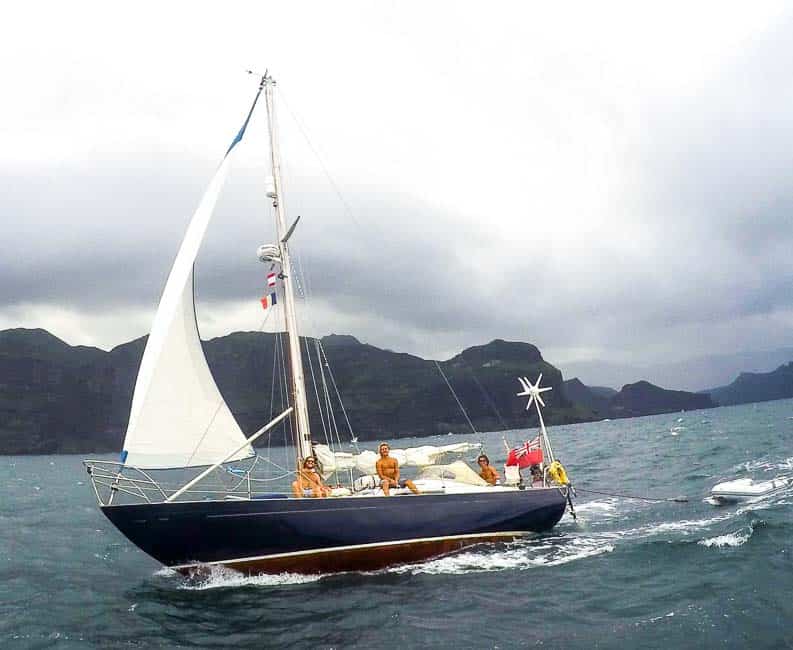 If a pocket cruiser encounters bad weather, they will be less able to outrun or avoid it. For this reason, many of the blue water sailboats in this list are heavily built and designed to take a beating.

Yacht design has changed dramatically over the last 50 years. These small sailboats are 30-plus year-old designs and from a time when weather forecasts were less accurate and harder to come by.

Back in the day, boat were constructed with thicker fiberglass hulls than you see in modern builds. Rigs, keels, rudders, hulls and decks – everything about these small cruising sailboats was designed to stand up to high winds and big waves. Some of the boats in this post have skeg-hung rudders and most of them are full keel boats.

The pros and cons of pocket cruiser sailboats

Their smaller size means you can generally get blue water sailboats at a better price point and the cost of parts tends to be lower. For example you can get away with smaller sails, ground tackle, winches and lighter line than on a bigger boat.

When something major breaks (like an engine) it will be less costly to repair or replace than it would be on a bigger boat. 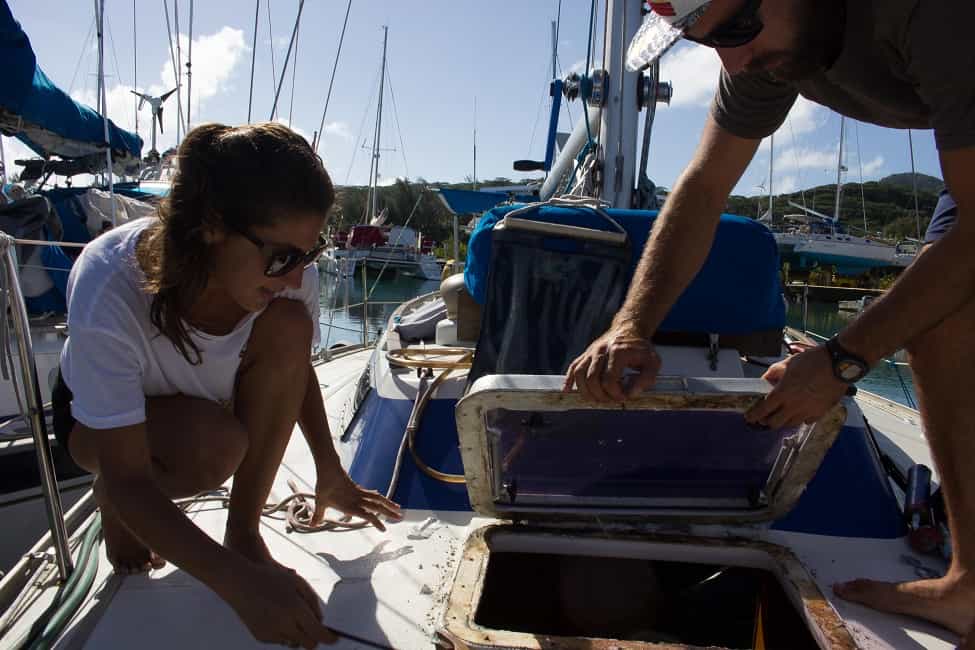 Helping our friend replace a hatch on her Dufour 29 (can you tell we’re obsessed with old Dufours?)

On a small sailboat you’re more likely to be taking bucket baths, collecting fresh water from your sails, and hand-bombing your anchor. Though less convenient, this simplicity can save you years of preparation and saving to go sailing.

Lastly smaller boats can be physically easier to sail, just think of the difference between raising a sail on a 25 foot boat versus a 50 foot boat! You can more easily single-hand or short-hand a small sailboat. For that reason, some of the best solo blue water sailboats are quite petite.

As mentioned above small boats are slow boats and will arrive in port, sometimes days (and even weeks) behind their faster counterparts on long offshore crossings.

Perhaps the most obvious thing about a small cruising boat is that they don’t provide much in the way of living space, creature comforts, and storage.

It also makes it more difficult to accommodate crew for long periods which means there are fewer people to share work and night shifts. 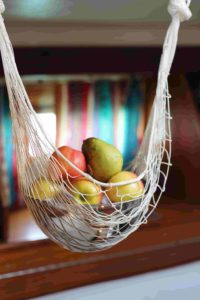 It’s not just the living situation that is less comfortable, the sailing can be pretty uncomfortable too! Pocket cruisers tend to be a far less comfortable ride than larger boats as they are more easily tossed about in big ocean swell.

When we sailed across the Pacific these were some of the small blue water sailboats that we saw 20 and 30 something sailing in. They loved them and we hope you will too!

Note: Price ranges are based on SailboatListings.com and YachtWorld.com listings for Aug. 2018

The Albin Vega has earned a reputation as a bluewater cruiser through adventurous sailors like Matt Rutherford, who in 2012 completed a 309-day solo nonstop circumnavigation of the Americas via Cape Horn and the Northwest Passage (see his story in documentary Red Dot on the Ocean).

The 5  best places to find small sailboats for sale. 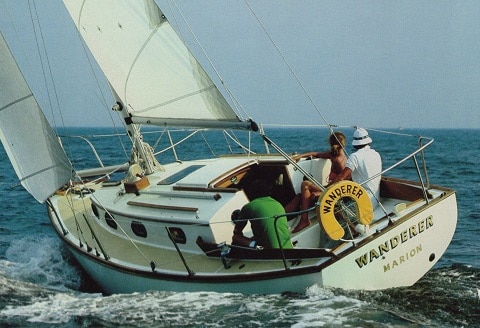 This small sailboat is cute and classic as she is rugged and roomy. With at least one known circumnavigation and plenty of shorter bluewater voyages, the Cape Dory 28 has proven herself offshore capable. 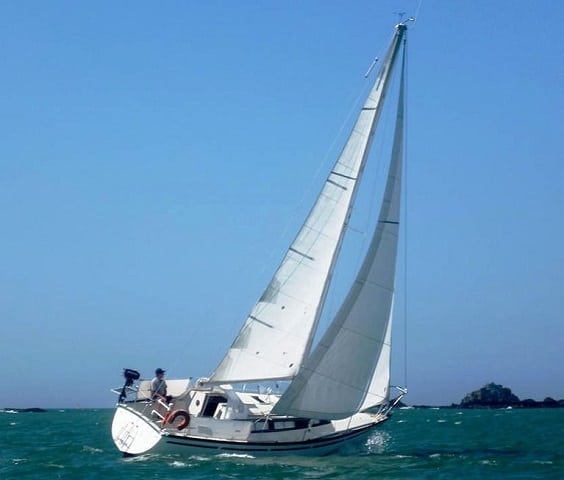 As small bluewater sailboats go, the Dufour 29 is a lot of boat for its buck. We know of at least one that sailed across the Pacific last year. Designed as a cruiser racer she’s both fun to sail and adventure-ready. Like many Dufour sailboats from this era she comes equipped with fiberglass molded wine bottle holders. Leave it to the French to think of everything! 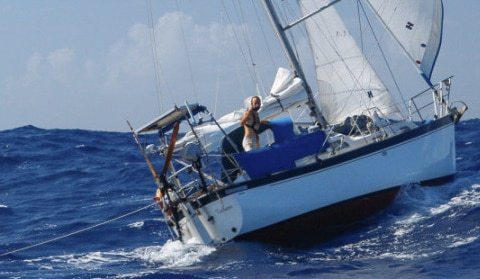 A sensible small boat with a “go-anywhere” attitude, this pocket cruiser was designed with ocean sailors in mind. One of the best cruising sailboats under 40 feet, the Vancouver 28 is great sailing in a small package. 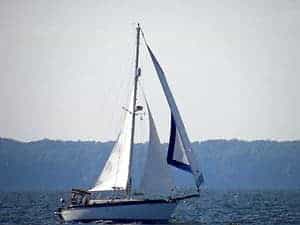 Described in the 1975 marketing as “a hearty little cruiser”, the Westsail 28 was designed for those who were ready to embrace the cruising life. Perfect for a solo sailor or a cozy cruising couple!

Feeling inspired? Check out the “go small” philosophy of this 21-year old who set sail in a CS 27.

Very useful list, but incomplete - as it would necessarily be, considering the number of seaworthy smaller boats that are around.

In particular, you missed/omitted the Westerly "Centaur" and its follow-on model, the "Griffon". 26 feet LOA, bilge-keelers, weighing something over 6000 pounds, usually fitted with a diesel inboard.

OK, these are British designs, and not that common in the US, but still they do exist, they're built like tanks, and it's rumored that at least one Centaur has circumnavigated.

This is a helpful list, thank you. I don't think most people would consider a 28' boat a pocket cruiser, though!