Over the last two years we’ve heard some pretty salty tales about a vessel named “Stay Gold”. This Lawson 30 has seen hurricanes, lost steering, and even washed ashore. She is however one hell of a tough boat, and absolutely refuses to die.

Our first encounter with this salty legend was in the anchorage in La Cruz, México where she broke from her anchor and proceeded to drift through 50 or so boats, somehow avoiding collision until she was caught by a fleet of dinghies and reanchored.

We recently met the uber-talented filmmaker and boat-hiker, Guillaume Beaudoin, who, it transpired, made, “Across the Salty Peaks”, a documentary about crossing the Pacific Ocean on Stay Gold. Not only is this some of the most beautiful sailboat cinematography that we’ve seen, but it’s also a fantastic tale about the rigours of crossing an ocean on a small boat. Having, recently crossed the Pacific ourselves and watched many boats struggle with major gear failures, I think this is a realistic peak into the experience of ocean crossing.

As we speak, Stay Gold (since renamed) is crossing the Pacific again with a new owner. It just goes to show how tough little glass sailboats can be.

Also, be sure to check out Guillaume Beaudoin’s current project, Across Salty Roads, where he films community driven ocean conservation as he boat-hikes across the Pacific. Our boat, Monarch, will appear in episode 3.

5 steps to quitting the rat race and going sailing 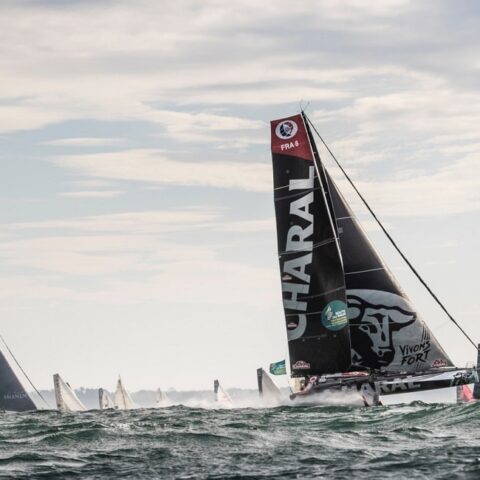 With the 2020 Vendée Globe less than a year a way, here’s some background on the race and five fun