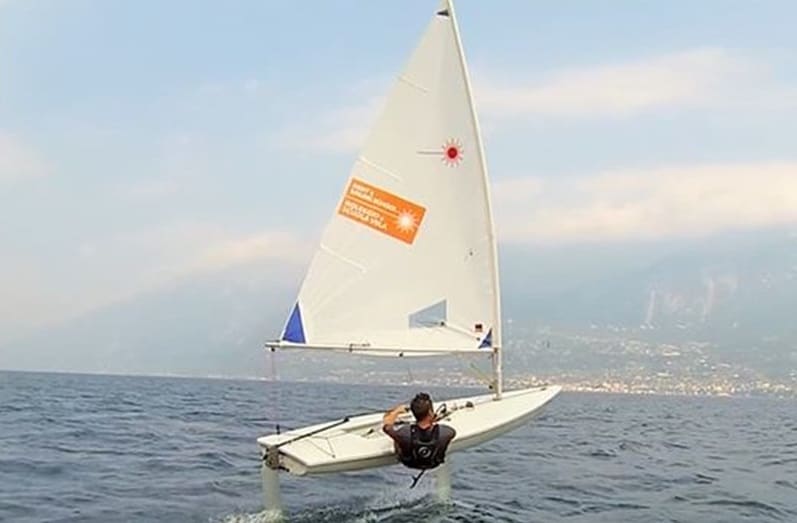 Watching foiling boats fly around the America’s Cup race course, is enough to quicken any sailor’s pulse. But unless you’ve got a spare few million kicking around, most hydrofoil boats are still very much out of the average boater’s budget. There are however a few ways to experience the magic of foiling without racing towards bankruptcy.

HOW DOES HYDROFOILING WORK?

Much in the same way that air flows over and under aircraft wings to create lift, water flowing around a hydrofoil lifts a boat’s hull out of the water. Once the greater part of the boat’s surface area is out of the water, friction is greatly reduced and the boat can “fly” at faster speeds.

Like sails, foils are not a matter of “set it and forget it”, instead the foil-attitude must be adjusted to keep the boat in flight. On the 2017 America’s Cup boats these adjustments were made by the skipper/helmsman but powered (via a hydraulic system) by crew grinding winches (or in New Zealand’s case, pedal bikes).

Because we don’t all have Jimmy Spithill‘s magic touch, developing highly sophisticated flight control systems is key to bringing foiling into mainstream boating. Candela, a new 25-foot production e-foiling powerboat (and 2019 Best of Boats award winner) offers such a solution with foils that change position 100 times per second! Still, at ~$240,000 it’s well beyond most boating budgets.

Clip a foil onto your Laser and fly over the surface of the water. Two Australian based companies, Foilsz and Glide Free Foils, offer Laser foiling kits. The Glide Free kit doesn’t require any permanent fixtures, so you can easily remove it (for those days when you’re in a displacement mode mood). They say that speeds of 18-25 knots are possible with their kit, which sells for just under $4,530 AUD (~$3,00 USD).

For a few bucks more you can buy a foiling catamaran. The UFO was launched in 2017 and can fly at 15-20 knots. With a price tag of $7,000, it may be the most economical multihull foiler on the market.

Some clubs and community sailing programs are adding foilers to their fleets. For example Nantucket Community Sailing offers a 3-hour semi-private class for $100 per person. Or if you’re looking for a more exotic locale, the Provela Foiling Centre in Spain offers a range of foiling classes from beginner to advanced. Their two-day “Try Fly – Foiling” class costs 200 euros and their fleet includes Foiling Moths, White Formula Whispers, WASPZs, and F101s.

It’s not like kiteboards are sluggish to begin with, but hydrofoil boards take the sport to a whole new level, delivering speeds of 40 miles an hour! By using a foil to lift their boards out of the water, foiling kiteboard enthusiasts get an exceptionally quiet and smooth ride – so much so, that kiteboard riders in Silicon Valley have been spotted taking calls on their cell phones. Set up costs start at around $1,000. Take a foil boarding course and buy protective gear, this extreme water sport is not for the faint of heart.

Foiling is taking off in the windsurfing world with world champions like Robby Naish and Atoine Albeau leading the charge. It has been confirmed that windfoiling will be a class at the 2024 Olympics in Paris. Set up costs start around $2,500.

With foiling technology trickling down into the mainstream, you can expect to see more and more high speed foiling boats and boards on the water. Is foiling the future? Let us know what you think in the comments below.