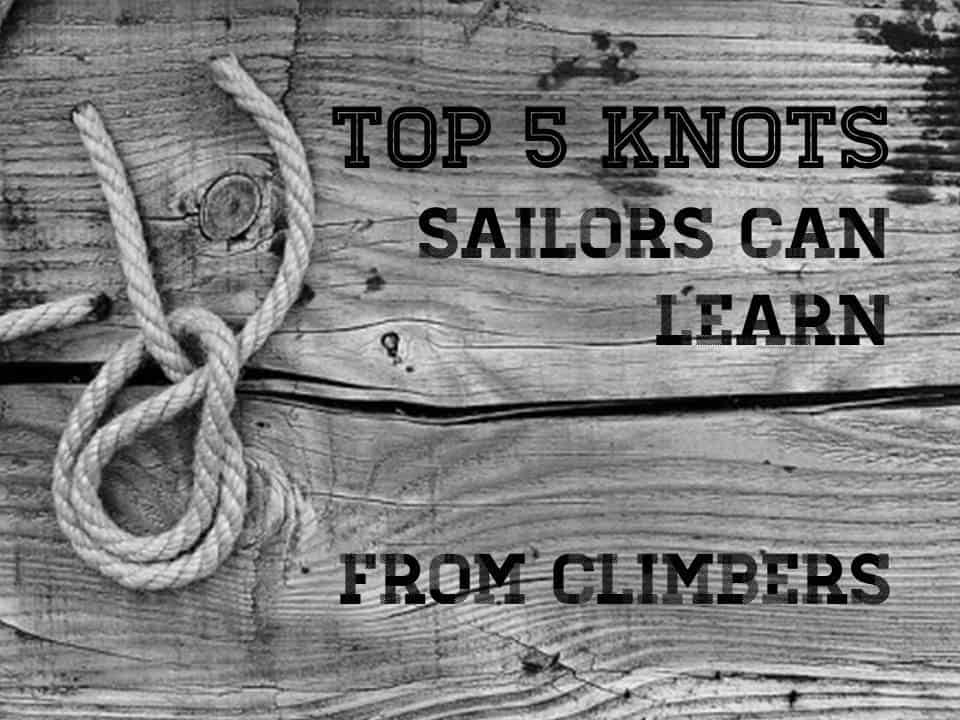 Climbing and sailing have a lot in common, not the least of which is rope and knots, if only they talked to each other a little more.  Below are the top 5 knots sailors could learn from climbers.

Sailors learn a version of the Prussic known as a rolling hitch.  It works along the same principles, but there are often times when the Prussic would be preferable.  A rolling hitch is used to tie one line to another and then pull on that line.  They are most commonly used when tying a snubber line to the anchor rode.  I used to do this until I realized a Prussic would perform much better.  The advantage of a Prussic is that it resists slide in both directions and has two tails which can be attached to the boat.  I attach the snubber line to the anchor rode with a Prussic and then run the tails back to opposite bow cleats to form a bridle.

The alpine butterfly is a beautiful knot.  Climbers learn it as a full-strength knot that can be tied in the middle of a rope.  It’s advantage besides being full-strength is that it doesn’t tighten on itself.  I use an alpine butterfly to attach a chain hook to the anchor bridle.  Most sailors will use an overhand loop, but after a night on the hook the knot has basically welded itself together.  An alpine butterfly is also very useful at the midpoint of a harness tether for short clipping to the jackline.

Sailors know how to tie clove hitches, but they do it differently than climbers.  A clove hitch is most commonly used to tie fenders to lifelines.  But how do you tie a clove hitch when there is nothing to wrap the knot around.  The climbing world has an answer. A clove hitch is a great knot for attaching bits of gear to oneself when going up the mast or to a work harness to keep tools from going over the side.

A long-tail bowline is a cool knot that can be used to multiply force without the use of pulleys or carabiners.  The slackliners in the climbing world are agog with this knot.  The tail of the bowline can be wrapped around an object, say a pad-eye or grabrail and then fed back through the bowline, and then pulled back towards the object.  The result is the same effect as using two pulleys (with slightly more friction).  This is a knot that is essential for lashing gear to the deck or anything else that requires a fair amount of tension.  I’ve used it to tension the rig and swap out a shroud and to hold down gas jerry cans on deck.

Just to mention that the second method of the clove hitch existed long before climbers have used it. This method is used by numerous dock handlers that tyes up boats to bollards...And bollards have been used for millenars. We must not forget that the world of sailing is at the origin of most knots. Christian Nadeau

I'm sure you're right. Actually most likely all the knots used in climbing have their origin in sailing. For some reason the knots in this article are more used by climbers now, or at least that's what I noticed from having a foot in both worlds. The history of knots would be impossible to write, but if somebody could, it would be a fascinating read.