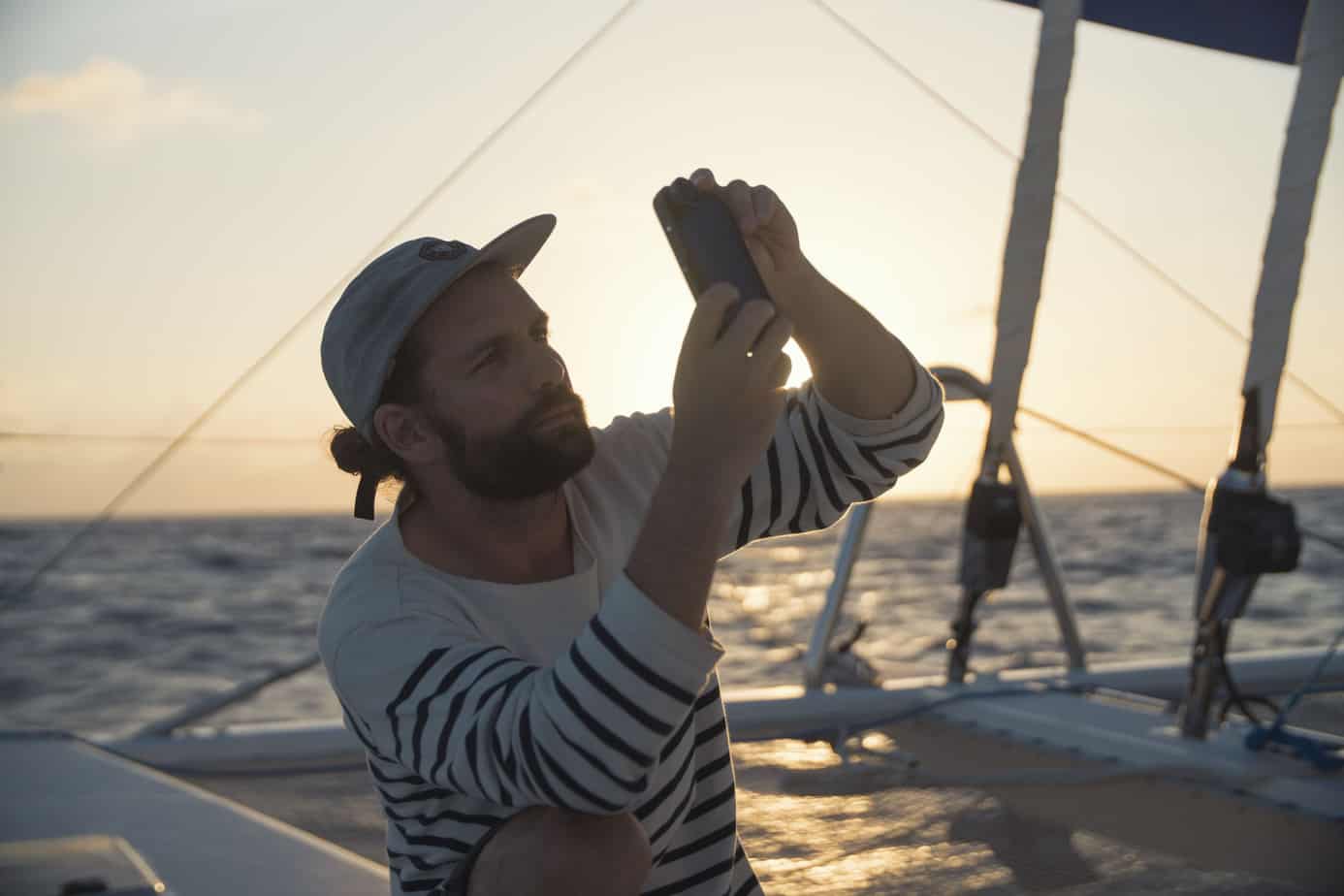 5 tips for filming your travel or sailing adventure

With the proliferation of inexpensive gear, and the success of vlogs like Sailing La Vagabond, more and more people are opting to film their sailing adventures whether it be for friends and family, documentary film fests, or Patreon funded Youtube channels.

We recently had the pleasure of interviewing Guillaume Beaudoin, a Quebec based director and cinematographer, who spends most of his year traveling around the world making travel and adventure TV shows and films (sweet gig-right!?). His work ranges from directing snowboarding, wakeboarding, and diving TV shows (you can check out “Les Flots” a diving show on TV 5 World) to his most recent project “Across the Salty Roads”, filming community driven ocean conservation as he boat hikes across the Pacific.

We wanted to know, “What advice would you give to someone looking to film their sailing or travel adventure?”, and here’s what he had to say:

Understand the upsides and downsides of documenting your trip.

The upside is, you’re going to get to go deeper into communities. If you’re conducting interviews and are genuinely interested in people’s stories, people are going to be more likely to open their doors and take you to places you would never otherwise get to go.

The downside is that you always have equipment to worry about and you always have to work. So you’re not as free as if you went on an adventure without filming it. I occasionally have moments where I just say, “Forget it, I’m going to just be in the moment and enjoy myself.” Most of the time I’m thinking, I have this article to write, or I need to play with these photos, or I should find some internet soon… All these thoughts take you out of the present moment. If you’re looking for an adventure where you want to have the time of your life and feel totally free, filming your trip is probably not the best way to do it. Really, it’s a 12-hour a day job.

Don’t worry too much about making things beautiful, start by focusing on having an original story. Even if you do beautiful shots, the story is the most important thing. Make a plan. Is it going to be narrated, shots of people talking to each other, shots of people talking to the camera? There are many different approaches. While you can just go with the flow and see what you’re good at, chances are that it’s not going to work that well. If you’re lucky you might have a great talent that reveals itself, but for most people its hard work, clear story planning and execution. You can’t try to go in all directions at the same time. You can really lose the mood or feel that way. Ask yourself these questions before you go and practice your approaches. I feel like the people with no experience who end up doing this best are people who are are naturally expressive and comfortable in front of the camera.

The biggest mistake I see beginners making is they make both their scenes and the video too long. For example, imagine you film something that’s really funny in the moment. When you go to edit, instead of looking at what you actually filmed you’re looking at the moment you had in your mind. The problem is that what’s fun or funny to you, is not necessarily what people who are watching are going to enjoy. You have to create distance from yourself. So a lot of people end up putting in way too much stuff to explain a scenario that doesn’t really add anything to the story. Same thing with beauty shots. If you’re trying to make it beautiful, don’t put 12 sunsets and each sunset for 5 seconds. A 1 second sunset is enough. I’d say, a good rule when you start, is cut everything by half.

Whenever you see something cool, tell yourself this specific moment will never ever happen again and take the shot. Like say you see tons of fly fish, but you’re in the middle of doing something. You drop what you’re doing and get your camera and film them. It’s the same thing with interviews. If you meet someone interesting, interview them on the spot. It’s tempting to say, “Oh, we’ll come back and interview them later,” but 99% of the time you never do.  Usually there are distractions, you’re off on another part of the adventure, the light has changed… Be disciplined, when the moment is there, capture it.

5)    Choose the right gear for your needs

I’ve gone on trips like this before, and my work in adventure shows means I am always on the road. So I’ve really figured out the best tools for my style. I carry a range of gear because I like to get as much variety as possible: underwater shots, drone shots, lots of slow motion, wide-shots, etc. But it doesn’t have to be like that, a lot of people just use their go pros. The technical stuff is only 5-10% of the finished result (story is way more important!) For someone who is just getting started and has a $1000-2000 budget for camera gear, I’d recommend starting with a little mirrorless Sony or Panasonic $500 camera, one or two lenses (wide and zoom). Practice making movements with your body so you don’t need (or have to carry) a slider. For those who are interested in a bigger set up, here is what I travel with.

Note: the remainder of this article contains affiliate links, so if you purchase an item through a link a small percentage of that purchase goes to supporting Young & Salty.

Cameras: I have a Sony A7S MK2 (great camera for lowlight), a Sony A6000 (smaller sensor and better for photos), and a Sony RX10 iii (probably the best tool I have!). The RX10 iii has a 24-600 mm zoom that does 244 fps on burst mode. If I had to choose one camera it would probably be this one. It doesn’t go super wide, that might be the downside, but it allows you to do some pretty awesome things like filming water on a very tight zoomed in screen with 244 fps. With slow motion you see all this cool detail and movement that you can’t see with the naked eye. Same for filming dolphins and flying fish.

Lenses: You need a wide angle lens, especially on a sailboat, in order to capture things like the sails and a good zoom to make things like waves look as big as they are. I have a 24-70mm main lens, a 16-35mm wide angle, and a 24mm fixed opening for shooting in lowlight (great for shooting stars on the A7S). Internally stabilized lenses are great if you’re moving around a lot (like on a sailboat).

Under water: I have a small Sony lenses that fit inside the waterproof case for my A7S. I use a Gopro for quickly getting the shot, and then I’ll often go back into the water with my A7S. GoPros are actually amazing when you have the right settings and work with the colors in post production, you can get a really cinematic look. I have something called a Hit Case, a water proof phone cases with interchangeable lenses for the iPhone. I’ve used it a bunch of times and it’s super cool to have because you can carry it in your pocket.

Drones: I have a Phantom 4 (a bigger drone) and a Maverick (a smaller drone).

Other gear: I also have a small stabilizer Glide Cam 1000, it helps for adding some movement depending on what you’re doing. I carry a battery charger pack called Omni charge, which will charge up my computers ¾ of the way but also phones, speakers, satellite phones etc.

Thanks for the heads up Mark, much appreciated

Hi guys!!! Great articles. Bummed we didn't spend more time with you in La Cruz. Hoping we get to spend more time on the ocean with you soon. Fair winds. -Josie Lauducci and A Family Afloat

Thanks guys! It was great meeting you in La Cruz. Hope we get to catch up in an anchorage one of these days.